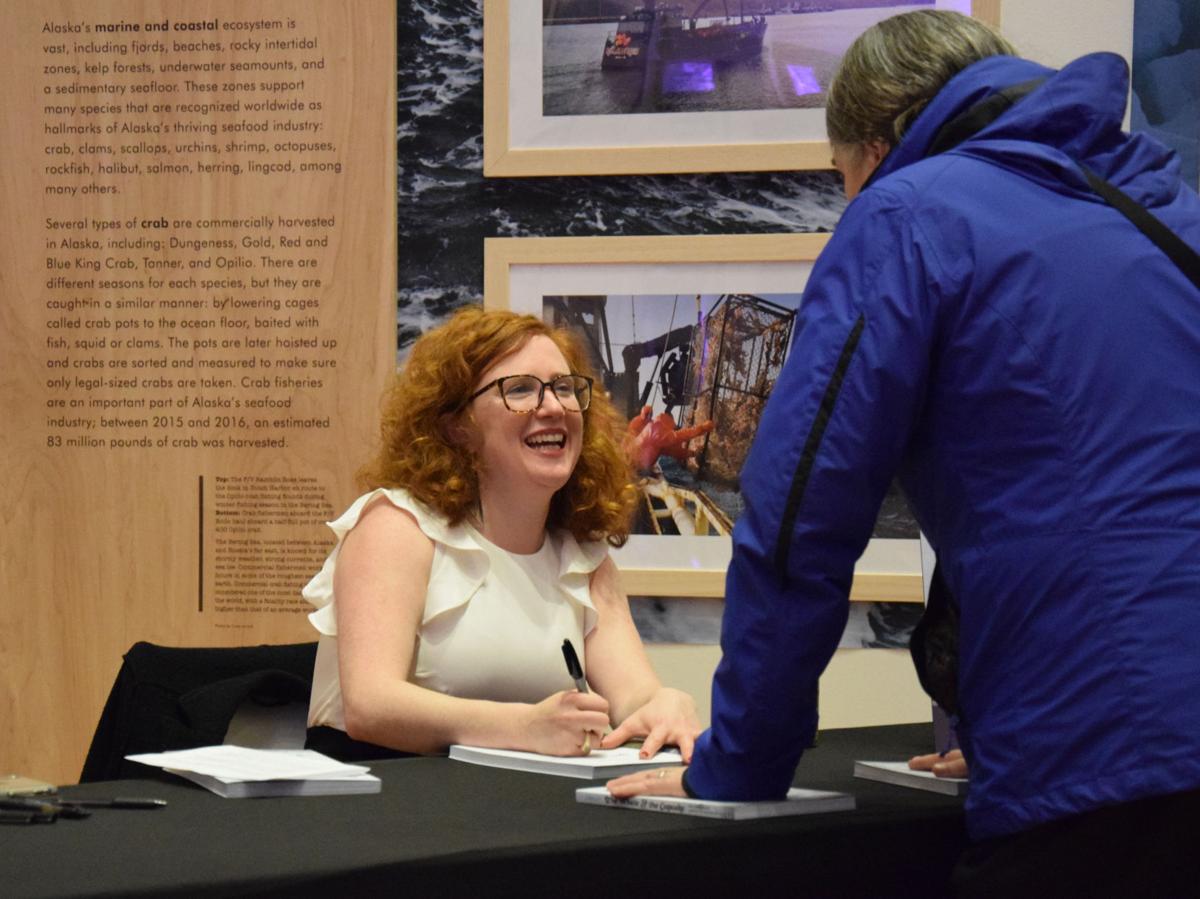 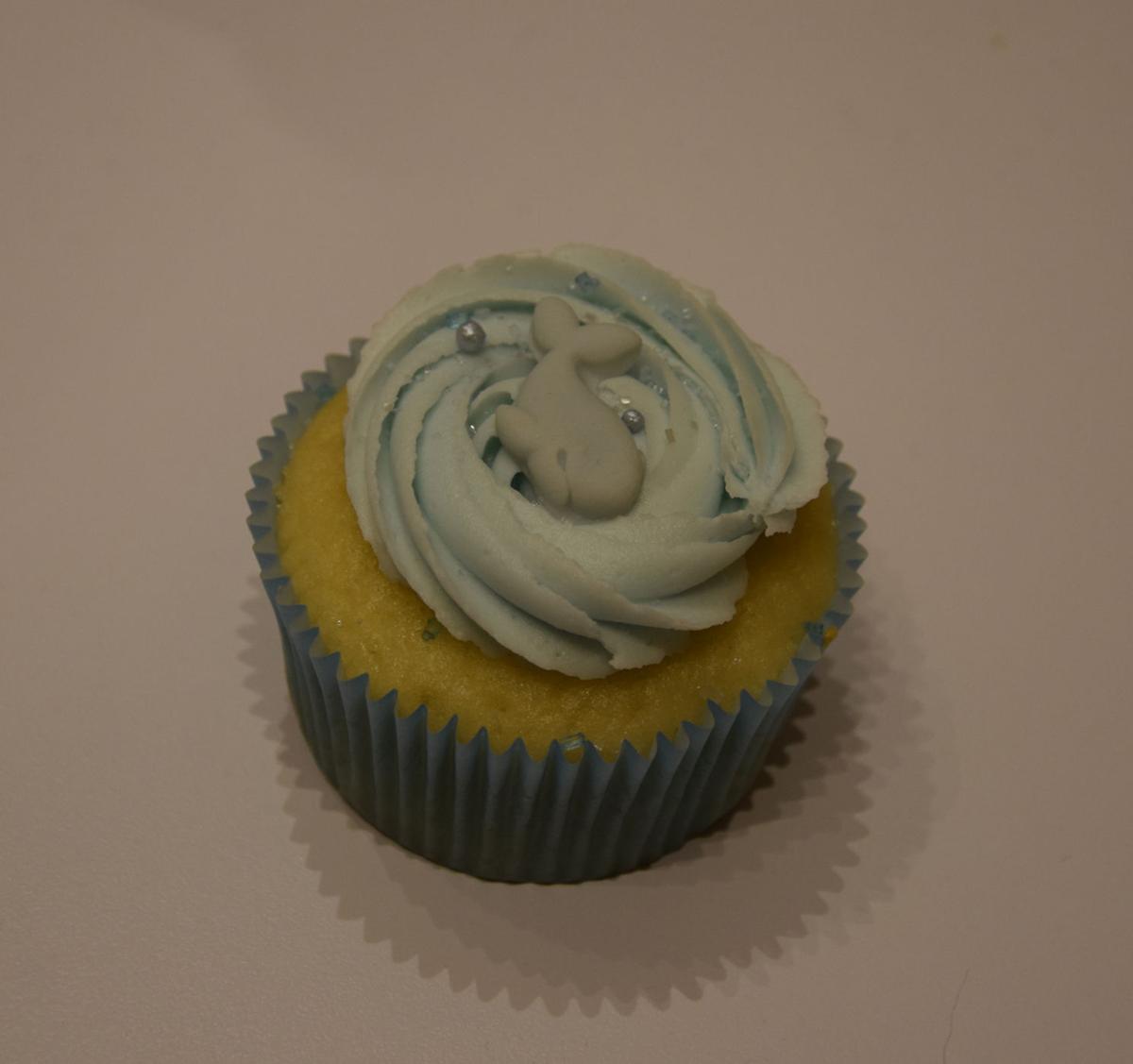 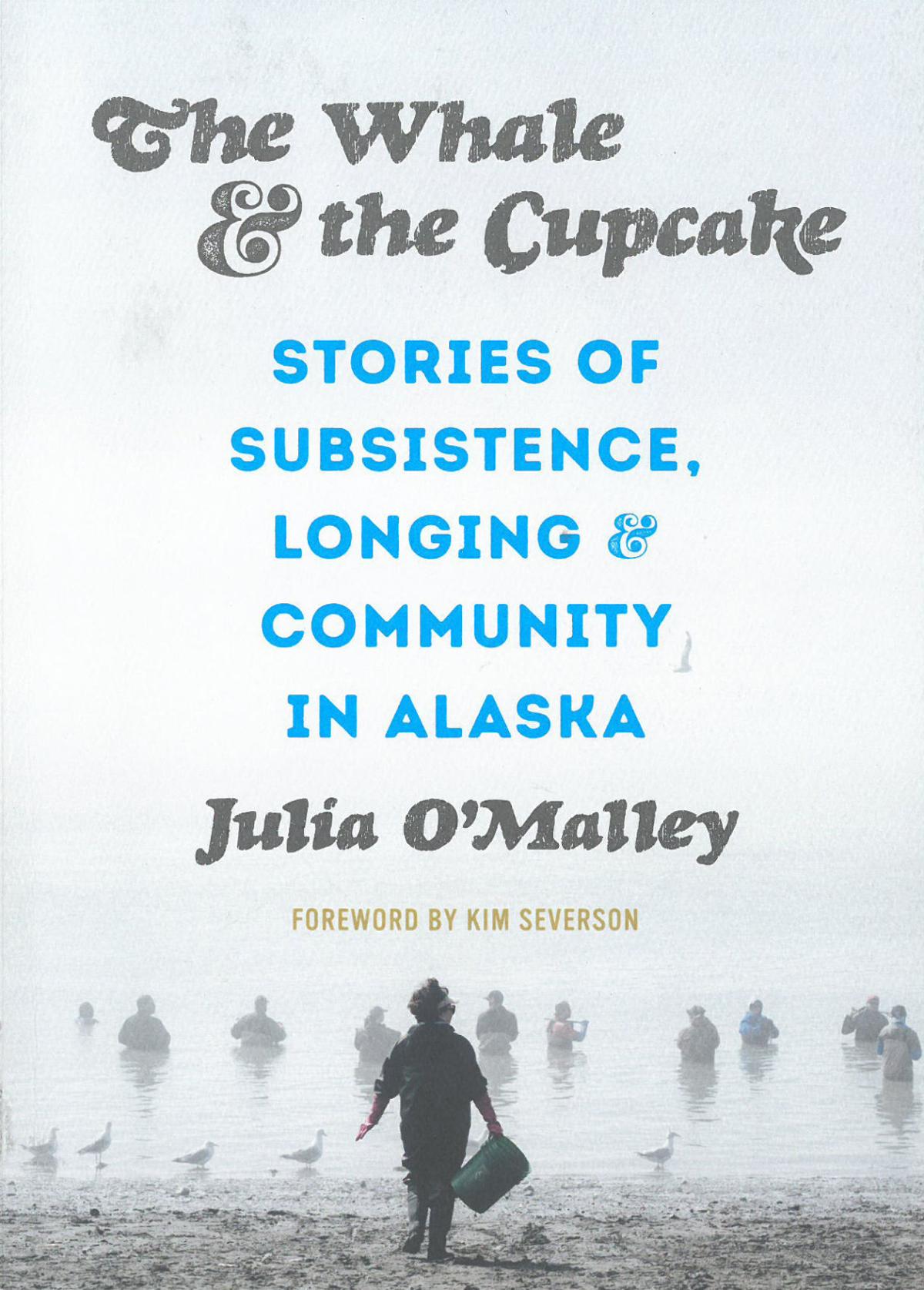 By Art Sleuth by Jean Bundy

It’s December’s first Friday at the Anchorage Museum, and I’m looking at the crowd lining up to buy/have autographed Julia O’Malley’s cookbook: ‘The Whale and the Cupcake’. O’Malley sits nearby, Sharpies at the ready, lovingly writing personal notes (even to strangers) in each book. Her broad smile beneath red hair and large glasses presents a contrasting sassy/academic demeanor, especially when someone gives her a hug.

I muse, it’s another Alaskan cookbook; so who cares? True, we are in a nationwide foodie craze again, just as we were in the Vietnam era. Perhaps we turn to noshing in times of national angst? Back in the late Sixties when my husband was in law school, I was the Harvard Law Wives cooking chair. It was no big deal to bump into Julia Child at the grocery store, as the group imagined ourselves the French gastronome Brillat-Savarin (1755-1826) while devouring ‘Gourmet Magazine’ and MFK Fisher (1908-1992) food essays.

I first met O’Malley in the nineties, when she and my son Elliott were teen reporters on the now defunct ‘Perfect World’ section of the Anchorage Daily News. Since then, and in spite of being born into Alaska-multi-generational royalty, O’Malley has acquired her own journalistic voice, and deserved following. I decided after reading her book, O’Malley is a modern MFK Fisher, essaying culinary adventures, while not afraid to admit personal kitchen foibles.

I grew up in post-war Boston where winter fruits and veggies were commonly dried out (no Chilean crops), so withered produce didn’t shock me when I first entered Safeway on Gambell (relocated) summer 1971. The pork chops I bought during the freight strike had green slime.

Briefly: The Whale and the Cupcake Julia O’Malley begins by referencing Bush eating: subsisting off the land, while supplementing with store bought ingredients like cake mixes. Mayonnaise and Sprite are stand-ins for milk and eggs, when cake making for ‘fundraiser-cakewalks’. Seagull eggs are used too. Orange Jell-O mixed with berries makes frosting. Self-reliance, interconnectedness and respect are buzz words that permeate this cookbook, along with foods as metaphor for place, sharing, and memory. O’Malley’s uber-tested home recipes and vivid texts testify that living in a state with economic and transportation limitations, cultural diversity and now Climate Change, all pose culinary challenges, but can be creatively sidestepped.

O’Malley composes visual verbiage gleaned from statewide travel as she discovers/comments on Alaska’s regional cuisine. Her descriptions of Arctic whaling and resulting village food distribution are clear: “During feast time, women related to a whaling captain’s crew work nearly around the clock preparing whale and other traditional foods to share… they pulled big metal bowls of melted caribou fat from the oven and set them on the floor. As soon as the liquid fat cooled enough to be touched, they began to whip air into it with their hands, making akutuq—Eskimo ice cream. When the fat took on the texture of whipped butter, they drizzled in seal oil, added meat and berries, and then chilled it (O’Malley 21, 24).”

‘Pho’ shops have sprung up in Anchorage, a reflection of varied Pacific Rim ethnicities. O’Malley reports, “The state has more biracial people, by percentage, than any other place besides Hawaii, according the US Census (O’Malley 5).” Having learned to pronounce ‘Pho’, I will be more adventurous trying one-bowl noodle soups with their piping hot ‘slow-simmered bones’ and tossed in greens and meats. Of note: “One in ten people in Anchorage is Asian (O’Malley 53, 69).”

“I come from pie-making people,” writes O’Malley, who invites readers into her home where she’s not afraid to fumble recipes. Becoming a competent pie-man is hard, but O’Malley insists, “Every Alaska cook should have a pie recipe up their sleeve (recipe: Foolproof Wild Blueberry Pie, O’Malley 72-74).”

O’Malley’s tome rekindled my family’s blueberry memories: My dad, who died when I was in college, was a World War II naval officer, stationed in Marseilles/Toulon, decoding via telegraph. He passed up seeing Charles De Gaulle for a piece of blueberry pie. Dad’s longing for once again summering on Martha’s Vineyard was ingrained in those wartime berries.

O’Malley remains nonchalant when it comes to Spam being too processed or fried donuts being too sugary/caloric. However she includes RurAL CAP’s CEO, Gary Ferguson, who believes that a traditional Native subsistence diet of “healthy proteins, healthy fats, and less grains and processed carbohydrates” is far superior to convenience foods. Counterpoint makes good reading: Clark Lane, VP of Pt. Hope village corporation (Tikigaq) announces, “I don’t want to live the way I did long time ago (O’Malley 24-25, 95).” ‘The Whale and Cupcake’ documents what Alaskans eat, so readers can opinionate.

O’Malley is at her best when recounting a visit to her wife’s cousin, Emily, who farms (butchers) pigs in Homer. Small farm-to-table establishments (some are eateries) are becoming more common in Alaska. Self-cultivation is arduous, and often means finding employment off-farm to make ends meet. Ironically, Climate Change which is impacting Arctic subsistence is creating longer growing seasons statewide. According to Carrie and Sharon owners of Two Sister’s Bakery Homer, “We get cases of apples at the end of summer in the past five years that we never did before (O’Malley 119).”

The Sleuth insists ‘The Whale and the Cupcake’ (at the Anchorage Museum Shop or on Amazon) is a good stocking stuffer, unpacking eating from a perspective of the Alaska everyman. Space is always an issue, but I wish the Costco essay had been longer. This cultish emporium that changed Alaska’s food shopping with its elephant-in-the-room presence, brought in fresher produce, lower prices and increased competition.

Like most grocers in the 49th state Costco caters to both urbanites and Bush shoppers, who don’t stock their pantries the same way. O’Malley’s intimate chapters overflow with charm and each could easily morph into future cookbooks.