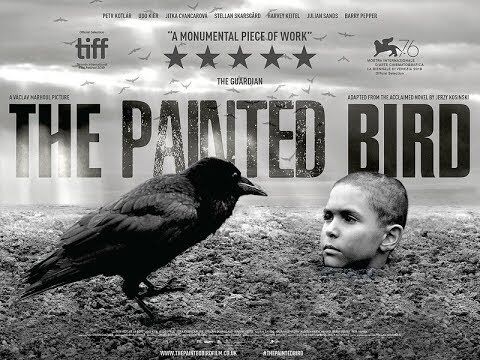 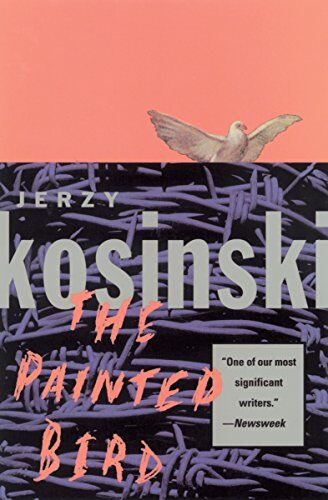 I had just finished Jerzy Kosiński’s quirky satire ‘Being There’ when I wandered into Powell’s bookstore in Portland to find a copy of ‘The Painted Bird’. There was only one; a worn, black-covered second edition from the seventies. I nearly decided to look elsewhere because of its condition, but there was no time as I had a flight to catch.

That was three years ago, and I can still remember the train or ferry or park bench I was on during every haunting moment of the boy’s journey. The book, like the film that was recently released via VOD after its festival run last year, was highly controversial following its 1965 publication. Kosiński, born in Poland in 1933, was accused of plagiarism or not writing the book at all due to his lack of knowledge of the English language at the time of its original release. Kosiński claimed that two Eastern Europeans broke into his New York apartment with intent to beat him with steel pipes because of the way their country was portrayed. Poland refused to publish the book until 1989.

I wasn’t aware of this as I read through the war-time horrors the young protagonist faced. The cruel behavior of the peasants and soldiers was raw and written so matter of factly. The boy’s loss of innocence was brutal, his yearning for acceptance tragic. His entire journey was heartbreaking. All of this was captured in Václav Marhoul’s adaptation.

I know, I know, film review, NOT book review. But the book and its history are important contextual references that seem to be missing in some other reviews I’ve come across. Marhoul understood this. The lack of distracting composition within the book’s pages is emphasized by the film’s absence of score. No somber cello, just the creaking sounds during one of the darkest moments in human history. Vladímir Smutńy, director of photography, stayed poised. He lingered, letting each frame sink in. Filmed in black and white, every shot had a firm grasp of place. It was beautiful, sharp, haunting. It had to be with the minimalistic use of dialogue.

Disturbing human behavior can be its own language. The film is stitched together through nine vignettes as the nameless boy, played as well as one could expect by Petr Kotlár, tries to find his way home and survive an unforgiving landscape.

The attention to detail was spectacular as nothing seemed out of place, whether it was a clothes pin or the way a character washed her feet. There were smatterings of hopefulness, such as near the beginning when the boy plays Beethoven’s Für Elise on the piano or the end when he remembers his name, but this adaptation gave Kosiński’s novel exactly what it deserved: bleak honesty.

Marhoul spent years gathering money to fund his production and meticulously shot the film over a period of 16 months. I can’t disagree that the film is a hard watch. Some moments force the viewer to squirm or cringe more than others, but every time I did, I was brought back to the same uncomfortable reaction I had as I read the book. The film didn’t beat me over the head with its themes; it simply told a story — one full of horrors and inhumanity often bred by fear or ignorance.

Kosiński claimed that a benefit to writing the novel in English, which was his second language, was that the words read with an emotional detachment. The Painted Bird is a story about survival as much as it is a deploring of human barbarity. The Nazis aren’t the antagonists but rather it’s their cruelty which had leached into the counties and villages and into the bloodstreams of non-Germans in a war-exhausted Eastern Europe.

Every actor seemed extremely committed to their roles. Besides Kotlár, all the performances were basically cameos with varying degrees of screen time. The wrinkled faces and aged bodies were accentuated by the patient cinematography shot in black and white. Being a Czech film, most of the actors were not recognizable to me, making the Keitel or Skarsgård sightings, among a few others, both distracting and welcome.

For some viewers, the odd use of a Wilhelm scream might be a reminder you’re watching a film in the midst of a village raid by a group of Cossacks, momentarily snapping you out of the can’t-look-away trance Smutńy lulls you into with his camerawork. Look, I’m not saying you should watch this film but, if you do, reading Kosiński first would help prepare your eyes. Its vision is heavy and cold. It is also a magnificent and honest adaptation of a book that was highly controversial during its own time. That being said, calling the film highbrow torture porn is ignorant. From a technical perspective, it is rather incredible. The use of sound, the removal of color, the performances, and the patient direction hold this film up above content critics who don’t seem interested in where the content originated. And if your criticism is solely with the content, you are some 55 years late.

“Had I foreseen what it would become,” Kosiński wrote in 1976, “I might not have written The Painted Bird. But the book, like the boy, has weathered the assaults. The urge to survive is inherently unfettered. Can the imagination, any more than the boy, be held prisoner?”

Marhoul’s decision to use Interslavic for most of the dialogue, making it the first film to use the language, succeeded in keeping the locations and ethnicities vague, much in the same way Kosiński never divulged where the book took place within Eastern Europe. It didn’t matter. It wasn’t supposed to matter. Human savagery, when incubated, knows no borders.

Logan Harrison is a writer living in Anchorage.