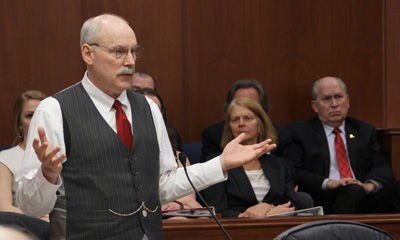 During this election cycle there are a number of state senators who will be up for reelection. Those senators who are going before voters this year are part of the ‘Stedman Wing’ of the Senate Majority who have been trying to pursue a rational approach to the fiscal crisis the state faces. One of those senators who has been a steadfast and loyal member of that faction is Senator Gary Stevens (R-Kodiak). He has the distinction of being a quiet leader who works behind the scenes to ensure the Senate is working properly and goes to great lengths to protect his colleagues.

He is widely noted in the Capitol for his skills at negotiating compromises on legislation and for his efforts at trying to diffuse tension between members of his caucus. He has refused to go along with Gov. Dunleavy and his populist Libertarian agenda and because of that he has become a target for members of the valley faction of the Senate Majority. Members of that faction have reached out and recruited an opponent for the upcoming Republican primary race in his district. His opponent in his race is another valley populist who is targeting him over not supporting a $3,000 dividend and being a member of a binding caucus. It is important to note that his opponent has no chance of beating him in his district as the Republicans in Kodiak are not populists and value the effective representation Senator Stevens has provided.

But while his opponent may very well be defeated it is critical for Alaskans to understand who Senator Stevens is and why his service in the Senate is so critical at this present moment in our history. Senator Stevens has served in the Senate since the year 2003 and before he served in the Senate he was for a brief time a member of the state House of Representatives. Before that he served on the Kodiak Borough Assembly and then became mayor of the Kodiak Island Borough. Throughout his service in elected office he has always put the needs of his constituents over his own and has diligently worked to become a master of the legislative process. In 2007 he along with then Senator Johnny Ellis put together what became known as the Senate Bipartisan Working Group which was in place until the 2012 election cycle.

That bipartisan coalition formed under the auspices of ensuring the state had a stable financial future. To that end, with his and Senator Bert Stedman’s leadership, the coalition put away hundreds of billions of dollars into the state’s savings accounts. The actions he and Senator Stedman took during that time is the reason the state has been able to survive so much of the fiscal crisis it is in. He is the most experienced member of the Senate Majority in that he has held every leadership post one can hold in the Senate except being a co-chair of the Senate Finance Committee. In terms of the committee posts he currently has he is the chairman of the Senate Education Committee, Legislative Council, and the vice-chairman of the Senate Labor & Commerce Committee.

Given the dire condition of state finances it is important for him to be sent back to Juneau next year to help guide his colleagues toward solutions to the fiscal crisis that will put the state on a better path. In particular given his institutional knowledge and moral character and the challenges that the Dunleavy Administration presents to Alaska, the Senate Majority cannot afford to lose him.

Voters in his district need to weigh very carefully a record of proven leadership versus a valley populist with no plan and an extremist agenda.