The 2020-21 United States Senate runoff elections in Georgia, Those that led to the election of Jon Ossoff and Rev. Raphael Warnock, were the most expensive Senate Races in U.S. History. They were also a prime example of how a plan that’s too cute by half, backfires.

Should you not remember, this election took place right before the horrifying riots at the U.S. Capitol. Tensions were high all over the country as the President and some of his most loyal allies were claiming fraud, that the November election had been rigged. Just before the election, the President held one of his big GOTV rallies in Georgia for the incumbent U.S. Senators. The strategy was clear: use the anger and frustration stemming from his accusations of fraud and ‘Stop the Steal’ to turn out every single base voter in order for the two incumbents to prevail. He blasted Republican state officials – including the Governor and Secretary of State – and made it clear that participating in the upcoming runoff elections was the way to fight back.

The strategy backfired. It was too cute by half. Turnout in rural parts of the state – exactly where the Trump GOP was trying to turn out everyone and anyone – was unexpectedly low. Many political pundits have argued the President’s tactics were just too much. His attempt to transfer anger and frustration had the reverse effect. Those who needed to vote, didn’t.

Alaska in 2022 may provide another prime example of a ‘too cute by half’ strategy destined to backfire. Particularly, the strategy that has been implemented to get Lisa Murkowski (a wildly disliked incumbent) re-elected seems to be on a path to in fact give a Democrat or Democratic-leaning independent a unique opportunity to win. The strategy was the passage – with millions of corporate dollars – of Proposition 2 on the November 2020 General Election ballot.

For much of 2019 and 2020, top Lisa Murkowski thugs – such as her former campaign manager – bullied local Democrats into thinking Prop 2 was going to be good for the state and for the party. These folks had fancy reports and research inquiries – all funded by people such as Tom Arnold (the right-wing charter school fanatic) and lobbyists – which they would cleverly present to local Democrats simply as a means of tricking them into either supporting the initiative or staying neutral. They thwarted any attempt to fight against Prop 2 by personally smearing individuals associated with the “No on 2” efforts. It was disgusting politics.

The Prop 2 team had spent months telling folks how they know the numbers better than anyone and that Prop 2 would pass with at least 58 percent of the vote. After all, they massively outspent the “No on 2” efforts. They barely won the election. Their math was wrong, and it almost cost them victory.

As the main result of Prop 2 – various other sneaky things were embedded in the language of the initiative – the state will now have an all-party primary in August and the top four vote-getters will head to a November General election in which ranked choice voting sets in. This system (which many municipalities around the country are now getting rid of after seeing it fail) allows voters to rank their vote across the four candidates, if they’d like to. That means you can pick a first, second, third, and fourth choice. After the initial vote, those who come in third and fourth places are disqualified and their ranked votes (the choices from their voters for third, second and first) rank up to the first and second place finishers. That’s how someone ultimately gets a majority.

It’s convoluted — and too cute by half — but the crux of the strategy as it relates to the U.S. Senate race is/was as follows: assure Murkowski a second-place victory so that she receives the second choice votes of the likely third place contestant, who is bound to be the Democrat.

The Murkowski strategy assumes she can find enough votes to come in second and that enough Democrats and Democratic-leaning independents will do what they’ve done before — have her back, this time, by listing her as their second choice.

The problem is, however, Lisa Murkowski is wildly disliked. 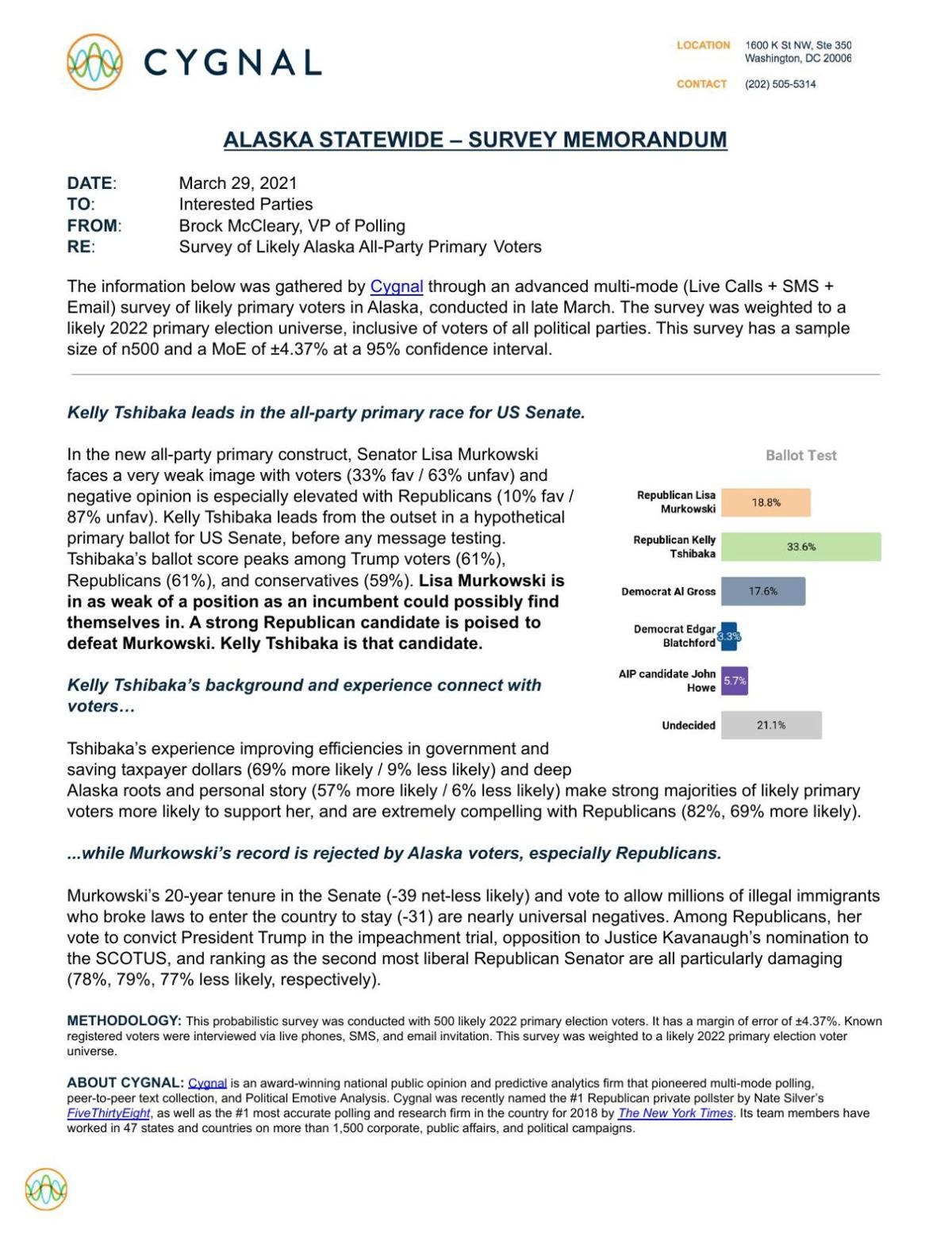 As the poll showed (and various other polling has apparently demonstrated, though hasn’t been released), Lisa would have a very hard time coming in second. Remember, even in 2016 when the Democrats didn’t field a strong candidate, the combined vote between Ray Metcalf (the nominee of the Democratic party) and Margaret Stock, the Democratic-leaning independent who raised only $400,000 was 25 percent.

Given that the electorate regularly describes itself as anywhere from 29 percent to 32 percent ‘Democrat,’ which includes some independents who just don’t register as Democrats, it will be very hard for Lisa to garner enough votes to come in second behind the preferred Republican, who will likely receive 40 percent of the vote.

So, let’s keep it simple: 40 percent for Kelly Tshibaka, 33 percent (maybe slightly more or less) for a well-funded Democrat and 6 percent for an AIP or Libertarian type coming in fourth. That leaves only 21 percent or so of the vote Lisa.

That puts her in third, with most of her second-choice vote going to the Democrat, giving them a real path to the 50 percent threshold against a very right-wing and outside the mainstream Kelly Tshibaka.

The Murkowski people will try to keep a strong Democrat out, but they will fail. They are just too cute, by half. They may have just given the Democratic party a way back.