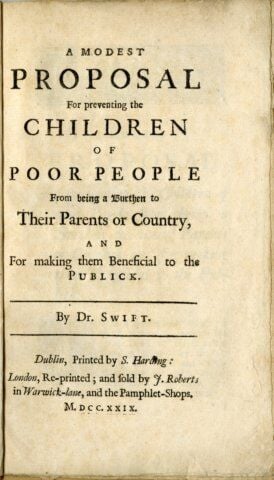 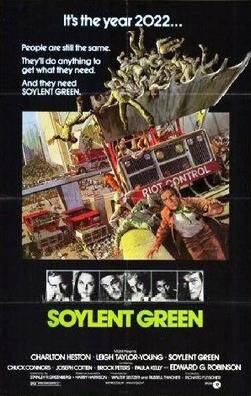 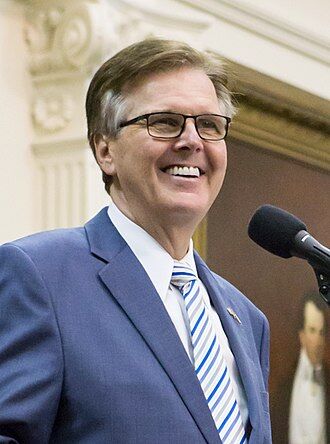 “I have been assured by a very knowing American of my acquaintance in London, that a young healthy child well nursed, is, at a year old, a most delicious nourishing and wholesome food, whether stewed, roasted, baked, or boiled; and I make no doubt that it will equally serve in a fricassee, or a ragout.”

In March of 2020 the Lt. Governor of Texas, Dan Patrick, advocated opening up the economy despite the pandemic and despite the advice of most public health professionals. He believed this strategy would be dangerous to older persons, but he also believed that they should be willing to be sacrificed if that helped to promote economic growth. This is an old idea, but was now couched in a more modern, obtuse, and indirect manner. But first a bit of cultural context...

Jonathan Swift’s essay, quoted above, is one of the best-known essays of all time. Commonly called “A Modest Proposal,” the full title better prepares the reader for the satirical tour de force: “A Modest Proposal For preventing the Children of Poor People From being a Burthen to Their Parents or Country, and For making them Beneficial to the Publick,” written by Jonathan Swift in 1729. Swift was Dean of St Patrick's Cathedral, Dublin, and a well-known writer in his day. He was horrified at the callous attitude of the aristocracy to the poor, and especially to the Irish, so he fought the outrage using a weapon with which he excelled – satire. In a straight-faced argument from start to finish, the essay proposes to alleviate poverty in Ireland and Britain by encouraging the poor to sell their babies to the rich, who will have them prepared as a gustatory delight, and eat them.

The second quote above is from Soylent Green, a 1973 American movie featuring a dystopia in the distant future (2022!) when the cumulative effects of overpopulation, pollution, and global warming (really!) have caused severe worldwide shortages of food, water, and housing. Soylent Industries controls the food supply of half the world and sells wafers purportedly manufactured from soy, lentils, and plankton. Overpopulation is managed via the heavily promoted use of “euthanasia centers,” and by police who operate huge street shovels that scoop up the hungry masses and deposit them into massive bins. (Spoiler alert ahead!) The euthanized as well as the living but boxed-up demonstrators are secretly transported to “reclamation centers” where they are turned into “Soylent Green” crackers, and sold back to hungry citizens.

In both these cases routine public policy promoting intentional death and cannibalism is offered as a convenient solution to intractable social problems. However, in the case of Lt. Governor Patrick’s “modest proposal,” the policy is nuanced and implied. But at the heart of it there is social policy that coldly advocates trading lives for proposed solutions to difficult social problems. Here is what he says:

“No one reached out to me and said, ‘As a senior citizen, are you willing to take a chance on your survival in exchange for keeping the America that all America loves for your children and grandchildren?’ [But...] If that is the exchange, I’m all in. .... You know, if I get sick, I'll go and try to get better, but if I don't, I don't, and I'm not trying to think in any kind of morbid way, Tucker. I'm just saying that we've got a choice here...”

However, unlike the first two examples, Lt. Governor Patrick’s proposed solution is neither satire nor a science fiction thriller. It is seriously proposed as real public policy to address a deadly pandemic and the consequent economic downturn. Moreover, it is a sentiment that has been echoed in some quarters across the nation and around the world. For that reason, as the pandemic explodes in severity months after the Lt. Governor’s talk, the concept deserves a closer look.

Lt. Governor Patrick’s interview with Fox News’ Tucker Carlson was on March 23, 2020, a time when forcibly closed businesses and full lockdowns at home were common in the United States and abroad. Economic activity was plunging, and unemployment was skyrocketing. To be sure, it was a scary time. It was generally believed that the biggest risk for serious complications and death was experienced mostly by older persons and persons with certain pre-existing conditions. Moreover, there was a substantial overlap of those two groups. Younger people were generally thought to have mild symptoms or none at all. Consequently, COVID-19 was often thought of as a disease that primarily affected older persons but barely affected everyone else.

At the time there was no vaccine or widely accepted effective medical interventions to fight the spread or medical consequences of the virus. Public health experts advocated social distancing and isolation as the most effective way to combat the spread of COVID-19. Across the nation businesses shut down and people stayed home. This in fact did blunt the spread of the virus, but it also resulted in massive unemployment, plunging markets, and idled businesses. Despite the fact that a deadly virus was clearly being contained, as the weeks went on there was growing political pressure to reopen the economy to employ workers and to allow businesses to operate once again.

An erroneous but pernicious logic began to emerge, to support those who wanted to rush forward and reopen the economy. The idea was that shutting down the economy was a very steep price to pay just to protect older persons. For most of the population COVID-19 was thought to have little if any medical consequences of note. Outside of public health circles it was commonly thought that COVID-19 was no worse than seasonal flu. The price paid by tens of millions of workers and their families, and tens of thousands of businesses, was thought by some to be too high just to protect older persons. “It’s too bad about the older folks,” the thinking went, “but we need to open up the economy.” That was the logic, and that is the background for what Lt. Governor Patrick advocated, however obliquely.

In order to promote his wacky dichotomy – economic growth or preserving the lives of older persons – Lt. Governor Patrick ignored the growing understanding at the time that COVID-19 affected the entire age spectrum. Older persons were more likely, but not exclusively, subject to serious illness or death. Moreover, just two days after his interview, the Senate passed the $2 trillion CARES Act designed to protect unemployed workers and troubled businesses. A day later it passed in the House and was signed into law by the President. The whole point of the CARES Act was to save lives and address the worst economic consequences of the response to the pandemic. Meanwhile, the Lt. Governor was advocating his extreme views because, as he told his interviewer, “...we are going to be in a total collapse, recession, depression, collapse in our society” if we did not adopt his draconian solution.

Looking beyond the current pandemic, the real issue is that, compared to most European countries, the United States has a fundamentally inadequate infrastructure to support unemployed workers even in the best of times. Most European workers receive unemployment compensation that is much closer to their actual wages, and receive it for a longer period of time. They receive more money and they spend it. And they have a national health care system that provides health care even to the unemployed. The economy as a whole benefits, and the ravages of the pandemic are blunted. They don’t have to sacrifice their babies or their grandparents. And neither do we.