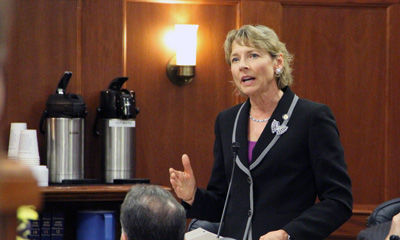 My maternal grandmother had an adage for stubborn people that went like this, “A hard head makes a soft ass.”

My grandmother’s wisdom was demonstrated on Tuesday when members of the Senate Majority lost their committee chairmanships and were removed from some other committees. When a person refuses to see the reality of a situation they eventually will be forced to see it by forces beyond their control. Despite what the far right of the Republican Party may say about the changes and the eventual demonization of the Senate leadership, the actions they took were justified and correct. When you have members of a caucus who take extreme positions and refuse to come to the table and compromise and work with their colleagues on the challenges the state faces then there must be certain measures taken. In order to understand why these actions were taken it is important to give some history as to what led the Senate leadership to the course they took last week. Beginning last year with the House in chaos and the Senate being the only branch of the legislature functional President Giessel took on the mantle of leadership for the entire legislature. It was a heavy load that she had to carry but she did it with grace and style and a strong will that has served her well in the leadership role she occupies. During that time a radicalized element of her caucus began a steady and consistent attack upon her and other members of her team that became vicious.

It culminated in an attempt by members of that faction to form a bipartisan coalition with the Senate Minority caucus, which failed as Senate Minority members were unwilling to participate in such a coalition. After that there was the fight over the special session location last summer when the Valley faction went to Wasilla to openly defy President Giessel and not participate in the constitutional session she had called.

After the special session fiasco that the Valley faction created they started going out over social media and on right wing radio shows attacking the Senate leadership team. When their colleagues expressed to them how unprofessional this was and that they needed to conduct themselves in a different manner the response was more viciousness toward their colleagues. What happened during the floor session was the end result of unprofessional behavior of the Valley faction and this was the leadership giving them a big slap on the butt with the intention that hopefully they will get their act together and start behaving.

The caucus as a whole is not moving to the left but is moving in a more sane and rational direction that is to the benefit of the people of the state. It must also be stated that the caucus rule which governs the majority caucus on all budget votes does not apply to just budget votes but also to all appropriation bills. Any protests by the Valley faction to the contrary is nonsense they are peddling to the public to get people to feel sorry for them. When the majority caucus votes on the budget they must speak with one voice and if there are members not in alignment with that voice then they should leave the caucus. Another point that needs to be made is that those majority members who were punished are not the more conservative members of the body. The Senate leadership and those who have been supporting them within the caucus are the more conservative members. In closing if the valley faction want to get better treatment from their colleagues then they need to come before the leadership and apologize for their past actions and abandon the extreme positions they have taken on the PFD and the budget. If they do not then it appears that President Giessel and Sen. Coghill will have to impose more disciplinary measures until they comply.