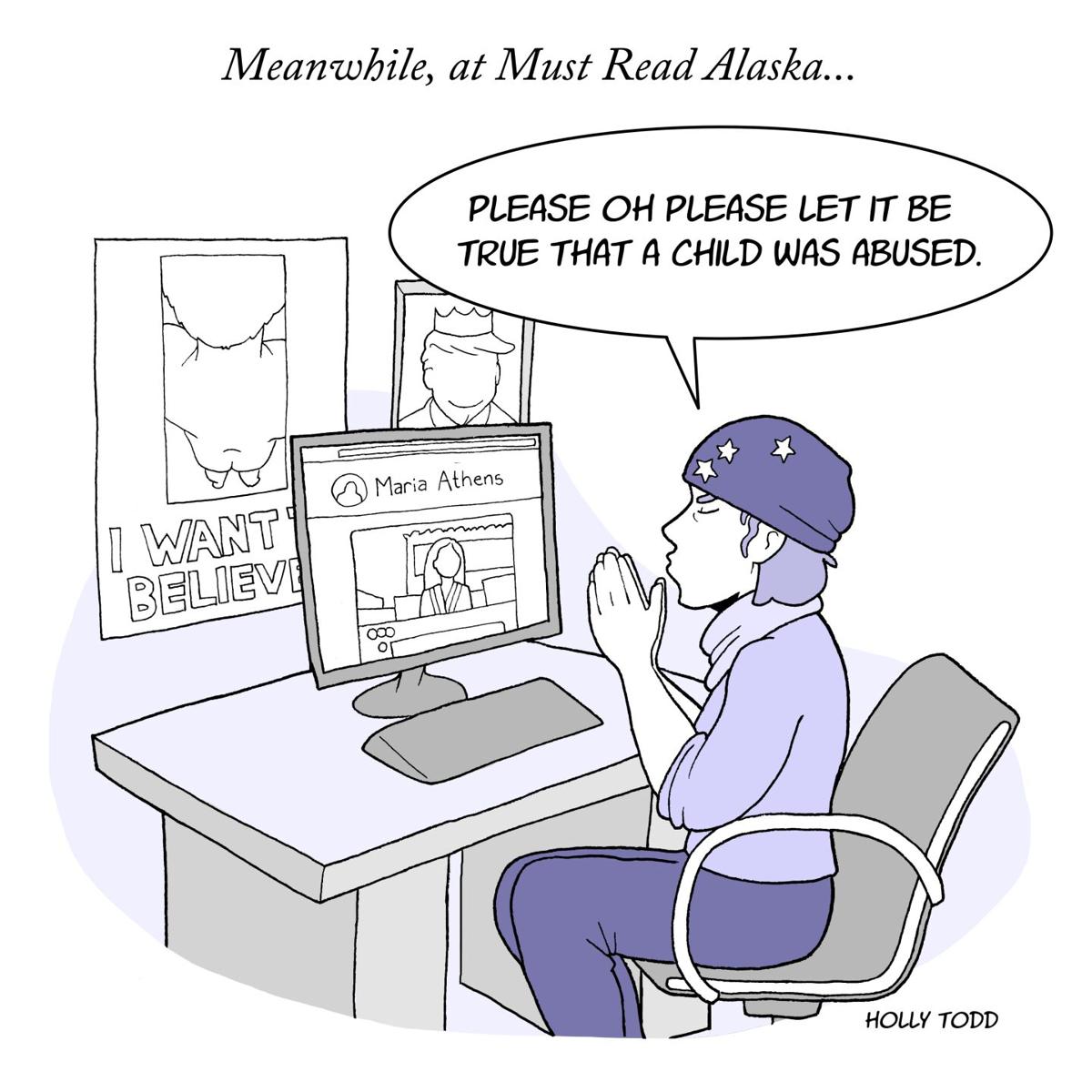 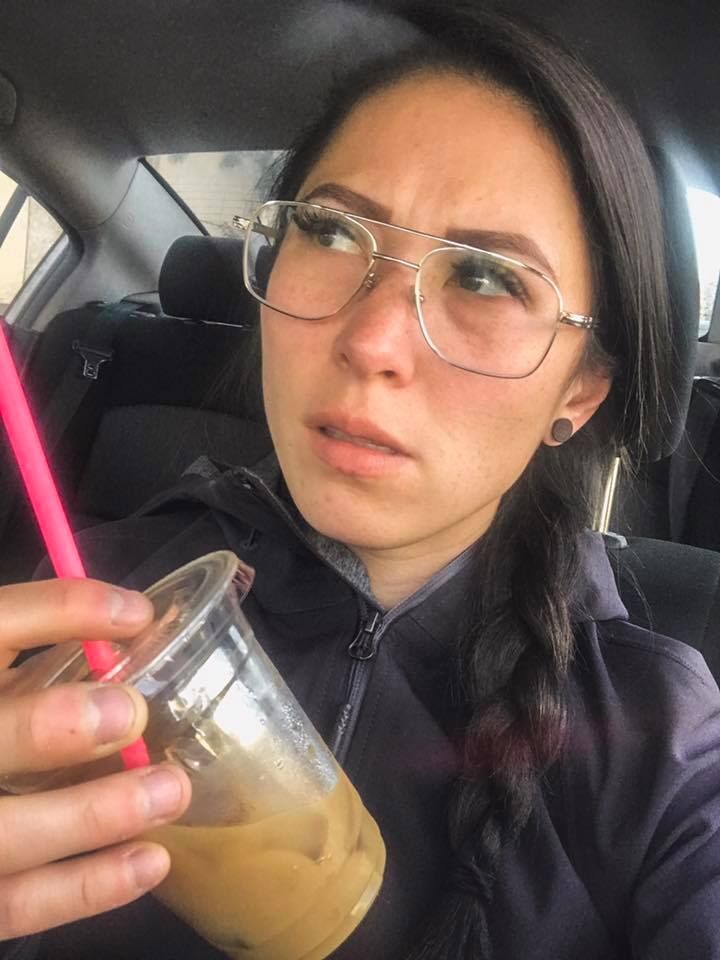 In what can only be described as the most ethically confusing political movement of 2020, Qanon has unwittingly and ever-anonymously made headlines this week across local news outlets.

Feeling like you missed something juicy? You didn’t. It was all over your news feed. I don’t think there’s a person in Alaska that didn’t hear about the recent scandal involving the sordid relationship between Mayor Berkowitz and journalist Maria Athens. What you may have missed however, is the connection to the far-right conspiracy theory that a satanist ring of “deep state” politicians, pop stars, and Hollywood executives are involved in a pedophelia ring that President Donald Trump will expose and free us all from during “the storm” in which Trump will execute a mass arrest of Democrats. Yes, it sounds crazy, but the thing about cults is that you don’t usually know you’re in one until it’s too late. Unfortunately, both Mr. Berkowitz and Ms. Athens have found themselves to be casualties of the Q-Anon conspiracy theory.

We can all agree that pedophiles and government cover-ups are bad, and that we absolutely want to save our children from predators. However, we might not be so keen to jump on a movement that is exploiting our best intentions to further an unbelievably specific political agenda.

At the very least, it’s unlikely that any of us want to take part in the destruction of an innocent person’s life because we have unwittingly found ourselves on a cancel culture/internet lynching, witch hunt.

Conspiracy theories are often difficult to identify because they’re founded in both truths and lies. They appeal to those seeking answers, justice, community, and acceptance. They play on our emotions and twist our best intentions to carry out the will of their creator. ‘Q’, the author or groups of authors responsible for the ongoing evolution of the theory, often release information or make predictions that only someone with “the highest level of security clearance” could possibly have. Every once in a while, they’re spot on. For example, when QAnon broke the news of Jeffrey Epstein’s death almost an hour before news sources. This legitimizes the theory in the eyes of the conspiracy believers and makes the entire conspiracy theory easier to buy into. Unfortunately, having access to information, even classified information, doesn’t make Donald Trump the savior of abused children, nor is it evidence that an elitist pedophile ring of rich and powerful Democrats is stealing children. Factually speaking, there is more evidence to support the argument that Donald Trump is part of an elitist pedophile ring.

QAnon conspiracy theory appeals to our hero complex and our parental instincts by identifying an immediate threat and directing our attention to very specific groups to keep a watchful eye on. Perhaps you’ve heard of pizzagate or #savethechildren? In case you were wondering why Facebook blocked the hashtag, it had nothing to do with the actual Save The Children Organization (which denied any involvement with the QAnon use of the hashtag) or the original poster, Helen Owens’ intent to spark a movement of action and stand up for the voiceless, and had everything to do with #savethechildren being used by an alt-right conspiracy theorist group to spread misinformation. It’s not a coincidence that a group constructed to spread misinformation would usurp a well intended trending topic. Trending hashtags are the fastest way to spread a message across multiple social media platforms. Once an hashtag is trending, any associated message can be attached and skewed to fit the narrative. A noble example of this would be when the gay community took over #proudboys last month.

Maybe you’re wondering who would benefit from targeting Democratic officials? Who speaks in notoriously fragmented English? Who has ‘the highest level of security clearance’? Whose political career relies heavily on the spread of misinformation? Who had a well publicized obsession with Hilary Clinton’s emails in 2017? Who has access to the president’s office? Who uses social media as their most effective means of campaigning? Who has multiple rape allegations from underage girls that would benefit from being viewed as the champion against pedophelia? Is it a coincidence that a disturbing percentage of Republican officials and politicians support QAnon theory? Is it odd that the President embraces the theory that has been deemed a domestic terrorism threat by the FBI?

Maybe understanding how this type of mainstream hysteria is used as a tool to generate hate for our fellow countrymen and push well intended people to do crazy things in the name of righteousness makes you reflect on wether or not you’re unknowingly contributing to something that is more complex than simply wanting children to be safe.

All that aside, witch hunts are never victimless. This one in particular has ruined five lives. Maria Athens found herself so deep down the conspiracy rabbit hole that she destroyed her career and earned a criminal record for doing what she believed was her part to bring down a corrupt Democratic official. Mr. and Mrs. Berkowitz have had private, family matters put on display for the public, not to mention a very unflattering nude. And let’s not write off the incident involving the soon-to-be former mayor as an unfortunate byproduct of a life lived in the public eye.

Consider that Ethan Berkowitz has two children that have already been victimized by those that disagree with their father’s professional decisions and are now being forced to endure not just the pain of their father’s personal transgressions, but also the public shame perpetuated by a population that is hell-bent on making one man’s personal life a testament to the work he has done as a politician. When we talk about wanting to #savethechildren it doesn’t mean we have to disregard the mental health of other children.

Whatever your beliefs are about the deep state and our Lord and Savior Donald Trump, don’t forget that the most important thing a parent can do to protect their children is to supervise them. There is nothing wrong with keeping a watchful eye out for predators but don’t spend so much of your time looking for rapist politicians and Hollywood execs that you neglect to talk to your kids about what is and isn’t appropriate behavior. Don’t forget to get to know the parents of their friends before they head off for a play date or sleep over, monitor their internet use, make sure they know they can talk to you if something happens to them. Don’t forget that the majority of children that become victims of abuse are abused by people that are close to the family.

Don’t spend so much time following online anonymous prophets, deciphering “breadcrumbs,” or unknowingly sharing memes intended to spread misinformation that you are distracted from putting in the real effort to protect your own children.