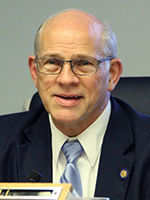 Senator John Coghill has been serving in the Alaska Legislature since the 1999-2000 session. He is currently the most senior Republican in the state Senate and is also part of the Senate Majority leadership team being the chairman of the Senate Rules Committee. Senator Coghill is a man who has deep roots in the state being that his late father Jack Coghill was a delegate to the state constitutional convention from 1955-1956. As such, he is someone with a deep understanding of the Alaska Constitution and probably more than most in the legislature, he values it a great deal. Another aspect to Senator Coghill’s time in public office has been his recent vilification by the far right of the Republican Party and their spokesman in the Senate. The attacks that have come upon him are a real shame because he is someone who has always been a solid conservative in the Senate. When he was first elected he pursued legislation attempting to place restrictions on abortion in the state which ended up passing the legislature but were overturned by the Alaska Supreme Court. After that he worked on legislation promoting resource development in the state and has consistently fought the environmentalist movement’s attempts to lock up Alaska. Throughout his career in the state House he was always the most conservative member on any issue that came up in the Capitol and never wavered on his convictions. Since moving to the Senate in 2010, he has become a villain for many in conservative activist circles because of his support for SB 91 and his refusal to support placing the traditional formula for the dividend in the state constitution. While I disagreed with his support for SB 91 and I do agree with his position on the dividend the attacks upon him have been over the top and by and large unfair. Just because Senator Coghill has taken positions that are not in alignment with the majority of conservative activists in the state does not make him a progressive. It simply means he has a disagreement with the activist community on a few issues and is going to handle those issues in the manner that he feels is best for the state.

The response to him should be one of disagreeing with him on certain issues and working with him on others. But that approach is by and large gone from American politics, and what has replaced it is a political tribalism that is slowly destroying our republican institutions and breeding an atmosphere of hate.

Within the Alaskan Republican Party there is a growing civil war between those who reject this tribalism and those who embrace it and want to destroy anyone not in alignment with them. Senator Coghill has chosen to not sink into the muck that is that tribalism and for that he should be applauded and given many thanks because by doing so he is defending some core Republican principles.

Next year will be a year that will make history in this state in many ways because Senator Coghill and others like him will be up for reelection next year. If Senator Coghill is defeated in the primary election then it will be a sign of which faction is winning the civil war within the Alaska Republican Party.

For the good of the state I hope Senator Coghill wins his primary along with some of his other colleagues who are up next year because if they don’t, then the state will be worse off. Because we will lose an approach that has made our legislature functional and it will be replaced with one that shall bring chaos to the building. For the future of Alaska let us hope that Senator Coghill stays where he is and the beacon of light that he has become in the Capitol does not burn out for the near future.