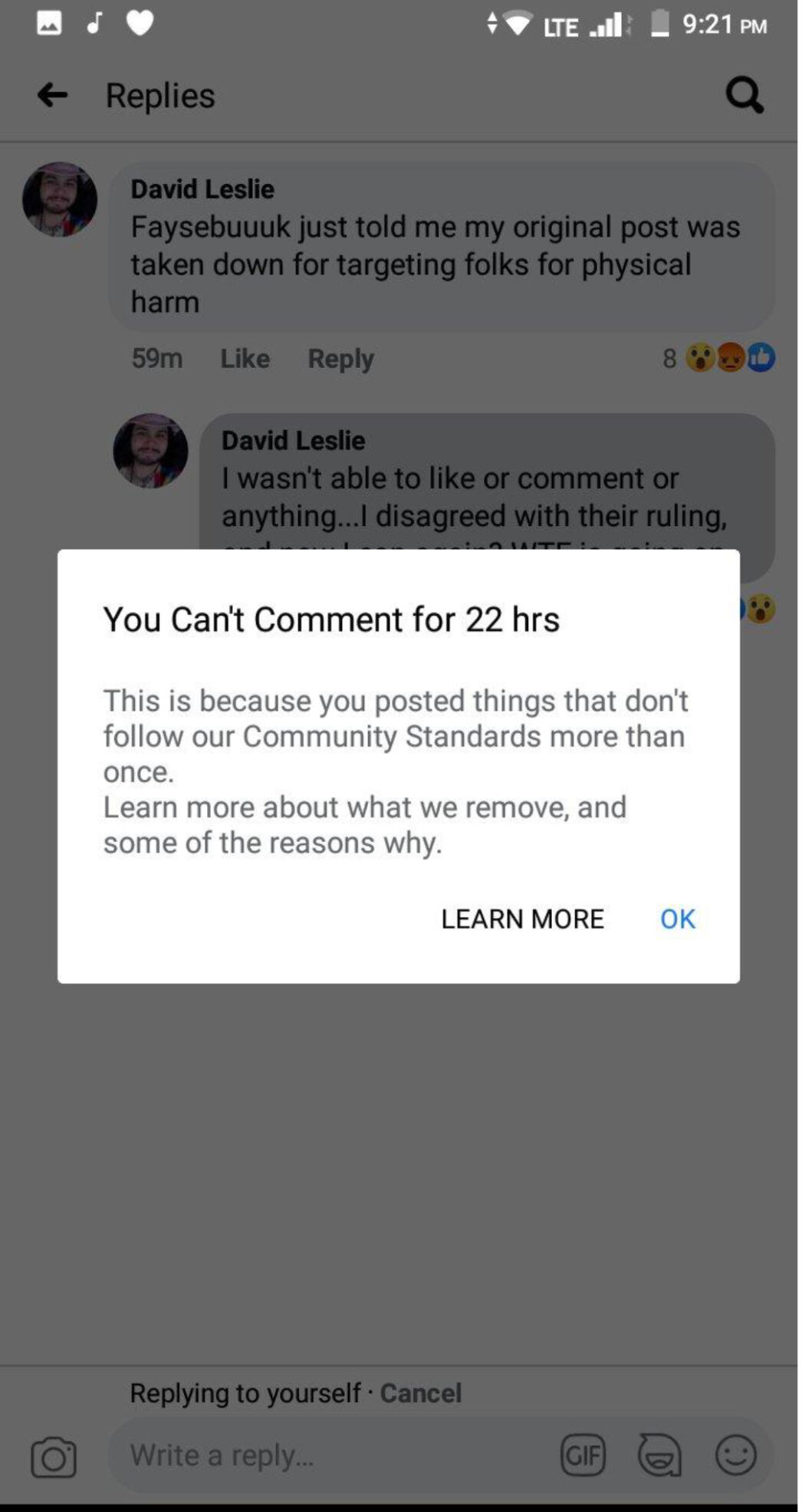 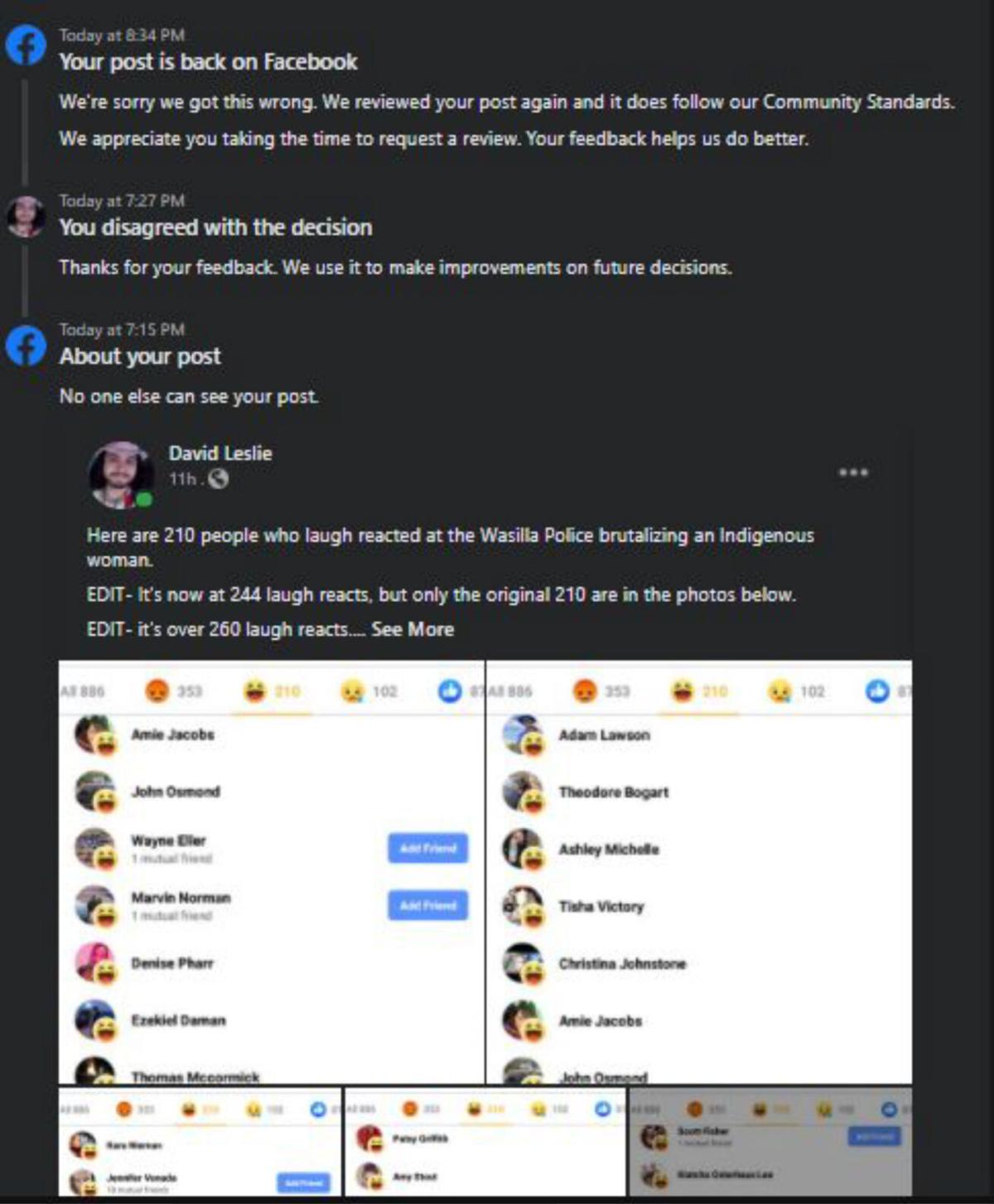 Late Sunday night, Feb. 7th, a friend of mine shared an image of the Wasilla Police Department engaging with an Indigenous woman at the Wasilla Walmart. One of the officers had his knee planted on the neck of this woman, similar to George Floyd, who died from suffocation under a Minneapolis police officer's knee, as he pleaded, “I can’t breathe,” which led to last spring’s Black Lives Matter protests all around the world.

A Facebook live stream video showed the two officers from the Wasilla Police Department holding an Alaska Native woman to the ground, at first with a knee on her neck. They then tied all four of her arms and legs together, behind her back, and carried her, face down, in a manner that could dislocate her shoulders. She pleaded with them to stop — as she said she was recently in a car accident — out of Walmart and into the police vehicle, without undoing her ties. They struggled to get her in, as her body bumped against the bottom of the police car. They did not untie her as they appeared to drive away.

The entire time, the Wasilla Police officers were not wearing masks, putting her, other shoppers and workers at Walmart, at risk from COVID-19.

The livestream, broadcast by a Wasilla resident, would be viewed 55,000 times as of this writing. Amongst that, there are currently 300 people who decided to use the laugh emoji reaction in response.

When I first saw the video, 210 people laugh-reacted at an Indigenous woman being brutalized by the Wasilla Police Department.

Not only is this racist and dehumanizing, it is a symptom of a larger, systemic problem in Alaska, particularly against Alaska Natives.

I did not want to see these hundreds of people go without accountability for their harmful, hateful and racist actions.

So, I used my phone to take screenshots of all those who laughed at this woman’s pain.

Since then, 277 people shared my post, publicly shaming those who laughed at this display of unnecessary violence. I had to make a second post, showing the 292 people who laugh-reacted to this video.

And it made people mad. Some told me I was a “liberal moron.” Others said because this woman was assumed to be drunk or on drugs, that she deserved that violence. Some even said there is nothing wrong with laughing at someone who broke the law, further dehumanizing a fellow Alaskan.

That’s when Facebook reacted, and told me that I was “targeting people for physical harm,” even though all I post proof of their laugh reacts. Facebook restricted my account for 24 hours, not allowing me to post, comment or like other comments or post… only to let me back, unrestricted, less than an hour later, after I chose to disagree with their ruling. Facebook acknowledged that they had made a mistake, and rescinded my restriction...only to serve me ANOTHER notice saying I was restricted...which was ALSO undone almost immediately, after showing me a 22-hour restriction notice.

I currently do not know if any of my posts were altered or deleted, but it seems that all my original posts are intact.

A friend of mine keeping up with the situation told me that my post was taken down, only to come back up about 20 minutes later, but with some comments missing. Which comments were gone, I am unaware of.

As of right now, I do not know if I will be restricted again, or if the alleged infractions will be held against me, now or in the future. Facebook gave me an initial 24-hour restriction, then told me they were wrong, gave me a 22-hour restriction, only to let me use the website as normal. I have no idea what’s going on, or if I’m cleared of any wrongdoing.

As of this writing, I’ve been banned from commenting on Facebook for the fourth time tonight. I do not know why I keep being allowed to comment, only to run into restrictions over and over.

In the last year, I have reported many comments and posts on Facebook — ones that were harmful towards people of color and members of the LGBT community — only to have Facebook say they did not go against the community guidelines, except for one comment I reported two weeks ago, which was anti-Semitic. The comments I reported that were anti-Black, anti-Indigenous or anti-LGBT have remained posted.

But when I show 292 people actively engaging in anti-Indigenous reactions, I become the target of Facebook’s restrictions.

Almost by nature, Facebook protects whiteness more than anything else. People of color constantly have to create alternative ways to talk about white people, using terms such as ‘people of whiteness’, using snowflake emojis, or spelling out white as \/\/hite, whyte or vvhite. If we do not use such code words, we might be reprimanded with 24 hour restrictions like I received, or worse.

How much longer must the Alaska Native community be the target of hate, not only on Facebook or online, but in our governmental institutions?

Just Monday, Governor Dunleavy finally announced an emergency declaration for the village of Tuluksak, that had gone over three weeks without drinking water because of a fire, while one third of the village contracted COVID-19.

If Alaska Natives can’t talk about police violence and can be left without water, then how many other forms of dehumanization must we be forced to endure, especially if we can not hold accountable those who allow this harm to happen, from our governor all the way down to social media posts?

David Leslie is a queer Inupiaq Inuit from Fairbanks, and studied Broadcast Journallism and Film at the University of Alaska Fairbanks.

Below are 292 people who laugh reacted at the video showing the Wasilla Police brutalizing an Indigenous woman.