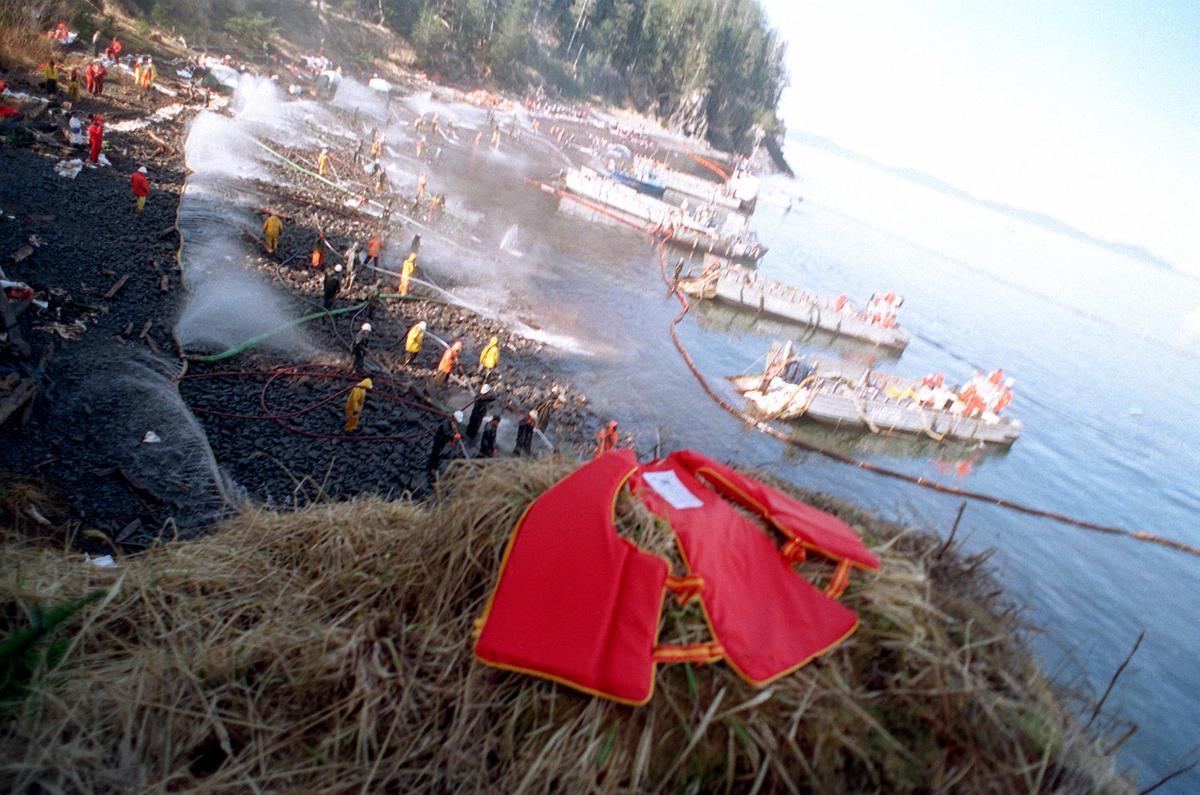 U.S. Navy Mechanized Landing Craft (LCMs) are anchored along the shoreline as Navy and civilian personnel position hoses during oil clean-up efforts on Smith island. The massive oil spill occurred when the commercial tanker Exxon Valdez ran aground while transiting the waters of Prince William Sound on March 24th. 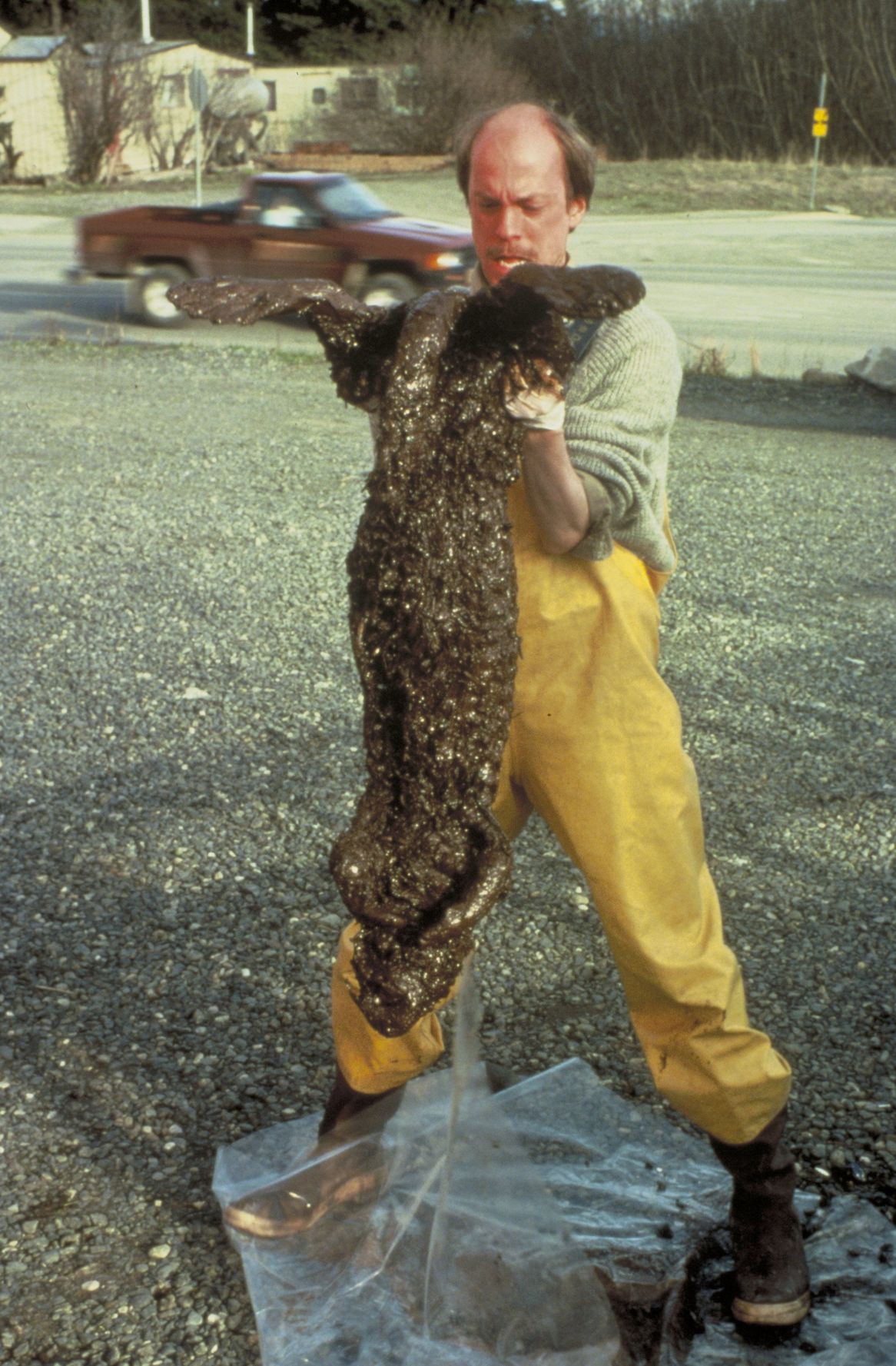 U.S. Navy Mechanized Landing Craft (LCMs) are anchored along the shoreline as Navy and civilian personnel position hoses during oil clean-up efforts on Smith island. The massive oil spill occurred when the commercial tanker Exxon Valdez ran aground while transiting the waters of Prince William Sound on March 24th.

Bad ideas in Alaska have a way of never dying.

It has just come to our attention that, again as in 2018, a private group convened by the Rasmuson Foundation is proposing that the entire remaining balance of Exxon Valdez Oil Spill ("EVOS") Restoration funds (approx. $188 million), obtained by the governments from Exxon through the 1991 oil spill consent decree, be transferred directly to the Alaska Community Foundation.

The “New Vision for EVOS” proposal, from a group of honorable, upstanding Alaskans calling itself the “EVOS Think Tank of Citizens," convened and funded by the Rasmuson Foundation, would turn all responsibility for the government Restoration process over to a politically conservative, non-governmental foundation that has absolutely no experience with environmental issues in general, oil spill Restoration in particular. The Alaska Community Foundation focuses on social issues, economic development, schools, the arts and humanities — not environmental issues. It simply cannot be trusted with an issue as important as the Exxon Valdez environmental Restoration.

The Rasmuson-sponsored proposal would allocate most of the remaining EVOS funds to the Alaska SeaLife Center in Seward, the Prince William Sounds Science Center in Cordova, the Chugach Heritage Foundation, the Alutiiq Museum in Kodiak and a research endowment. These may be laudable community development enterprises, but none of these would do anything to directly assist the environmental recovery of the impacted ecosystem, which must remain the singular focus of the Restoration process.

Many who have worked with the EVOS Restoration process for more than 30 years strongly object to this ill-conceived proposal to raid the remaining EVOS Restoration Fund to use mostly for projects having little to do with environmental recovery.

The Rasmuson-sponsored “New Vision” proposal would put an end to the court-ordered government EVOS restoration program when there is still a great deal of work left to do. More than 30 years after the 1989 grounding, many of the resources and resource services injured by the spill remain listed by the Trustee Council as not fully recovered. Some, such as marbled murrelets, pigeon guillemots, herring, and the AT1 orca pod, remain listed today as “Not Recovering.” Toxic Exxon Valdez oil remains in the beaches of Prince William Sound. And there are still many large-parcel habitat protection opportunities remaining before the Council that offer significant benefit to achievement of Restoration goals.

But the Rasmuson-sponsored proposal does not directly address these ongoing environmental injuries or restoration opportunities in any significant way. The proposal contains little detailed discussion of the goals and objectives of the long-established EVOS Restoration Plan, or measures needed to accomplish them. The proposal essentially throws in the towel on oil spill environmental recovery — a profound betrayal of the state’s “responsible development” mantra.

In response to our public disclosure of the proposal in the Anchorage Daily News (June 18), the Rasmuson-sponsored group claimed in its own opinion piece (June 20) that “the Trustee Council has embarked on plans to ‘spend down’ the entire remainder of the funds and dissolve the Trustee Council,” and that they were somehow trying to save the process.  But this is simply not so, as government Trustee officials themselves confirmed this week.  In fact, it could not legally be true, as the government Trustees have had no public process regarding the proposal. Significantly, Alaska Native Tribal governments in the spill region, which have a special government-to-government relationship with the federal government, have not been consulted.  Further, the oped did not disclose that the group was convened and funded by the Rasmuson Foundation, and that Rasmuson's CEO (the main author of the oped) is also the Treasurer of the community development foundation that would receive all of these funds.  In deference to the political and financial clout of the Rasmuson Foundation, the Anchorage Daily News declined to correct these significant errors and omissions.

Historically, with so much money available through the EVOS Restoration process, many organizations — agencies, universities, industries, communities — asked what’s in this for them, rather than how the funds could best serve full recovery of the injured environment. Ironically, this was the same singular, selfish focus that caused the oil spill in the first place, and the same mistaken priorities expressed in the “New Vision” proposal.

Fortunately, any such significant change to the $1.025 billion 1991 court settlement would need to be approved by the U.S. District Court. We are confident the court would agree with our concerns, and would overrule any such attempt to betray the original consent decree/court order. As well, such a proposal would need a broad, transparent public process, including consultation with Alaska Native tribes in the spill region.

While the governments have not always gotten it right with the EVOS restoration process, they do have the sole statutory authority to conduct environmental restoration — not a community development foundation.

If the existing state and federal administrations cannot remain true to the original intent of the consent decree and the overwhelming public sentiment guiding the Restoration process, then they should transfer all responsibility and remaining funds directly back to the jurisdiction of the U.S. District Court, and a court-appointed Special Master would then ensure the future integrity of the EVOS restoration program.

Finally, there is the issue of timing of the Rasmuson-sponsored proposal. We are now less than five months away from the November election, and seven months away from the likely inauguration of a new federal administration. We are also in the middle of the COVID-19 pandemic and economic recession, demanding the public’s full attention and focus. Such a significant public policy proposal cannot possibly receive the public review and consideration it deserves at this time.

And it would be highly inappropriate to even consider terminating the long-established, court-ordered government EVOS Restoration process, as proposed, until new federal trustees are appointed next year. Such a major transition at this point would rightly be seen by the public and the court as blatantly political.

Bottom line: the Rasmuson sponsored “New Vision for EVOS” proposal must be flatly rejected, and the state and federal spill Trustees must continue doing everything possible to assist in the recovery of the injured environment.

Rick Steiner is a retired professor with the University of Alaska, and was the university’s marine advisor for the Prince William Sound region stationed in Cordova from 1983-1996. He was a co-founder of the Prince William Sound Science Center and proposed the Exxon/government settlement in 1990. He advises the U.N. and foreign governments on oil spill prevention, response, damage assessment, and restoration.