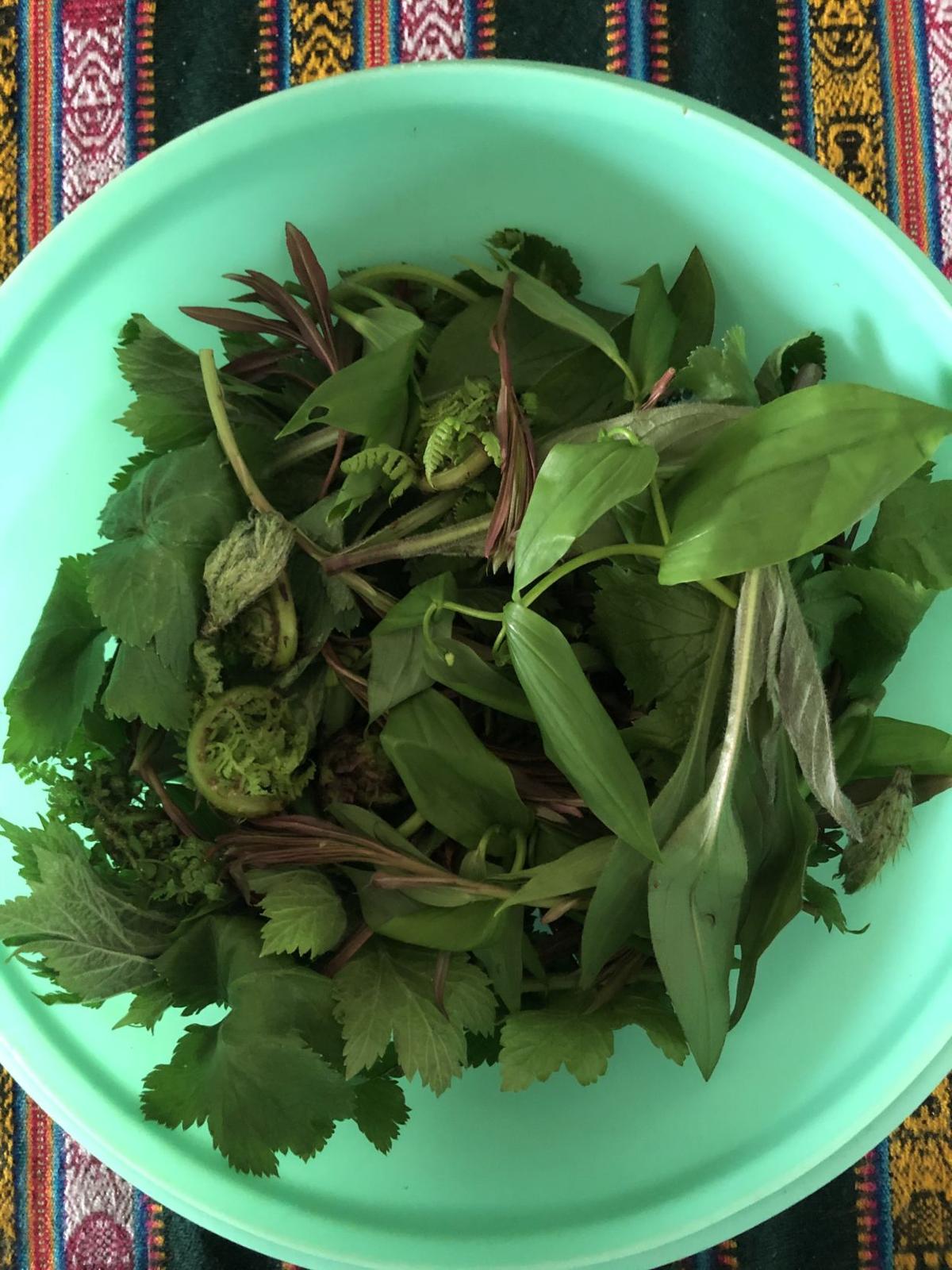 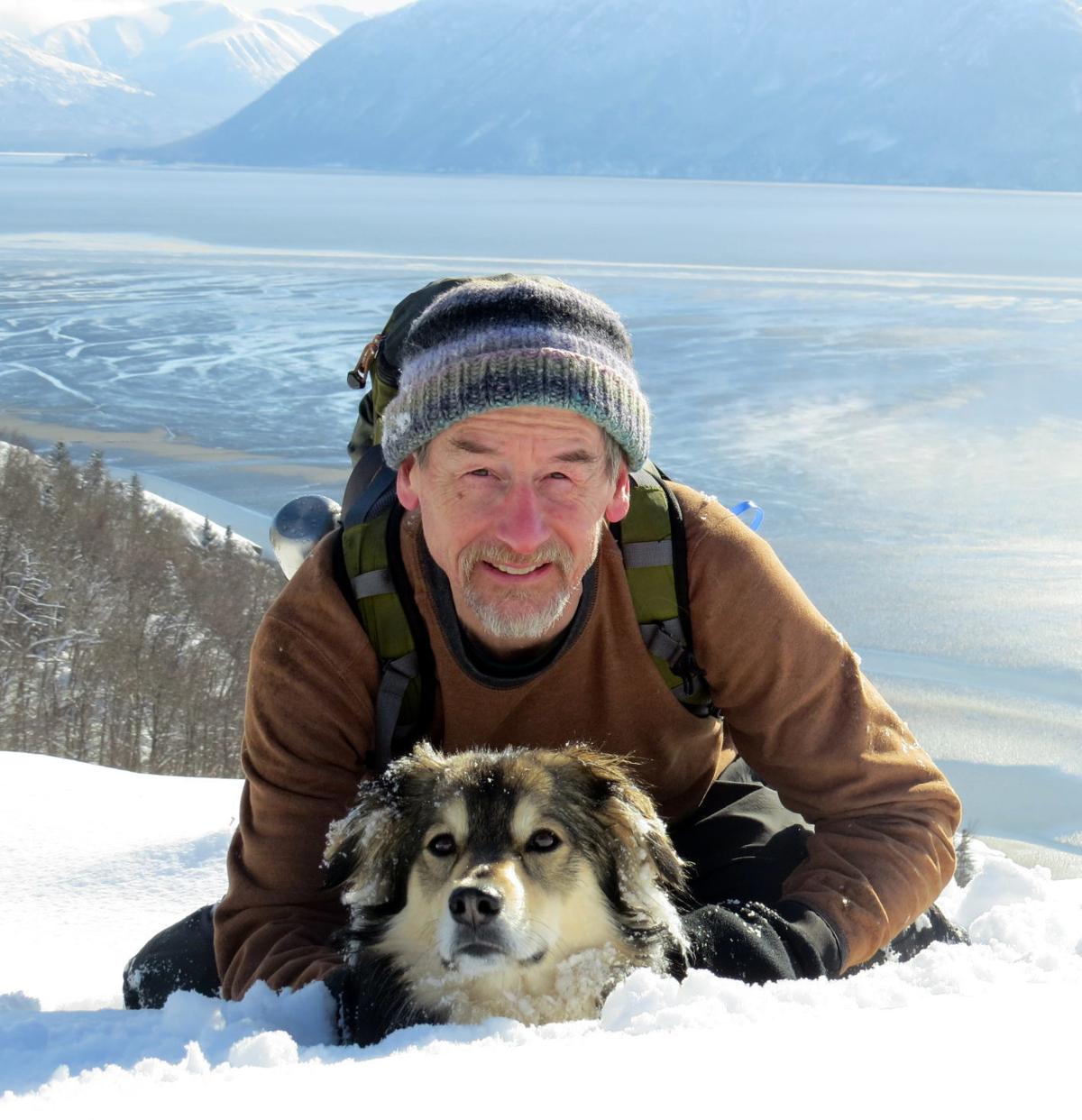 I can’t say for sure exactly how I came to discover the pleasures of eating wild greens, perhaps because it has been a gradual thing, without any single Ah-hah! moment when I suddenly realized the joys and benefits of doing so. Some memories do stand out, however.

The first memory is a general one, spread across many years: now and then I would notice people harvesting plants along Anchorage-area trails. Most, that I could tell, seemed to be older folks, with roots in Asia, the Pacific Islands, or Alaska’s Native community. Few, if any, appeared to be Euro-American “whites.” That is, people like me. I figured the plant collectors were following cultural traditions, but didn’t think much more about it, except to sometimes wonder what they were collecting.

Somewhere along my own life’s path, I learned that the fiddleheads of certain ferns could be eaten fresh in the forest. I tried a few, as something of a novelty, and agreed they were crunchily tasty. After that, I would sometimes nibble on a fiddlehead or two when hiking, but for a long time they didn’t become more than an occasional snack. (I’ll briefly note here that some edible-plant experts discourage any consumption of uncooked fiddleheads; among the reasons is that they reportedly can cause intestinal distress. As with all plants and other potential “wild edibles,” including and especially mushrooms, caution—and education—is advised when starting out, because some can be toxic to humans.)

Some years after being introduced to fiddleheads, a friend encouraged me to try the early shoots of tall fireweed, when they’re only a few inches high and their leaves are still reddish and haven’t yet fully opened. Now they’re among the plants I regularly nibble in early summer. This remains one of my more vivid wild-greens memories, because it occurred at McNeil River and I primarily knew the friend as one of the sanctuary’s knowledgeable bear guides. That she would introduce me to an edible plant during an outing devoted to bear viewing itself seemed notable. That the plant was one I’d never imagined something a human would eat was perhaps even more striking, making that small incident a clearly memorable one.

The final memory I’ll share is this: in 2017, girlfriend Jan Myers and I took a one-day tutorial of sorts with a local “plant person,” Jeanna Duryee, who harvests wild greens for both culinary and medicinal purposes.

First Jeanna led her four students on a foraging expedition in a patch of east Anchorage woods, demonstrating along the way the proper techniques for harvesting the tightly clenched “fists” of new emerging devil’s club leaves; and also freshly sprouting cow parsnip, 6 to 12 inches high and both stems and leaves still tender.

Then, in a kitchen, Jeanna demonstrated a variety of ways that wild greens can be turned (or incorporated) into servings of various kinds, from pastas to salads. We helped her clean and “blanch” the cow parsnip and devil’s club in slightly salted, boiling water, which is intended to soften the plants and temper their taste.

Eventually the cow parsnip became the centerpiece of a “Greek horta salad” of sorts, other ingredients including olive oil, lemon juice, and salt. She also combined some of the cooked cow parsnip leaves with slices of cheese, tomato and salami (I’ve forgotten what she called this, but like the other dishes, it was delicious.) The devil’s club went into a pasta, along with sliced tomatoes, and salted and roasted pine nuts.

Besides introducing Jan and me to two more unlikely (in our experience) wild, edible greens, Jeanna’s gift to us was in showing how easy it is to prepare a scrumptious meal with wild, native plants at the heart of the recipes.

Over the last three summers, Jan and I have made it a priority to prepare and savor at least a few meals consisting largely, or entirely, of wild, native foods. The main ingredients have been a mix of wild greens and morel mushrooms, which we’ve combined at various times with wild Alaska salmon and, once, venison from a deer harvested by Jan’s good friend, Anitra (who has also provided some of the salmon we’ve enjoyed).

Morels, as I’ve noted in past writings, have become central to my Alaska springtime experience, and the hunting and harvesting (and yes, eating) of them a valued ritual. That’s a saga in itself, with new chapters still to be written.

While seeking morels can occupy hours of my time on any given “expedition,” the harvesting of wild greens is faster and more straightforward, simply for the fact that they’re much easier to find.

These have become the primary greens I collect: fiddleheads, tall fireweed, cow parsnip, devil’s club, stinging nettles, bluebells (also known as chiming bells), and twisted stalk. Many people better know the latter as watermelon berry, for the juicy fruits they produce in late summer, but the plant’s leaves and stems can be eaten raw when still young and tender. Upon trying it, I discovered twisted stalk to be among the tastiest of local greens, with a hint of cucumber flavor, especially when fresh.

For all of these greens, it’s best to pick them when they’re newly or recently emerged, both for tenderness and taste. In the Anchorage area, that means during the month of May and in certain places (where they sprout later) early June. And though I like to nibble on some while hiking through the wilds, they’re generally best eaten after being cooked (cow parsnip and stinging nettles especially need cooking, I wouldn’t try them raw).

In our relationship, I’m the primary hunter-gatherer, Jan the cook. She’s definitely the more creative one, combining the cleaned, sautéed morels and greens with pastas and salmon and venison burgers, usually adding cheese and salt or some other spice or seasoning. When I occasionally eat “wild” on my own, I’m happy enough to sauté the wild greens and morels in olive oil and consume them that way, nothing else required.

To end, I’ll offer these thoughts (versions of which I’ve shared before and remain as true as ever): As much as I enjoy the meals, I take equal pleasure, if not more, in the hunt for local foods and the harvesting of them, and in the time spent in their good company, the richness they bring to my life. And I make sure that I give thanks for whatever wild edibles I find and pick, for their nourishment of both body and spirit.