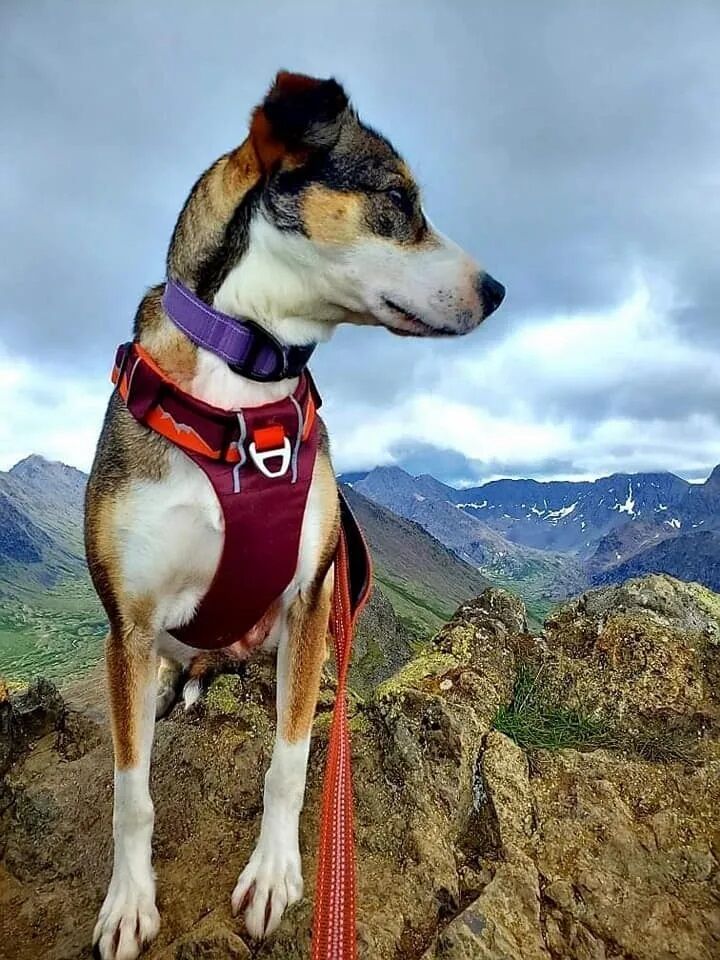 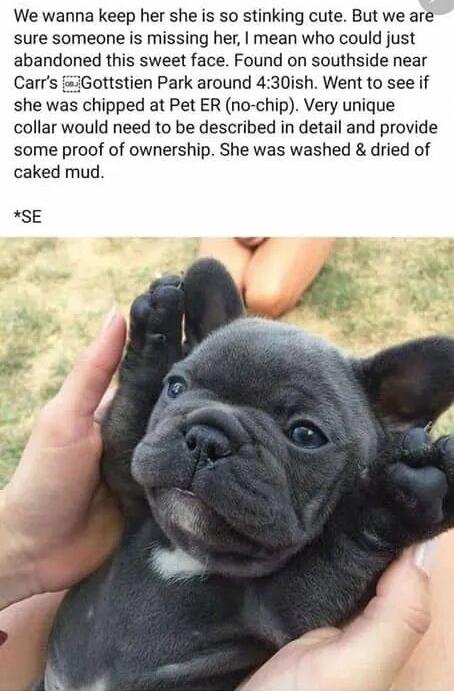 Pet scams are alive and well in Anchorage. 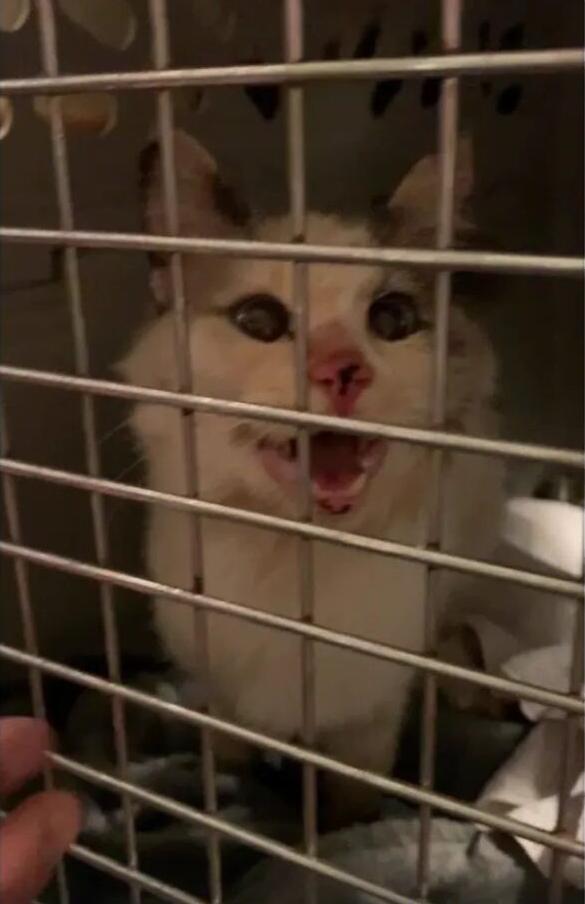 A cat reportedly rescued from an abandoned lot in Anchorage.

After, excuse the pun, 'pawing' through social media the past week reading some of the vile and hateful stuff circulating regarding the upcoming presidential election and the crime in Anchorage, I came away feeling exhausted, a little sad and icky feeling. I began exploring various videos and pictures on Facebook and came across one local group who sets out every day to do some good.

The Facebook group Anchorage Pets Lost & Found was created in May 2017 and boasts over ten thousand members. The purpose of the group is to reunite lost pets with their owners. They do an exceptional job, as evidenced by being listed on Anchorage Animal Care and Control's website as a lost pet resource.

The group has an experienced set of individuals armed with email addresses, websites, phone apps, ready to be pasted tips, and even more people who report sightings and leads. Some physically go looking for lost pets, making and hanging posters in clinics and shelters and providing encouragement and support.

They're quite literally a round-the-clock operation and hardly a, "keyboard warriors" only group. They are active, vocal and mostly kind-hearted people looking to help their community in a meaningful way. Whether you've lost a pet or not, you can learn a lot from this passionate and dedicated group of people.

In many cases, as I've learned from the group, cats typically do not stray very far from their home and often, leaving food and their litter-box outside will draw them home.

Dogs, however, can be more complicated as many are runners and explorers who follow their noses leading them at times, miles from their homes and owners. Some group members are dog-walkers and specifically walk dogs in areas of the city that have an active reported missing animal. How's that for dedication?

These group members don't charge to help either. There's no fee or expectation of payment. They do what they do out of their love for animals and in this day and age, what could be more pure?

What does this team deal with on a regular basis? As an example, many well-intentioned people adopt retired sled dogs only to find out that when they take off, they really take off just like a dog named Rain who within the past twenty-four hours was reported missing from the Muldoon and Tudor area of Anchorage to the group.

Within hours of posting that Rain had gone missing, some reported seeing "a dog that looked like it was hauling its ass straight down Tudor heading towards Boniface dragging a leash."

Group members also began offering tips and strategies in the hope of bringing Rain home, with one person posting a BOLO on the Nextdoor app. Signs were being made and word was spreading across social media to be on the lookout.

Rain has been found and has been reunited with her family and even though she was naughty, is still deserving of treats.

Cats and dogs are not the only pets reported missing and found, however, as turtles, bearded dragons and birds of all varieties are shared more often than you might think.

Not all missing cases have happy endings, however, although the vast majority of them do.

Sadly, some pets are found on the roadside  and picked up by people who take them to Anchorage Animal Care and Control where the staff checks the deceased for a microchip which would allow them to notify the owner. They also photograph them in case someone comes looking for their missing pet. Some pets are never heard from again, although an occasional sighting may pop up from time to time, giving an owner some ray of hope they might one day be reunited with their missing loved one.

Some missing pets are scooped up by individuals who never look for their rightful owners and keep them for themselves, while some pets succumb to predators and the weather our state is known for. Some pets simply vanish all together.

Scammers also occasionally show up in the group, posting pictures of animals charging "recovery fees." Pay the fee, and you will get your loved one back, except that you won't because the picture being used is one found on google and associated with a Nigerian scam like the one recently posted to Anchorage Pets Lost and Found, of a Frenchie bulldog whose picture was taken from Pinterest.

Often in these scam cases, someone who isn't even missing a pet may want to try and claim ownership of the animal. The scammer then gets them to pay their phony "recovery fee," and no animal is produced. In these specific cases where someone is trying to obtain an animal they don't own, I think it's safe to say you get what you deserve.

These scams, however, are almost always pointed out by the more seasoned group members who call them out within moments of being posted to the group.

In other acts of kindness, group members will stumble across an animal that is cold, hungry, and which has been obviously lost for a long period of time, as is the case with Kelsea Wollmann, who recently saw a post about a cat living on an abandoned lot.

Instinctively, she went to the abandoned lot and now has what she describes as a "super loving" cat in an animal crate eating copious amounts of food. She intends to take the cat to Anchorage Animal Care and Control to have the cat scanned for a microchip in the hopes of finding the owners. Kelsea does say, however, that while finding the owners is the goal that she "wouldn’t be upset if I could keep her."

Still, even with all of the kindness this group has to offer, there are larger issues at play in Anchorage. The number of stray animals on the streets is one of them.

While I've been unable to find official numbers of how many stray animals Anchorage has, a cursory look around social media indicates the number is higher than the capacity of animal shelters and rescues. People regularly post pictures of animals living under porches, abandoned lots and bushes seemingly everywhere in the city. Spaying and neutering your animals can help keep animal populations down, didn't we all learn that from Bob Barker?

The members of Anchorage Pets Lost & Found know all too well that you can't help all of the strays no matter how much one cares and it can be heartbreaking.

One of the largest obstacles to reuniting a pet with their family is the lack of microchipping, a simple low cost way of helping to ensure that if your pet is found, it can be reunited with you.

The microchip is a small, electronic chip enclosed in a glass cylinder that is about the same size as a grain of rice injected just under the skin of the animal. If a lost animal is found, a hand scanner is used to scan the animal for the microchip which contains at the minimum the owners telephone number. The cost of the microchip will run you about ten dollars, an expense that will pay for itself if your pet ever goes missing.

Recent statistics say that 1 in 3 pets will get lost during their lifetime, ten million pets will get lost every year and without current identification, 90% of lost pets will never return home. A ten dollar microchip can give you some peace of mind and help ensure the safe return of Fluffy or Fido.

If you're in Anchorage and ever have your furry, feathered or scaled family member go missing, don't panic. Remember that one of your first stops should be the Anchorage Pets Lost & Found Facebook group, where you'll be immediately greeted with hope, tips, encouragement and empathy from people who really do care about what you're going through as many of them have experienced the same panic and loss.

If anyone can help you find your loved one, the people in this group sure can, and remember, a microchip will make their volunteerism a lot easier.

Originally appeared on The Blue Alaskan. Reprinted with permission.