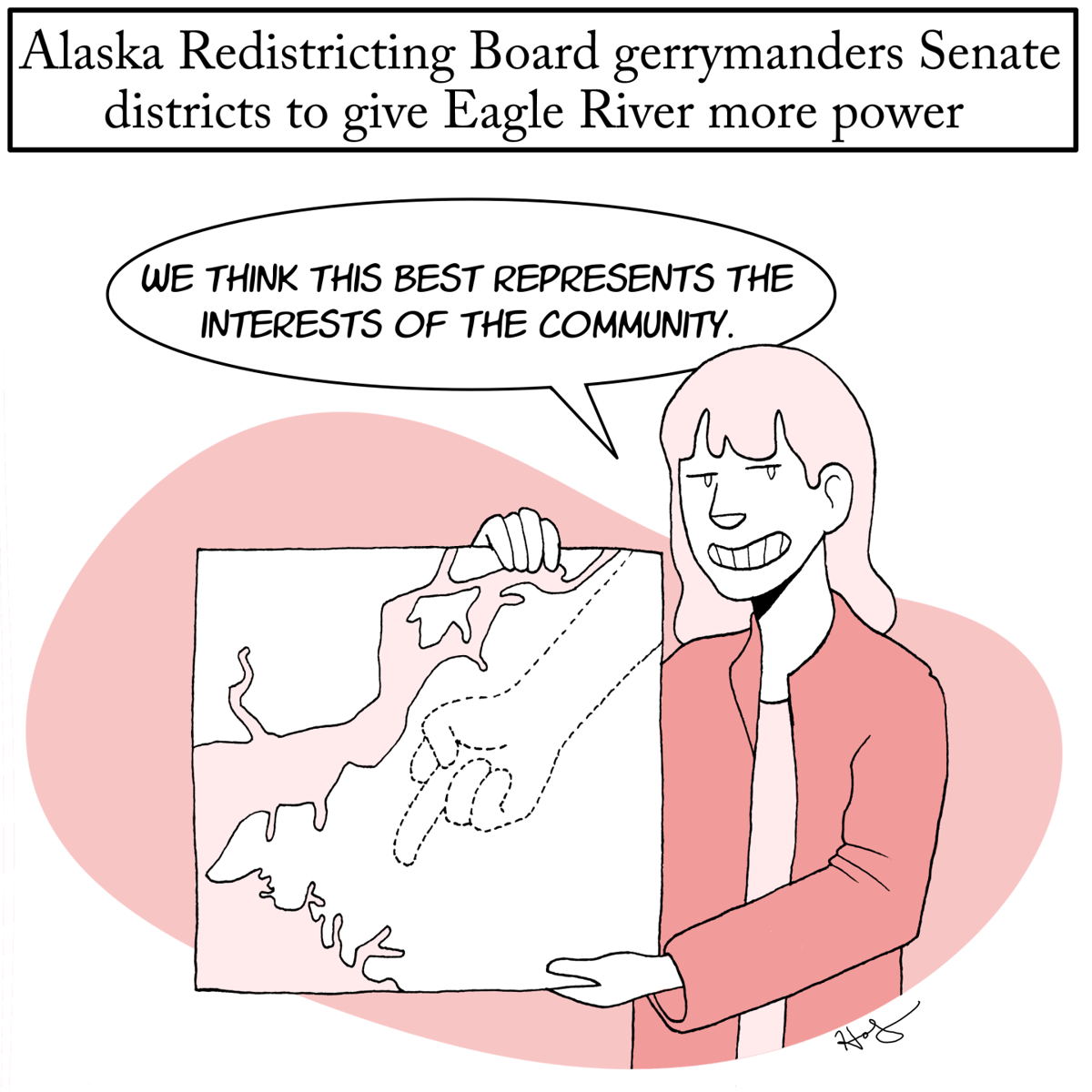 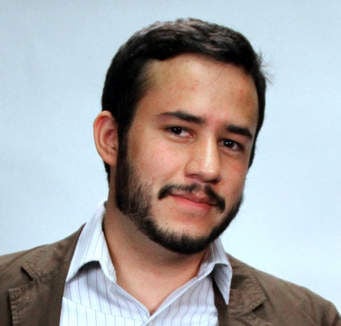 Not content to rest on their success, the conservative trio returned in the afternoon to push through their preferred ordering of Senate districts—determining who gets to run in presidential years and who runs in off years—after rejecting a proposal from member Bahnke to make the decision with a coin flip. Bahnke said she was concerned about the appearance of partisanship and worried that Marcum had access to information she didn’t have. Binkley dismissed her concerns and pushed forward with the vote. The board is adjourned for the day and is set to return tomorrow.

The Alaska Redistricting Board spent three hours in executive session to explore the potential legal and constitutional issues with a conservative member’s plan to split Eagle River into two Senate districts—a plan that relies on pairing JBER with one Eagle River district and the South Muldoon district with the other—only to come back and approve the plan without any explanation or justification.

With the board’s self-imposed deadline to finalize the election maps that will define the next decade of politics in the state Legislature, it was a moment that put the partisan intentions of the board on full display. Just the day earlier, the lead architect of the ploy had admitted it would boost the conservative community’s representation in the Legislature.

“This actually gives Eagle River the opportunity to have more representation,” said drafter Bethany Marcum, the CEO of the conservative Alaska Policy Forum who was appointed by Gov. Mike Dunleavy, during Monday’s hearing. “They’re certainly not going to be disenfranchised by this process.” The Anchorage-area pairings for Senate districts as drawn by member Marcum and approved on a 3-2 vote over concerns that it would diminish the ability of the Muldoon-area’s minority voters to be represented in the Legislature.

Concerns raised by board members Nicole Borromeo, appointed by former House Speaker Bryce Edgmon, and Melanie Bahnke, appointed by former Supreme Court Justice Joel Bolger, that the pairing of the largely white Eagle River would effectively “muffle” the voices of the minority voters in the South Muldoon district went ignored. Also ignored was the public testimony that was almost universally in favor of keeping Eagle River and Muldoon in their own, separate districts. And there was similarly no mention as to why the South Anchorage district was the one to be paired with Eagle River over the North Muldoon district, a pairing that would require the Senate district to span the mostly unpopulated area of the Chugach Mountains.

Instead, the board hurried to a vote without any discussion on the plan or the preceding three hours of legal input.

It was so rushed that it seemed to catch both Borromeo and Bahnke by surprise. As the board attempted to hurry along with its next item on the agenda, Borromeo asked for a new vote.

“I believe it opens the board up to an unfortunate and very easily winnable argument about partisan gerrymandering,” Borromeo said, referencing Marcum’s own words about the political outcome of the decision. “I don’t believe that any of the arguments that she put on the record, and more importantly the sound—SOUND—legal advice that we got from counsel in executive session, supports this pairing. It defies logic that we would do minority reach-in to South Muldoon and pair it with a very white district 8 miles away on the highway that crosses one mountain range and expect the courts to believe with any satisfaction that we have satisfied the public trust in the process.” A zoom in of the pairings with annotations from this post’s author.

“We have received mounds and mounds of public testimony (opposing this pairing) compared to a handful—including Marcum’s personal experience—that Eagle River is very integrated into South Muldoon,” Borromeo said. “The natural pairing, if she wanted to do Muldoon, would be North Muldoon but she couldn’t get to North Muldoon so she took South Muldoon.”

Board chair John Binkley—who had argued that the legal review was never needed and had tried to sneak through the plan last night based on the “feeling” that there was majority support for it—met Borromeo’s impassioned criticism of the plan with a warning.

“I am being careful and you know what? She should have been careful when she exposed this board to liability,” Borromeo fired back as Binkley moved to interrupt her once more. “JOHN. Stop it, let me finish. You have opened us up to a ton of legal liability and I want that vote reconsidered because it is a partisan gerrymander.”

That was all that Binkley could stand to hear.

He asked the members to cut off debate, a motion that Marcum readily made with a second from Simpson. The conservative trio voted to cut off debate—barring Borromeo from finishing and Bahnke from speaking at all—and then proceeded to kill the motion to reopen the vote on the pairings.

Bahnke, who said she also wanted to speak about the issue, was only permitted to speak after the conservatives successfully cemented their plan. When she was finally allowed by Binkley to speak, she said she was completely surprised by the series of events.

Board chair John Binkley, after forcing through Senate pairings that ignored public testimony and legal advice, listens to member Melanie Bahnke as she excoriates the board for its actions during the board’s hearing on Nov. 9, 2021. “I will say that there are times when you just have to say the emperor has no clothes and I think today is one of those days.”

“I thought we had achieved consensus—I will accept the outcome, for now—I had offered an alternative to the map that was just adopted for the Senate pairings that would kept Eagle River in tact, kept Muldoon in tact, eliminated questions around the dilutions of minority voters ability to elect somebody into office,” she said. “I will say that there are times when you just have to say the emperor has no clothes and I think today is one of those days, and while not necessarily silencing completely the voters in Muldoon—one of the lowest income, most racially diverse parts of our community and our state—this muffles their voices. … What happened here came as a complete surprise, and I don’t appreciate that.”

Binkley offered Marcum and Simpson an opportunity to make a statement. None did.

Marcum’s map was significantly different than the one that she had presented the day before. It abandoned what had been a consensus to pair together two Anchorage Hillside districts into one Senate pairing, and instead split that district into two districts. There was zero mention of this abrupt change in course by the board that, according to a breakdown from a third-party, would swing Senate leanings in favor of Republicans for the Anchorage area.

It’s an ugly turn for the Alaska Redistricting Board.

Though the process is inherently political by way of the appointments and was always going to benefit Republicans by way of the shifts in the U.S. Census, it had not quite reached such nakedly partisan levels. Where East Anchorage’s diverse communities had stood to have their very own senator, the plan now splits that Senate seat between Eagle River and Anchorage’s U-Med district. It means that South Muldoon will, for now, be represented by extreme right Republican Sen. Lora Reinbold.

Setting aside even those concerns for a moment, the process of rushing things through without justification or discussion is unacceptable and a particularly underhanded maneuver by Binkley that suppressed debate and ultimately undermines the entirety of the board’s work. The public deserves to hear the full justification and reasoning behind every action that will shape their representation for the next decade. Anything less rightfully invites skepticism and claims of partisan gerrymandering.

The fact that none of the conservatives were willing to explain or justify their action ought to be particularly telling.

In the big scheme of things, this entire thing is rushing headlong into a lawsuit over the layout of East Anchorage. The dilution of East Anchorage’s minority voters—South Muldoon, for example, is nearly 50% minority—will be one of the key issues here.

I covered the last round of lawsuits over redistricting. It’s hard to say how it will play out, but it’s safe to say that every underhanded action, every aside to political bosses and every effort will be picked through.