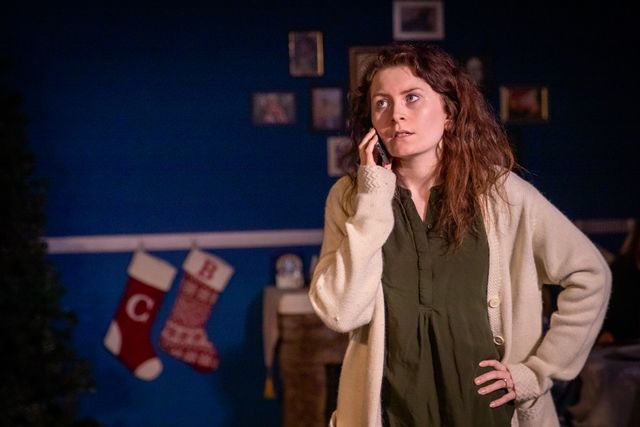 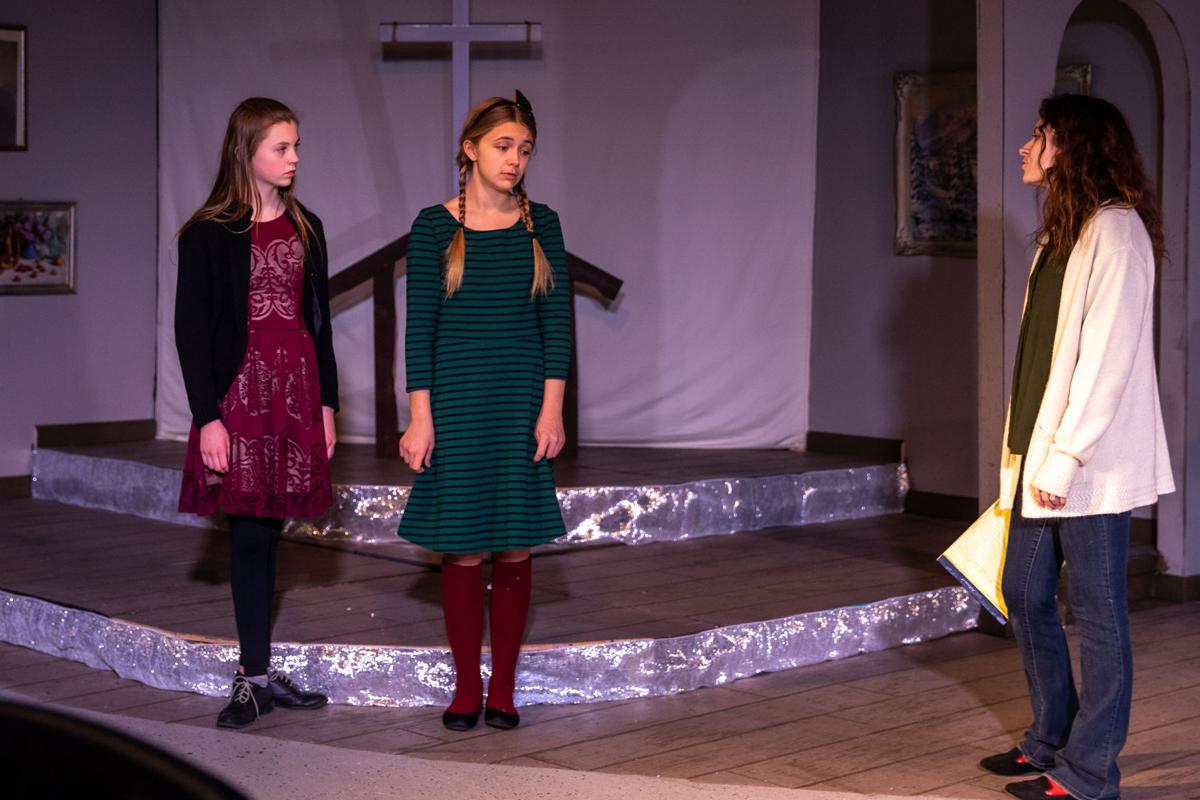 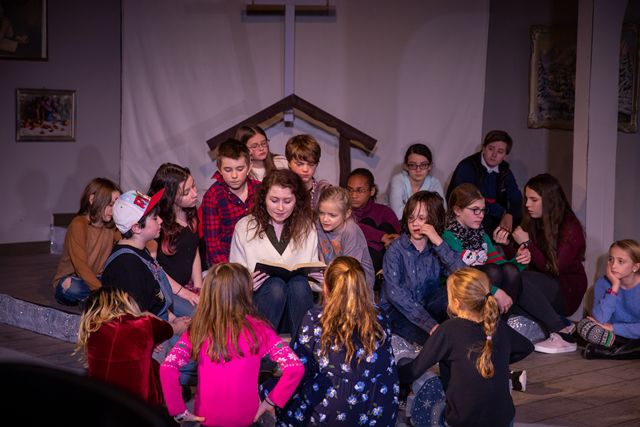 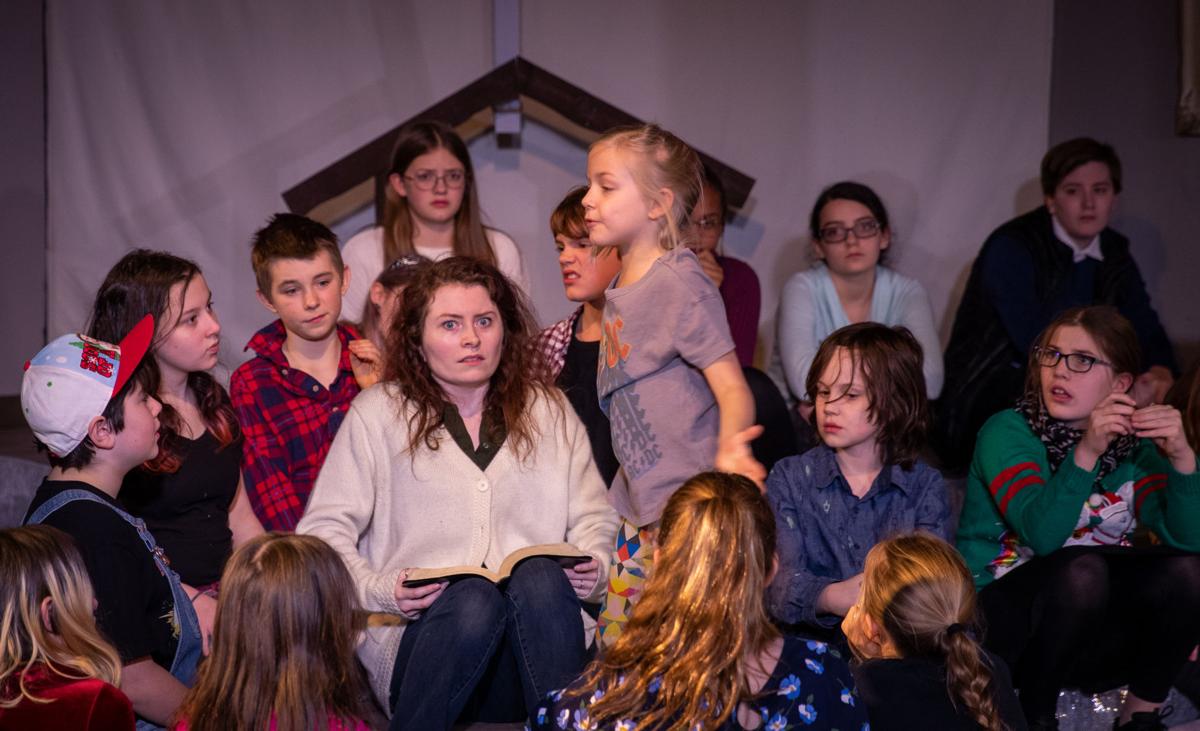 With The Best Christmas Pageant Ever, Anchorage Community Theatre set out to make a show where Anchorage could feel at home. First thing through the door, the audience is treated to a decadent catered spread taking up the entire lobby, so much to be shared there is hardly room for it all. The producer/director, Matt Fernandez, took the stage for an informal discussion with the audience. The back and forth felt slightly awkward and at a Jimmy Stewart impression I scribbled something about saving the theater for the actors, but I hadn’t quite gotten with it yet.

We have a few quiet moments with the set. There is a cozy home on one side of the stage with a dining table and fireplace with Christmas stockings and family photos on the wall. With a haphazardly decorated Christmas tree, gifts, and a piano, the set transitions into the main playing area where the show within a show is “rehearsed.” On the wall above the piano and in far corners are holiday drawings made by children. The set is completed with a rudimentary church where the children can gather around a minimalist manger. All this is bathed in a comforting blue light (design by Dean Bradley) as the action begins.

A few kids enter, listing the crimes of the town’s dreaded Herdmans, six children who chronically ruin everything with bullying, thievery, smoking, and a complete disregard for decency. Their history includes setting fire to a tool shed, stealing the firemen’s doughnuts at a benefit, and painting an obscenity in florescent paint on the shell of a neighbor’s prize turtle. Most of this is laid out for us by Beth Bradley (Drew Congdon) and Alice Wendleken (Zion Merrill). When an especially young actor faltered, she received a subtle prompt and finished speaking her line. The youth actors were on point.

We are introduced to the protagonist’s family when Charlie Bradley, played by Mason Dolphin, enters the Bradleys’ kitchen saying a prayer against the Herdmans, one all the kids use. Grace and Bob Bradley join the stage, played by Devin Merilatt and Tony Barnard, and in the following discussion the audience learns the same Christmas pageant is put on every year. This year, however, the woman who directs has been injured.

While this information is presented, I’m scribbling plot points and realize I may be the only person in the building who doesn’t know this all by heart. My mom read it to me like thirty years ago and I felt silly being blindsided by the plot, about a woman unexpectedly left in charge of telling her community the story of the birth of Christ.

“Haven’t you heard the Christmas story from the Bible?” one child exclaims during a rehearsal. In the course of three rehearsal scenes the community learns the differences of the Herdmans and their struggle. In discussing a manger for Jesus, it is revealed a makeshift bed had been made for the youngest Herdman. Hearing of the squalor of Christ’s birth, one of the Herdman children asks, “Where was child welfare?” and another says, “Child welfare is at our house every five minutes.”

After a rehearsal scene, Bob Bradley explains to Charlie the Herdmans are like Mary and Joseph had been, “tired, cold, and probably a little messy,” drawing the parallel to the disadvantaged.

Rehearsals are punctuated with the Herdmans revealing a lot of awkward truth the prim community seems ill-equipped to discuss. While Grace Bradley reads over the story she comes to the words, “Great with child.” Ralph Herdman (Ben Heinrich) immediately translates, “She was pregnant!” One schoolchild remarks how it is impolite to talk about Mary being pregnant, but this is the true purpose the Herdmans serve: to take a delicate allegorical story and have it simplified in real terms.

This brings chaos. When the Herdmans hear King Herod wants to kill Jesus they stir up a riot, inciting other children to go on the offensive. The Herdman girl playing Mary lights a cigar in the bathroom and when someone smells smoke the scene devolves to complete mayhem. Lights cut by about half and everyone goes slow-motion as firefighters, played by MaryAlice Lovel Larmi, Cena Moody, and Stefan Morin take the stage. The children mob Morin and take him to the floor. Lovel Larmi hits the ground upstage with the Christmas tree and a child. A red moving light mimics a spotlight, roving the scene as children are rescued from the stage, Cena Moody hauling one by the waist as she ushers another ahead of her.

After the disastrous rehearsal, Grace Bradley is encouraged to cancel the performance but she is determined. When the youngest Herdman, Gladys (Rose Merrill), who has interjected superhero narration into every rehearsal delivers the line, “Unto us all, a child is born,” the audience knows the pageant is going to be a success, though a unique one. As the pageant carries on with its mischievous peculiarities, our attention falls on Imogene, the oldest Herdman girl, who is playing Mary in the pageant.

That is what is truly impressive about this production, because a kid can have talent but it is meaningless without people to wrangle them. When the choir first took the stage for rehearsal, I realized I hadn’t heard a sound from the dozen of them backstage. That’s when Gladys darts around screaming comic book vengeance; her craziness is nuanced, on cue, and fitting with the action around her. And then they sing. I saw a guy doing the same thing I was, looking around the audience for dry eyes.

They were getting to me a little, too.

Maybe my heart grew three sizes or something because I rethought Matt Fernandez’s opening speech. He wanted to create a show where Anchorage could celebrate Christmas, celebrate our own community.

He did that well.