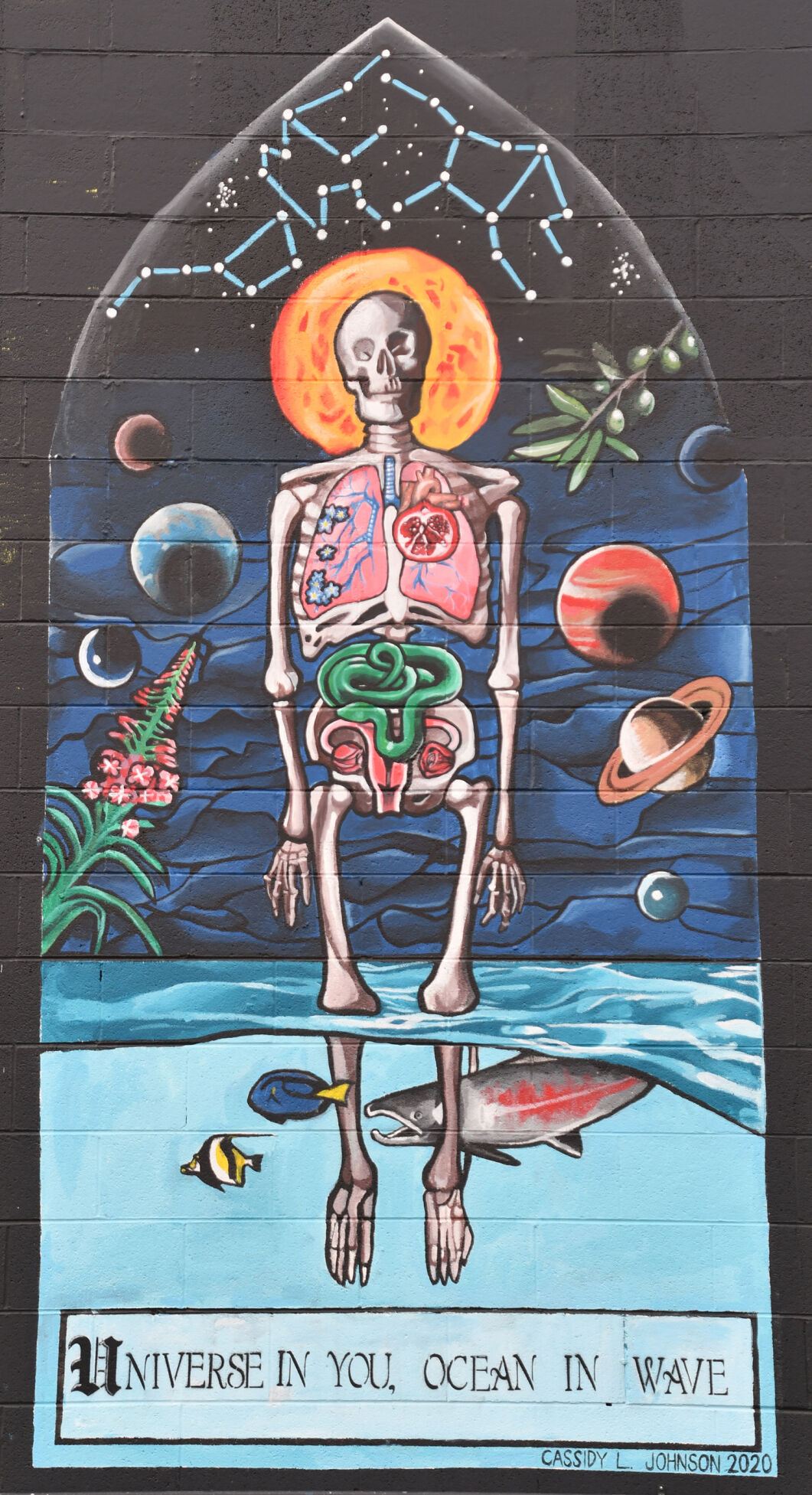 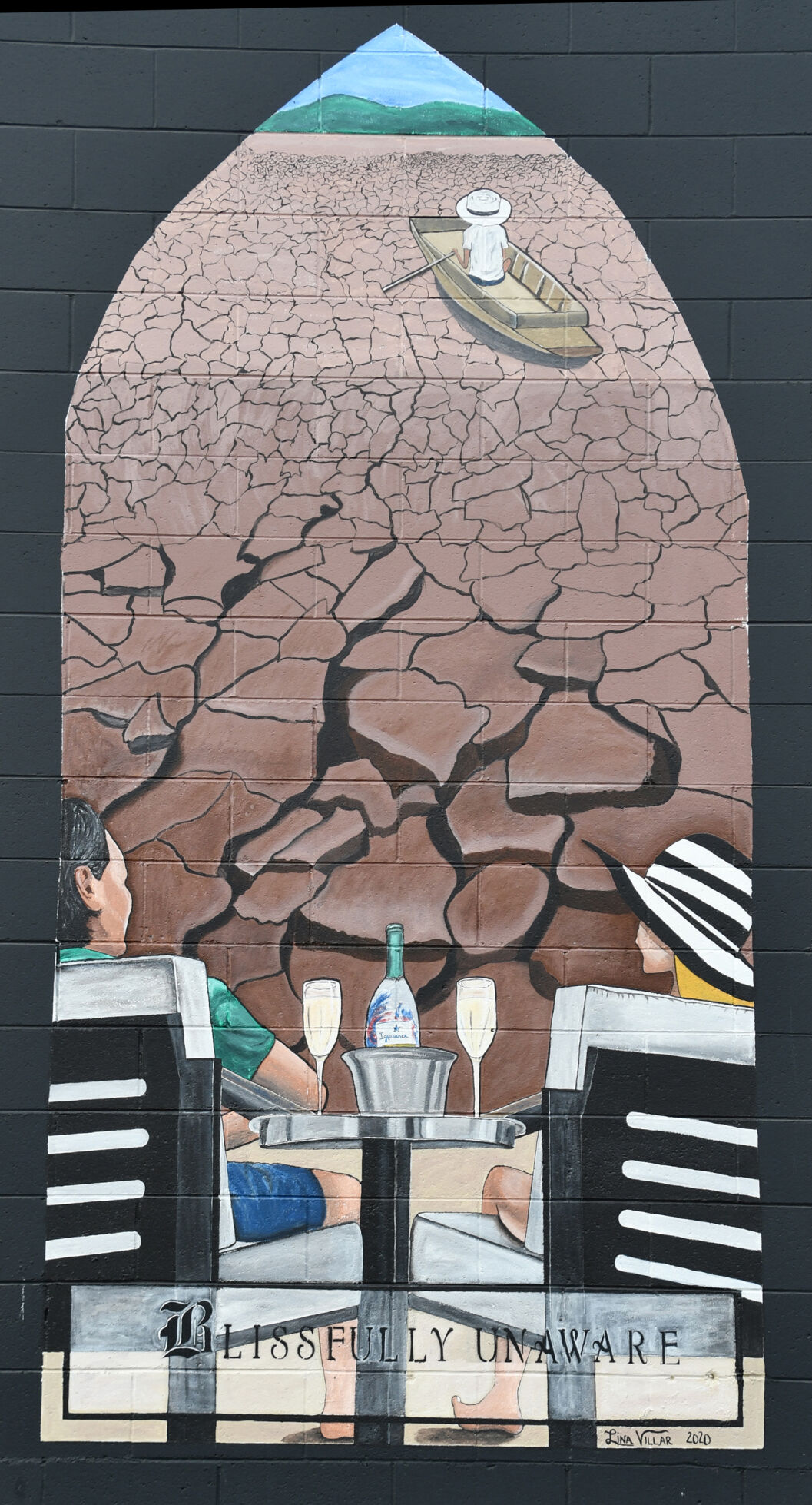 All cities display boastful public art, usually presenting a biased viewpoint. Perhaps cave dwellers invited nearby cave neighbors to see their wall imagery, bragging about what their clan had accomplished. Maybe those visitors weren’t happy to see crowing narratives stained onto rocky surfaces: killing huge beasts or defeating fierce marauders. Ok, I’m imagining the scenario, but it was the beginning of public art.

UAA art professor Thomas Chung and his students have produced outdoor murals resembling church stained glass reflecting, “cultures across the world that believe a human being’s role is caretaker of nature and Earth.” Religious windows reference truth and light flooding into places of worship. Chung’s windows are on the East wall of the Museum’s SEED Lab overlooking parking spaces and therefore have to exude elucidating tropes through the artists’ designs and color values. Pieces reveal realities of Global Warming, while lessons learned might help minimize Climate Change.  Chung’s own piece, ‘In Every Mistake, a Lesson’ portrays a monk and his dog standing on a dandelion-infested lawn. The verbiage alludes to this weed having crowding out indigenous plants.  The monk appears to have thrown his face mask into the pristine stream, referencing his wish to see the Pandemic float away. But why is this pious soul smoking? Cassidy Johnson’s ‘Universe in You, Ocean in Wave’ centers a female skeleton complete with internal organs, surrounded by flora and planets. The skinless woman wades in a crystal ocean of fish. Lina Villar’s ‘Blissfully Unaware’ depicts a couple in the foreground enjoying cocktails by a parched lake where a woman in a rowboat is oblivious to the difficulty of rowing through dried mud—dehydrated from Climate Change.

How does a society deal with public art which has acquired a sell-by-date?   In the nineties when the Berlin Wall was torn down, remaining sections morphed into public art. Berliners and tourists now stroll past graffiti-emblazoned concrete, more a backdrop for all ethnicities who picnic on the banks of the Spree, and less a memorial to those imprisoned behind the wall, with some shot climbing or tunneling to freedom. In former Communist countries, notable statuesque dudes have been removed from town-squares and sent to dictatorship-camps.  In Moscow’s Muzeon Park of Art, a statue of Stalin stands in front of an installation of 282 caged stone heads, homage to millions he murdered, allowing tourists and historians to contemplate a tortuous time. Budapest’s Memento Park allows Lenin, Marx and Engels to engage in Communist ideology for eternity. Husband Dave and I once spent eight hours driving/walking through Gettysburg National Military Park dedicated to Northern and Southern heroism. A farmhouse where ghoulish medical practices failed to save young soldiers stands near a repair shop for the now decorative caissons. So far no one has objected to this kind of remembrance.

‘Black Lives Matter’ has rekindled the belief that hurtful monuments should not serve as focal points in American cities. Many Confederate hero-statues were commissioned after Reconstruction ended in 1877, at a time when Blacks served as scapegoats, visual retaliation for the loss of the lucrative slave trade (2).  Some sculpture has been destroyed, others are in hiding, and the debate goes on as what to do with traumatic imagery, which after all is storied art, made by craftsmen who weren’t paid much.  In the past, art was only scrutinized by a narrow-minded upper class, mostly white. Today, a broader based multi-racial spectatorship demands art speak to them. But, can all genres, new or reappearing, speak to everyone?

‘Public Art and the Fragility of Democracy’ by Fred Evans is a complex read about unpacking how a broad spectrum of society should enjoy and also understand public art. While Evans believes that sadly the voices of white supremacists need to be heard, he insists, “public art can enlist its aesthetic and political power to resist these destructive tendencies as well as to reveal new possibilities for a democratic way of life (x, 245).”  His two major examples, both privately and publicly funded, are Chicago’s Millennium Park, 2004, which he sees as a site of ‘celebration and entertainment’ and New York City’s National September 11 Memorial, 2011, as depicting ‘mourning and death’ (19).

Highlighting the grounds is the Frank Gehry band shell that provides audiences, sitting on the grass or in seats, to hear quality acoustical sound. The Crown Fountain allows kids to wade between the two 50 foot glass brick towers which project giant photos of  all walks of Chicagoans, and  can be seen from planes. Anish Kapoor’s polished steel Cloud Gate, affectionately named the Bean, mirrors the Chicago skyline. Kapoor challenges the idea that her seamless metal artwork resembles a carnival-esque funhouse. Visitors of all shapes and colors see themselves, “not so much a mirror of the self or of the city as a mirror into the self and in which we can see ourselves in union with others (175).” Critic Nicolas Bourriaud referencing Millennium writes, “interactive artworks introduce a ‘formal disorder’ into the aesthetic arena. This disorder inherently provokes dialogue with the viewers of these objects and implies a ‘discursiveness’ that is never finished (169).”

The grounds and museum focus is Michael Arad’s two pools, ‘Reflecting Absence’ which replace the twin towers’ footprints.  According to Evans, “Visitors standing at the edges of these structures see curtains of water that continually cascade down the walls of the voids into pools 30 feet below. The placid surface of the water then spills into a smaller void located at the center of each pool and disappears into recycling reservoirs beneath the memorial. The two voids never fill up and thereby continue to mark the absence of those lost in the 9/11 attacks (189).”

However, this iconic space does not appeal to everyone. Some suggest that the impromptu candle vigil in New York’s Union Square, the day after the attacks, saw all races, religions and economic strata, coming together illustrating peace, love and unity more than the actual Memorial (183).  Critic Adam Gopnik sees the Memorial as Kitsch or a “cemetery that cowers in the shadow of commerce (203).” The American-Arab Anti-Discrimination Committee wants visitors to know that “the 9/11 attacks were committed by a small group of terrorists who do not represent Arab Americans and Muslim Americans or Arabs and Muslims worldwide (211).”  Memorial officials purposely “excluded attempts to explain the motives and grievances of the attackers (210).”

The next time you walk past public art, ask yourself what is its present intent?  Philosopher Henry Pickford  writes, “If the aesthetic-historical artwork is to succeed, then, it must exhibit an ‘implicit tension’ between its aesthetic and historical dimensions rather than one distracting us from or otherwise canceling out the effect of the other (186).”  Fred Evans concludes, “The voices that can participate in interrupting and revising the always provisional meaning of democracy and its public art criterion must therefore be able to come from anywhere (248).” Public art has a complex task regurgitating pain and/or becoming a catharsis, in situ or when relocated.

Mini Sleuth: ‘Public Art and the Fragility of Democracy’ by Fred Evans was quoted in this essay and is on Amazon. Anchorage Museum SEED Lab is at 111 6th Avenue; some Museum verbiage was used.