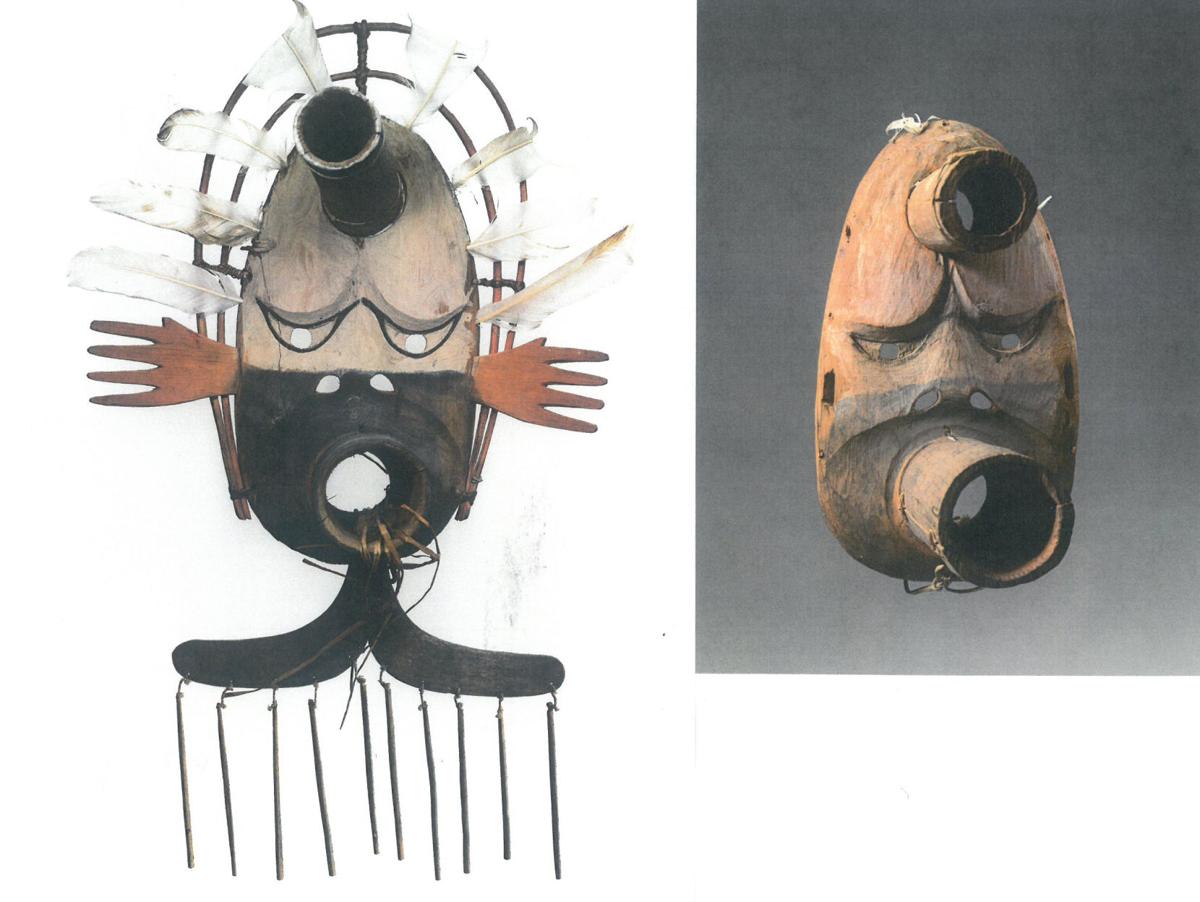 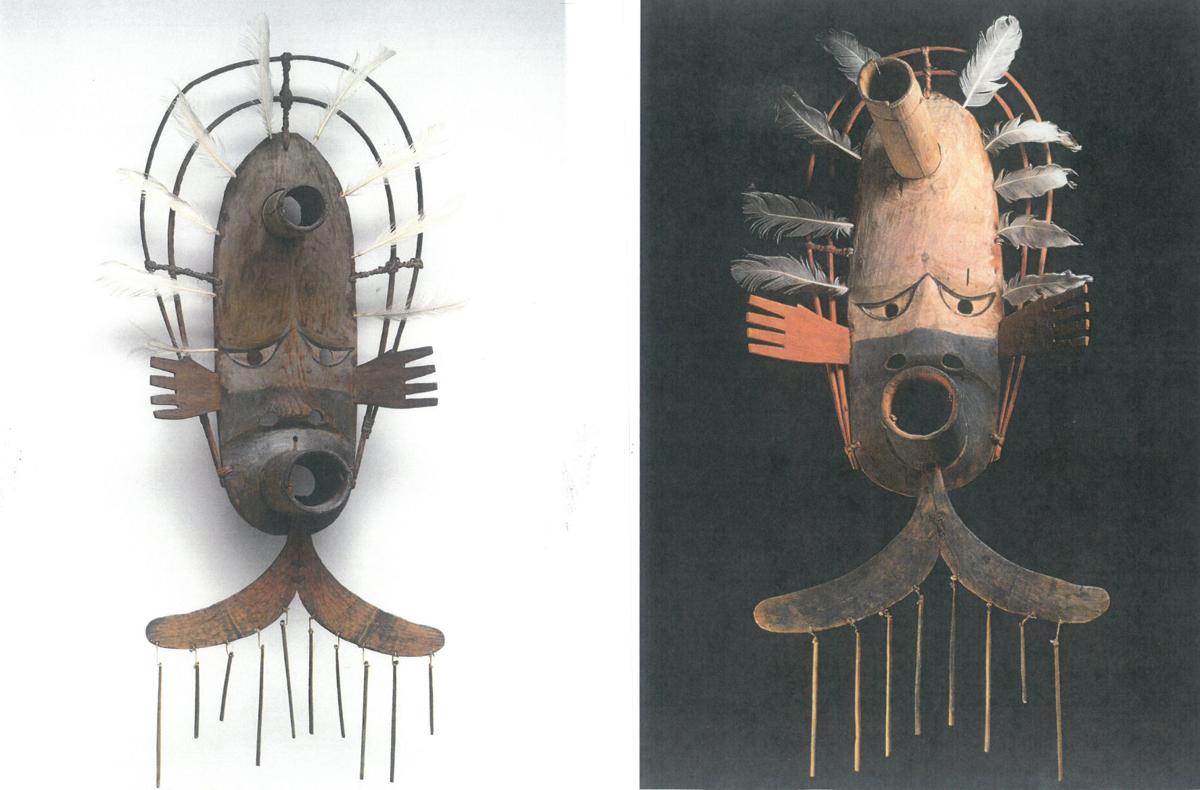 ‘Kegginaqut:Yup’ik Masks’ at the Anchorage Museum (thru September 8) were made in the early 1900s, and still hold truths about how humanity should embrace living in the present. As Formalist works, these four wooden faces soar through time, thanks to their large holes that blow in the cosmos. Two of these ‘weather masks’ reside at the National Museum of the American Indian. The third can be found in the Menil Collection, Houston. The fourth, which is missing its hands, feathers, flukes and hoops, was discovered at UCLA’s Fowler Museum of Cultural History. Bought/sold by collectors, some or all may have been shown in a bygone era: Lewis and Clark Centennial Exposition, 1905, and Alaska-Yukon-Pacific Exposition, 1909 (Mooney and McIntyre 92, 93).

Sadly, masks are often overlooked by museum visitors who see them as cartoon-esque, unlike representational portraiture or sculpture, which is easier to comprehend. Ok: with a little detective work masks can be understood. These pieces denote: “the forces of the earth, the spirits of the winds who drive all life.” The lighter upper halves of the faces signify “winter, day, light, knowledge,” while the darker lower sections signify, “night, summer, darkness, mystery.” Surrounding hoops suggest human introspection. Hanging sticks represent the oil, gratefully harvested from a seal or whale, needed for survival (Mooney& McIntyre 92, 93).” Mask making, with corresponding stories and dances learned from Elders, becomes an unfolding story.

Like the Yup’ik, many ancient cultures explained their existence through theatrical messaging. According to Hans Belting, “The history of the human face begins in the Neolithic period with masks that represented or replicated faces….They served as official proxy faces for spirits of the dead, who had lost their bodies…. Even when a mask concealed the face or was presented by an anonymous wearer, it nonetheless brought a new face into view….First, there is the complicated and often dramatic relationship between mask and wearer, a relationship that was often surrounded with taboos if the wearer had to remain anonymous to avoid endangering the presence in the mask. Second, the dramatic presentation of the mask is often represented by the oversimplified shorthand notion of ‘the dance.’ In this context dance is really a collective term for the performative presence of the mask when it appears along with the ritually prescribed movements of a dancer who functions primarily as an actor onstage. In doing so, the man-made mask imbues itself with a life that it lacked when it was a mere object….Masks take command of the body more decisively than the face can, and they dominate the body that wears them. By transforming the body, they imbue it with a symbolic power that allows the expression to take on a life of its own….In Europe the mask suffered the loss of such significance very early; today it often survives only in folklore or during carnival season (Belting 32-34).”

Now you’re thinking — it’s still hard to know why ancient societies valued these objects. As modern day humans who feel superior to past societies, we have lost the ability to appreciate survival skills these masks stood for. Since we now only see masks in drama productions or in a museum case, it’s easy to see why we can’t visualize them as anything but dust collectors.

Don’t give up—we’ll dig deeper beneath the materiality of these masks. Yup’ik of Western Alaska were hunter gatherer communities: edible greens and berries, animals and fish, river driftwood found after spring break-up. According to Ann Fienup-Riordan, “Each ceremony emphasized a different aspect of the relationships among humans, animals and the spirit world (Fienup-Riordan 40).”

Masks were originally made by men who often destroyed them after ceremonies. Masks acquired supernatural powers and had to be carefully handled--wrapped and hidden from the human gaze. All masks, including ones that represent plants and animals, have a persona (yua). A mask made with both animal and human representation possesses dual personalities (Fienup-Riordan 59-72). Masks are not just pretty; they record generations of Yup’ik civilization.

The invasion of Alaska by Europeans mid-Nineteenth Century brought governance, religion and disease. Intruders attempted to snuff out centuries of purposeful culture from communities who only wanted to ensure the return of their food supplies, and honor the souls of their ancestors. In spite of drastic changes, ceremonies and feasts managed to survive even though these functions were seen as Pagan and useless to those now in charge. Yup’ik masks kept being carved, employing age old themes: influencing the harvest, performing humorous or complex human stories, becoming helper-sprits for shamans. As Christianity replaced ‘so-called’ Paganism, Western rituals filtered into traditional Yup’ik storytelling, and dancing. With the arrival of late-Nineteenth Century collectors, Natives began marketing masks too. Museums and collectors categorized masks as objects d’art or scientific specimens, often negating their original intent.

Today, masks are made with both ancient and electric carving tools. Traditional hues: white, red, black and blue, originally derived from vegetable and mineral matter, can be mimicked in commercial paints. Historical decorations: feathers, grass, animal parts, beads and buttons, can be foraged or store bought. Above all, Yup’ik masks contain respect for the embodiment of living, which is the essence found in masks (Fienup-Riordan 154-161). Example: carver Perry Eaton’s masks (Kodiak-Suqpiaq Alutiiq) are sought after by collectors worldwide, thus morphing aesthetic qualities with contextual spirituality.

The Heard Museum’s recent exhibition, ‘YUA, Henri Matisse and the Inner Arctic Sprit’ (closed February 2019) displayed the Kegginaqut: Yup’ik Masks (aka Tumanret) before they spent the summer at the Anchorage Museum. Of note: this exhibition catalogue has gorgeous photographs of these masks. The main theme of this show presented Yup’ik masks collected by George Duthuit who married Marguerite, Henri Matisse’s daughter. George and Marguerite saw similarities between a Matisse work and Yup’ik masks. Matisse, of course, had developed his unique ‘line-quality’ over decades, so it may be fanciful to imagine his final works were based on discerning Yup’ik masks owned by his children--but who knows? True, Matisse’s compositions possessed an inner spirt and appreciation of the natural world akin to Yup’ik masks. ‘Yua’, or the emergence of the human spirit found in everything, may sound people-centric. Remember, Yup’ik also knew not all spirts were good. However, there’s an undefined vitality in both Matisse’s work and Yup’ik masks which is the key to understanding both.

Removing masks from their original purposes: dancing, storytelling, and making them into museum objects, alters meanings, which requires some sleuthing and contemplation--well worth it. In today’s fast- paced world we seem to lack an all-around gratitude for mere existence. With Climate Change upon us and Nationalism once again on the rise, looking at the Yup’ik culture embedded in these four masks with concern for plant and animal preservation that sustains life, hopefully will make us realize that we aren’t that smart when it comes to balancing underlying and essential elements that make humanity function/survive in an ethical and practical way.

Mini Sleuth: Special thanks to the authors who helped me learn about Yup’ik masks: ‘The Living Tradition of Yup’ik Masks’ by Ann Fienup- Riordan, on Amazon and at the Anchorage Museum; ‘Face and Mask’ by Hans Belting on Amazon. ‘YUA Henri Matisse and the Inner Arctic Spirit’ by Sean Mooney and Chuna McIntyre at the Heard and Anchorage Museums. Visit Perry Eaton and his masks on Facebook.

Jean Bundy is a writer, painter living in Anchorage.