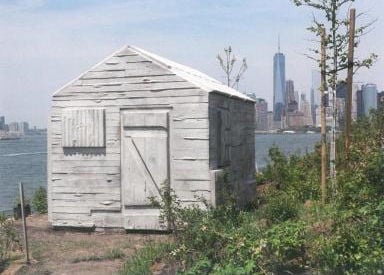 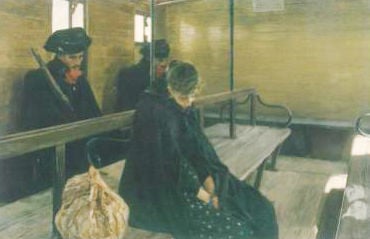 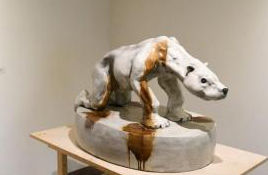 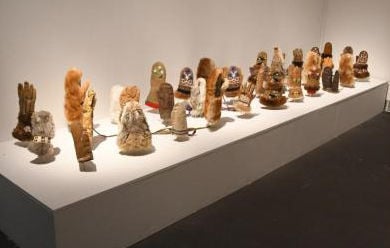 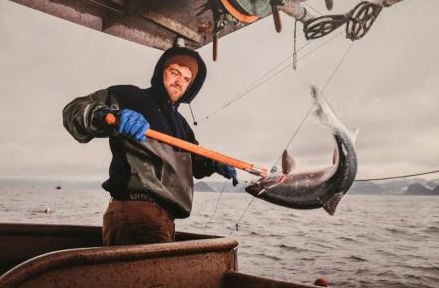 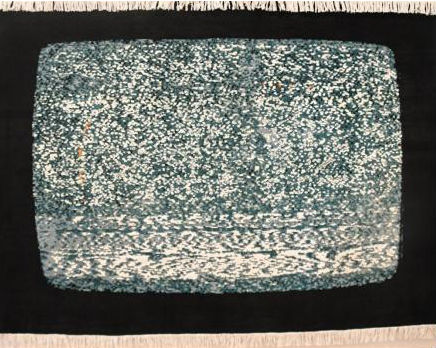 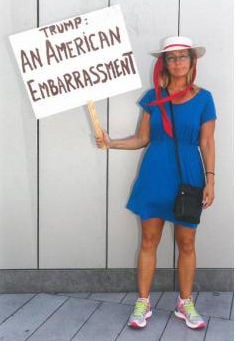 In my art wanderings, I seek out contextual narratives, which I often rework into my own paintings. Sometimes an image will express more than its companion writings. Social injustice, perseverance of man, and Climate Change issues — evident in our ever shrinking planet, made profound statements visually in 2019. Here are the best 10 pictures I sleuthed.

#1: President Trump and his antics have become ever present on the American scene, engulfing the world with phony rhetoric. This Martin Parr photograph, from last spring’s exhibition ‘Only Human’ at the National Portrait Gallery, London is of a woman standing outside the Republican National Convention, 2016, protesting Trump’s impending nomination.

#2: Nicholas Galanin’s ‘White Noise, American Prayer Rug, 2018’ became a major feature at the Whitney Biennial 2019, and fortunately wasn’t removed during the Kanders protests and eventual resignation. Galanin’s work contains social messaging that challenges materiality, while allowing viewers to freely contextualize. The wool/cotton rug, the size of two conjoined plywood panels, pictures a scrambled analog TV. The Post-war era promoted this novel entertainment box which surfaced in living rooms as did prejudicial racial discussions about programming and the world at large. Prayer rugs are also synonymous with the Muslim faith that struggles to find a voice in America’s continuing intolerance. Retrofitting this image into gallery space reminds viewers inequality still exists.

#3: At the Anchorage Museum’s ‘Alaskans and Salmon’ show, this everyman/fisherman is unhooking his catch as he routinely does. Alaska’s fishing industry suffers from Global Warming; fluctuating runs and pricing, increased ocean temperatures and acidity. The proposed Pebble Mine Project could further damage Bristol Bay, one of the world’s major salmon spawning grounds, and thus destroy the unique commercial and tourist fishing industries forever.

#4: Sonya Kelliher-Combs’ seventy mittens of real fur and hide entitled ‘Goodbye’ commemorate those, including her family members, who have committed suicide. This piece in ‘Place of Origin’ brought tears to onlookers enjoying wine and finger food after a long day at the Arctic Arts Summit in Rovaniemi, Finland, June 2019.

#5: The exhibition ‘Americans’ at the National Museum of the American Indian, DC shows a ’70s, ‘Keep America Beautiful’ campaign poster featuring a posed Native American along with a slogan that hopefully left readers considering the double entendre: “In the Fight against Litter and Pollution, We Still Have So Far to Go.”

#6: The Anchorage Museum’s summer exhibition, ‘Death in the Ice: The Mystery of the Franklin Expedition’ explored Sir John Franklin’s fatal attempt to complete a Northwest Passage. Had Native oral histories not been discredited, much of what was recently uncovered could have been assessed centuries earlier. The remains of a leather boot from a sailor in peril, attempting to navigate snow/ice, did little good to insulate his feet from frost bite, gangrene and ultimate death; Arctic ‘Bunny Boots’ were decades away. This show is about man’s quest to tackle the impossible in order to attain knowledge, wealth and, ironically, immortality.

#7: ‘Made of Stone’ was a small but unique show on the first floor of the UAA/APU Consortium Library. Alanna DeRocchi’s Polar bear is hyper-anatomically correct and thus haunts in its starving state. Her rendering drags itself, as it resists gasping for its last breadth. Polar bears have become poster children for Climate Change, as their habitat has been greatly disturbed. Looking into the bear’s faux ceramic eyes tells viewers that the real creatures deserve saving.

#8: The ‘Sorolla, Spanish Master of Light’ exhibition at the National Gallery, London displayed ‘Another Marguerite!’ (1894) picturing a young woman about to be imprisoned for killing her bastard infant. Joaquín Sorolla y Bastida (1863-1923) was known for his placement of light in portraiture and historical epics; here he depicts a common social ill of his era. This work remains relevant because in the twenty-first century injustices haven’t gone away. Although Sorolla’s work is over a hundred years old, women and children continue to be the major victims of poverty and war.

#9: Rachel Whiteread molds discarded objects which not only retain original auras, but imagine new metaphors in the reworked/remade process. Castings can also fracture original meanings and become vehicles expressing grander themes. ‘Cabin, 2016’, on Governors Island overlooking the Statue of Liberty and the 9/11 Memorial, is molded from an old shed, with essence of Thoreau and his Walden Pond tropes. It stands as a monument to the immigrant, or individual who has defied all odds to succeed/achieve, thus contributing to ideals of a global-thinking America without walls.

#10: On the outside of the Anchorage Museum is a mural, ‘THINKNEXT OVER NOW’ by James Temte. The billboard-esque photograph, made up of large plastic tessellations, depicts a pre-teen standing in a field, clasping a handful of dirt/vegetation. The youth could be male or female of any ethnicity. This young person is also wearing a gender-less logoed t-shirt and warm-up jacket. Hair is shoulder length with bangs—any kid’s cut. Some of the background squares have deliberately been omitted, creating black emptiness, suggesting what life might be like when Climate Change erases section of the planet. The entire piece becomes a narrative for Global Warming, with this ‘every-youth’ cradling a sample of precious Earth.

Come along in 2020 as I continue Sleuthing for artists and their work, which visually contributes to making a healthier planet for all. Happy New Year!

Jean Bundy is a writer/painter living in Anchorage