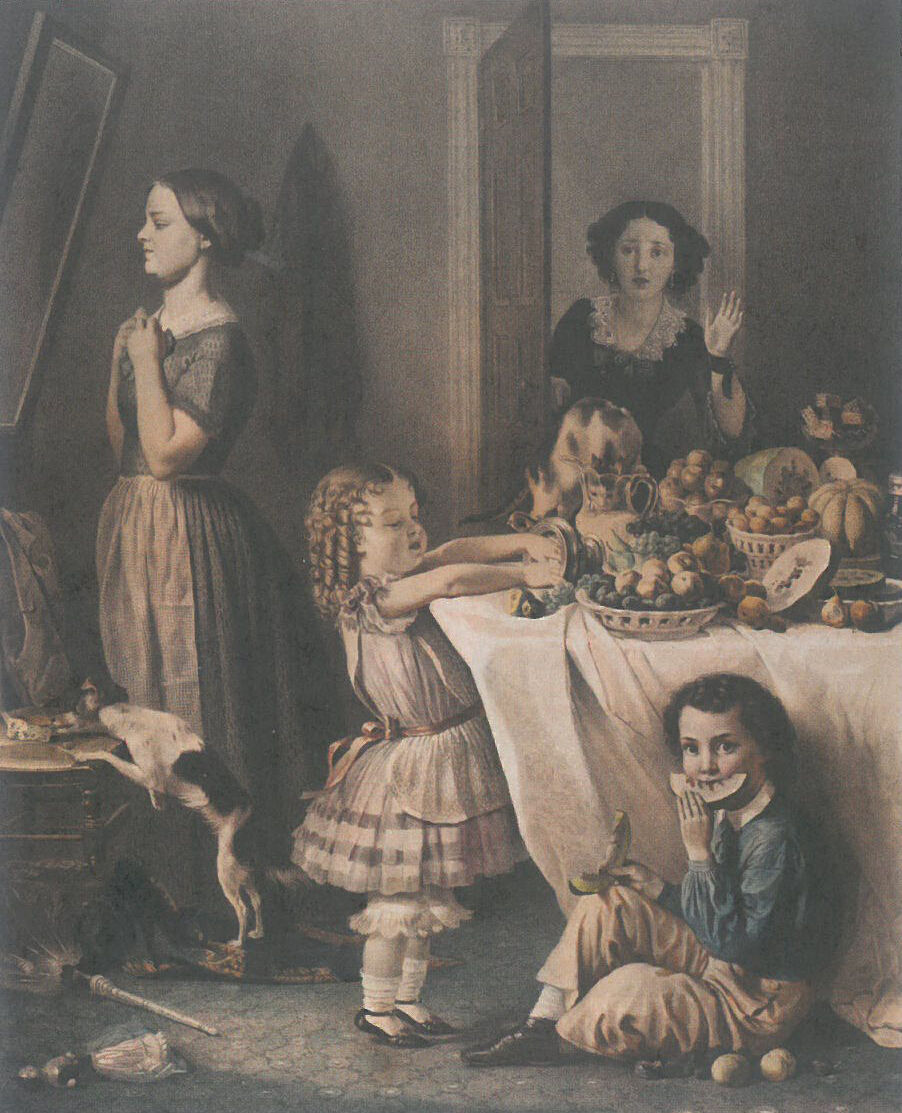 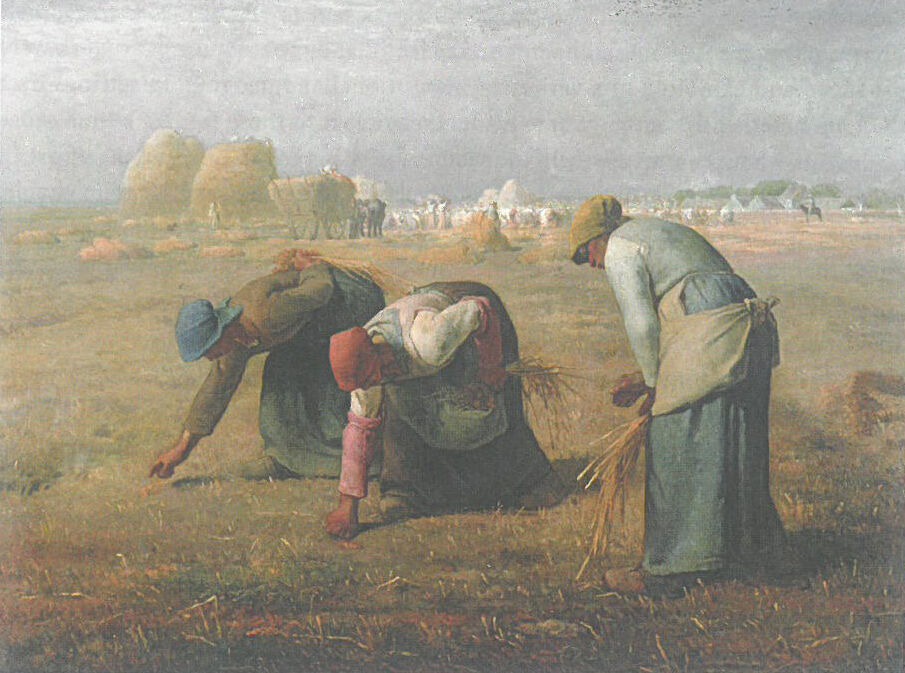 The Gleaners, 1857, by Jean-Francois Millet 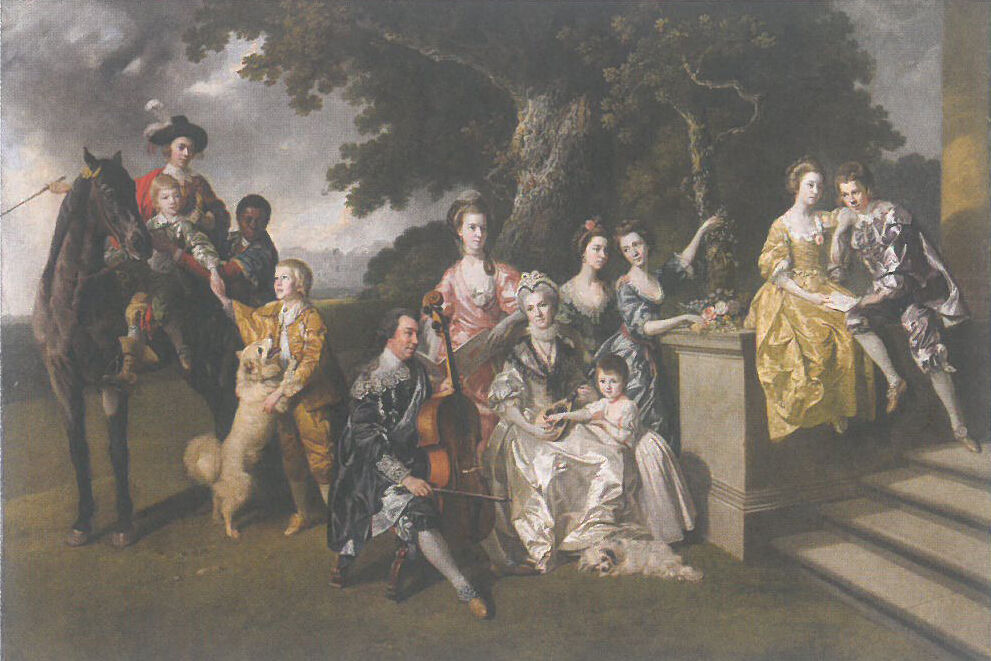 The Family of Sir William Young, 1767-69, by Johannes Zoffany

‘Painting by Numbers, Data-Driven Histories of Nineteenth-Century Art’ sounds like you are about to learn how to dab a color onto a line-drawing with subdivided numerical spaces, which indicates where to insert the numbered hues--it’s not.  This tome looks at past artists who gravitated to portraiture, landscape and genre—but why?  As a painter, I think it’s important to understand where you reside on art’s chronological pathway, even if the gravel is sometimes slippery, and your footing becomes unstable. Did artists from another era choose categories based on whim, or were they influenced by the times and environment in which they lived? Greenwald, an art historian and economist, has done research and presents charts, which may be intimidating. Fear not-- her narrative is very clear. I recommend reading the text first, and then returning to the data. Four paintings from this book provide a visual explanation.

‘The Gleaners’, 1857, by Jean-François Millet, who wrote, “Paris, black, muddy, smoky,” is an example of a Nineteenth-Century French painting, free of the grime and poverty of urban Paris (Greenwald 52). The Industrial Revolution gave artists the railway to work in the countryside, and easily return to network with their metropolitan colleagues and dealers. While this picture shows pristine horizons, it also depicts haggard peasant women picking the remains after the harvest for personal survival. Artists like Millet depicted the grim realities of modern agricultural communities, disturbing prosperous urban audiences, who needed to get real (Greenwald 55, 82). Mechanized farming and factories not only overworked the lower classes, early technology left communities in abject poverty as some with age-old skills couldn’t assimilate. Ambiguities of the modern world were visibly manifested thanks to Millet.

“Do women have to be naked to get into the Met. Museum ?  Less than 5% of the artists in the Modern sections are women, but 85% of the nudes are female,” 1989, is a poster by Guerilla Girls (Greenwald 85).  Insertion of this piece may confuse readers, as it’s not from the Eighteenth or Nineteenth Centuries. Yet, it reminds that today’s women in the art world still lag behind male counterparts. Aside from being penalized for being female, maintaining a household, raising children, taking on a second job and accumulating less money, continue to derail female artists. Traditionally, women tended to make smaller works, using pencils and watercolors, which could easily be picked-up/cleaned-up between other pressing responsibilities.

Some women of means like Mary Cassatt found the European aesthetic atmosphere more inviting. There was a colony of American female sculptors in Rome (Greenwald 102). Back home, The Pennsylvania Academy of the Fine Arts began admitting women in 1844, but leasing studio space was considered inappropriate.  Women were barred from male-only art clubs; in 1866, The Women’s National Art Association opened in Philadelphia (Greenwald 87, 88, 92, 93,101). Women continue to lack dealer-representation, which is why they still gravitate to art co-ops and show in cafes.

‘Fruits of Temptation’, 1857, by Lilly Martin Spencer, is a genre painting, showing domesticity, albeit staged. Spencer was raised by progressive English parents who immigrated to Ohio. In 1844, she moved to New Jersey with her Irish, tailor by trade, husband who became her studio assistant, helping to raise 13 children--7 survived to adulthood (Greenwald 103,104). Very unusual to be the breadwinner, Spencer became the most famous American woman artist in the Mid-Nineteenth Century, but felt underpaid.  She wrote, “ progressive family life could nurture her professional ambition and facilitate her career but did not protect her from the significant time demands and professional repercussions of motherhood (Greenwald 104,105).” Spencer used her family as subject matter, when her male contemporaries had more choice in rendering what was in vogue—patrician portraits and landscapes. Some might argue, Spencer wasn’t the most famous woman painter of her era, which might explain why many works have been lost.

‘The Family of Sir William Young’, 1767-1769, by Johannes Zoffany,shows a prosperous English family on their estate. Their elegant brocades, healthy pets and children, are posed underneath an ornamental tree adjacent to the broad stone staircase, centerpiece of a stately home. Young was the son of a Caribbean doctor/planter. The family acquired wealth, which allowed entry into the British aristocracy (Greenwald 150). In the background, a Black male figure, a servant and trope of Colonial conquests, artificially smiles as he steadies those mounting the horse. Greenwald concludes that painting the Empire was far less popular than rendering the homeland--‘England’s Green and Pleasant Land’, even though Britain, up to World War I, controlled one-quarter of the world’s land surface (Greenwald 115,116).  According to Beth Fowkes Tobin, when the Empire was occasionally depicted, paintings “perform ideological works, in part, by portraying imperialism in such a way that the appropriation of land, resources, labor, and culture is transformed into something that is aesthetically pleasing and morally satisfying (Greenwald 121,122).”  A few artists did manage to paint the nitty-gritty of Empire. Egypt and India, given their economic importance were the most depicted Colonial spaces (Greenwald 130,131).   An excuse for not painting the Empire was that it cost too much for artists to travel to remote places that were deemed savage (Greenwald 127).  With the acclaim of art critic John Ruskin, and painter Thomas Gainsborough, “British artists to engage with what they could directly observe, and portraying English landscapes effectively became a point of national pride (Greenwald 129).”

At the conclusion of ‘Painting by Numbers’, Greenwald decides that  Eighteenth and Nineteenth Century institutions like Britain’s Royal Academy were justified in not showing the cruel realities of what regularly occurred in the Colonies (Greenwald 151). While it’s true that buyers of British art invested and benefitted from Colonial trade, as did dealers and institutions, they were all cowardly wimps, which Greenwald should have acknowledged. ‘Painting by Numbers’ was published in 2021 after ‘Black Lives Matter’ and the ‘Me-Too movement’ which have forced museums and universities to reconsider what and how they show art, as well as who funds the process. Nonetheless, this book contains poignant historical information for painters, especially woman artists, who strive to paint the edgy, hoping to show in equitable venues.  Some artists continue to be limited by money, travel, studio-space, art materials, gender, and thus can only render backyard subject matter.

Jean Bundy is a writer/ painter living in Anchorage, and serves on the Board of AICA-International.