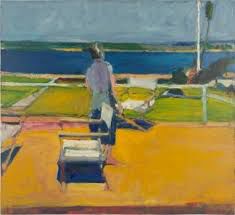 Figure on a Porch by Diebenkorn

Mulholland Drive, The Road to the Studio by Hockney 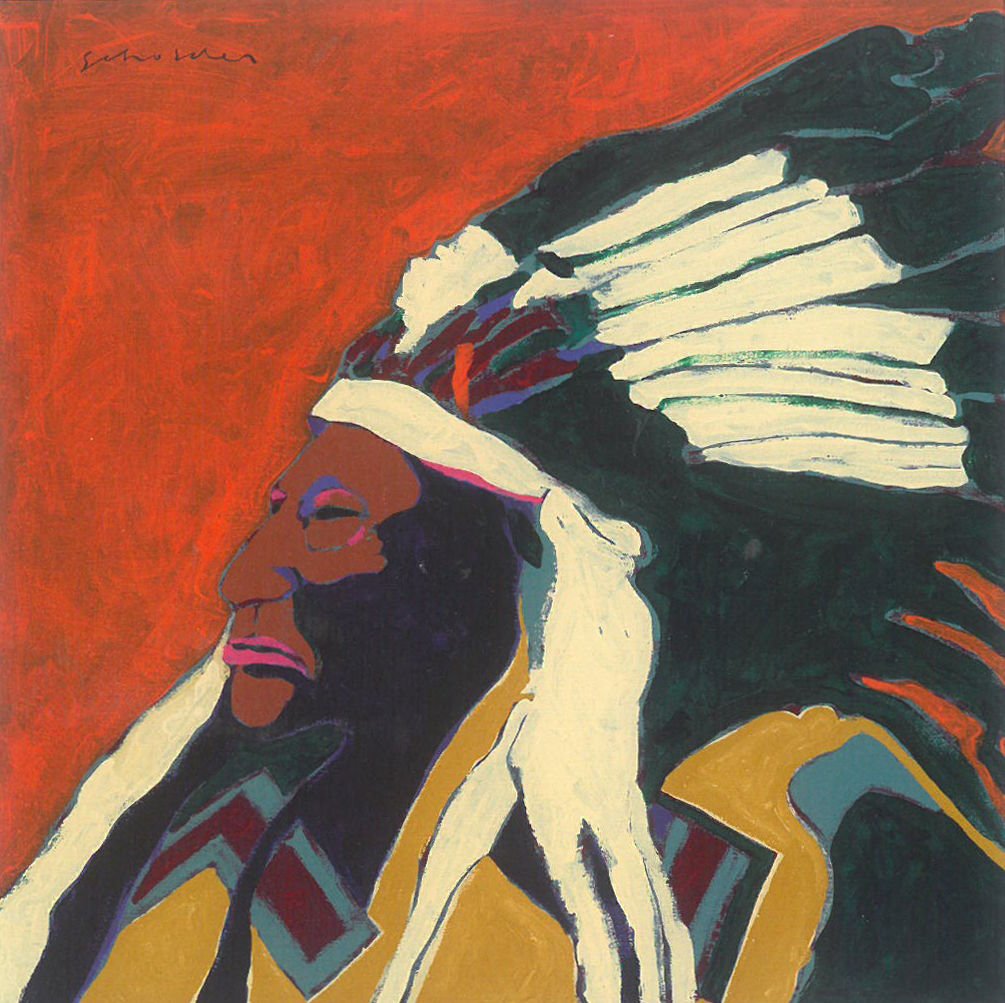 Portrait of a Plains Indian by Scholder 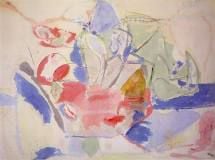 Mountains and Sea by Frankenthaler

With Anchorage greening-up, and quarantine restrictions cautiously lifting, I look forward to once again sleuthing for art at the Anchorage Museum. Heading to buy dog food the other day, I waited outside Alaska Mill and Feed as only twenty-odd shoppers were allowed in. Most were leaving with trays of bedding plants. People crave color, especially those who live in a Northern black/white winter world. And with sheltering-in-place for the past two months, getting outdoors and experiencing color seems even more appealing.

Think back to Kindergarten days when you drooled over someone with a bigger box of Crayola-s than yours. Color is one of the most frustrating elements art students have to master, because unlike black/white renderings, hues don’t jump-out, but have to be optically read in a push/pull manor. I didn’t begin to understand values until grad school when I was an assistant in a course on Bauhaus color. Pigments are seductive and often the reason why a painting is purchased—it looks good behind a sofa!

In the time of Leonardo, color was evolving from compositional filler to imitating the great outdoors. Going back further to ancient Greece, hues were queried by placing them on a line—white to black. In the Renaissance when painting grew in popularity, pigments still had to be ground from minerals, so tones were never the same (tube paint was an invention of the Industrial Revolution). Making art for the Church broadened into the secular realm, predominately patronized by nobility, who could afford pricier pigments. Artists took up palettes and easels, but continued using ground paints to separate geometric planes, distinguish light from dark, making their compositions harmonious.

It took Isaac Newton (1643-1727) to figure out color was light your eye/brain perceives. He fashioned the Greeks’ color line into a wheel, still used today. We envision red because green (opposite on the color wheel) is absorbed into an object. We envision yellow because purple is absorbed, and blue because orange is absorbed. 3-D color spheres which put black and white at opposite poles can be bought or made (Google). Adding black or white pigment to primaries and mixed colors creates infinite combinations.

Impressionists came of age when artificial hues were first manufactured as fabric dyes thanks to French chemist Michel Eugène Chevreul (1786-1889) who realized that complementary colored threads became dull when twisted together in a tapestry. Placing threads side-by-side created vibrant ‘optical-mixing’, and the beginning of Modern artists telling stories with color. For centuries, line has sparred with color (colore vs. disegno). With line generally winning, color has, at times, been dismissed as having no contextual significance. Pooh-Pooh--here are four painters whose colors not only brilliantly explode, they know how to gray-out hues for contrast. Newton’s discoveries keep surfacing into Post-modernity.

Richard Diebenkorn (1922-1993) is identified with San Francisco abstractionists. ‘Figure on a Porch, 1959’ resembles Matisse but grittier, and Hopper, only less lonely. Diebenkorn’s heavy impasto pigments overtake rest zones. His horizontal bands smack of traditional landscaping, but he has centrally imposed abrupt interruptions: captain’s chairs askew, stiff standing woman and odd flagpole. Orange/yellow foreground pulls towards the ultramarine blue water. Red undertones can be found everywhere, and gravitate to the green in the middle ground and headland just before a gray/blue sky and gray/blue woman’s shirt attempt to tone down all the loud paint. Black, often found in many Diebenkorn works, becomes boxy shadows under chairs, and the woman’s pants. Like Matisse, black is some distant blurry object, this instance, under the flag pole, and maybe the flag too. All this black pigment leads the viewer’s gaze diagonally/dramatically across the painting, providing contrast.

Helen Frankenthaler (1928-2011) was a New York abstractionist (in a male dominated art world) who was associated with the Color Field movement. Expressing materiality, she poured thinned layers of paint onto raw canvas (not great for conservators) allowing the cloth’s weaving exposed. ‘Mountains and Sea, 1952’ is a pastel landscape resembling a flower bouquet. Patches of medium blue in the middle reminds onlookers that water is involved; while light green pointy shapes in the background make viewers think of mountains. Pinks pull to the light olives, while pale olives pull to tangerines. Frankenthaler turns a masculine mountain into a femme-fatale.

David Hockney (b. 1937) makes everyone smile with his sherbet palette. Don’t think he’s just an eye-candy artist. Hockney has written a book about the early use of optic devices to make paintings. He’s experimented with snap shots to make collages before computers could tessellate and kaleidoscope electronically. Hockney has designed opera scenery too. Although British, he has lived in Los Angeles for decades, and is associated with La La Land decadence. ‘Mulholland Drive: The Road to the Studio, 1980’ flattens out like a bedspread of red, green, orange, blue fabric, interrupted with Pepto-Bismol pinks. Hockney reveals tennis courts, swimming pools, grids of housing developments and farmland, all strewn between frenetic highways and transmission towers, overlooking the ocean in the lower right. Happily there are no droughts, fires or mudslides—who doesn’t love Hockney!

Fritz Scholder (1937-2005) was a Native American artist who worked in California with Pop Artist, Wayne Thiebaud. He influenced other Native artists by giving them confidence to explore other genres besides traditional Native design and craft. ‘Portrait of a Plains Indian, 1970s’ uses earth tones with a touch of turquoise to merge the proud face of an Indian with Earth, yet all is Modern in its flatness. Squinting, the image of a Native complete with ubiquitous headdress (non-Natives incorrectly think feathers belong on all Indians) resembles rows of agricultural planting or a craggy mountain against a rusty/red sunset.

So, get your cameras and paints ready and immerse yourself in color this summer. Whether juxtaposing complementary hues like Chevreul, inventing analogous shades like a Venetian, Titian (1490-1576), or experimenting with overlooked buttons on your SLR—go forth and reinvent landscape this summer.

Mini Sleuth: Some history taken from ‘Bright Earth’ by Philip Ball on Amazon; Diebenkorn’s ‘Figure on a Porch at Oakland Museum of California; Frankenthaler’s ‘Mountains and Sea at National Gallery of Art; Hockney’s ‘Mulholland Drive: The Road to the Studio at LACMA; Scholder’s ‘Portrait of a Plains Indian at El Paso Museum of Art;