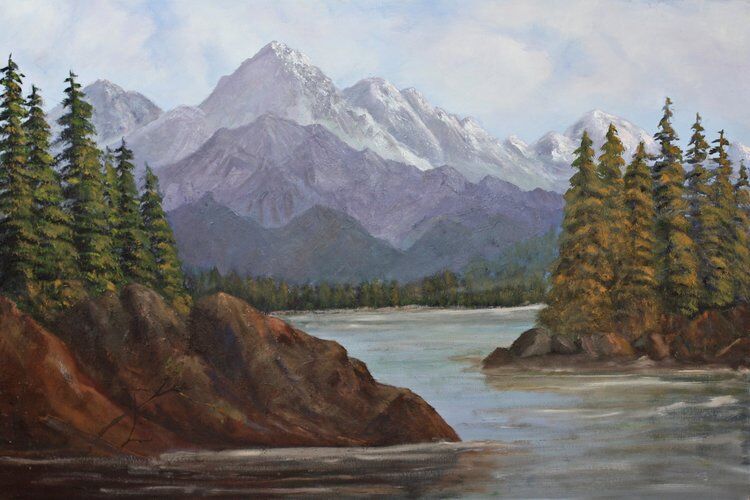 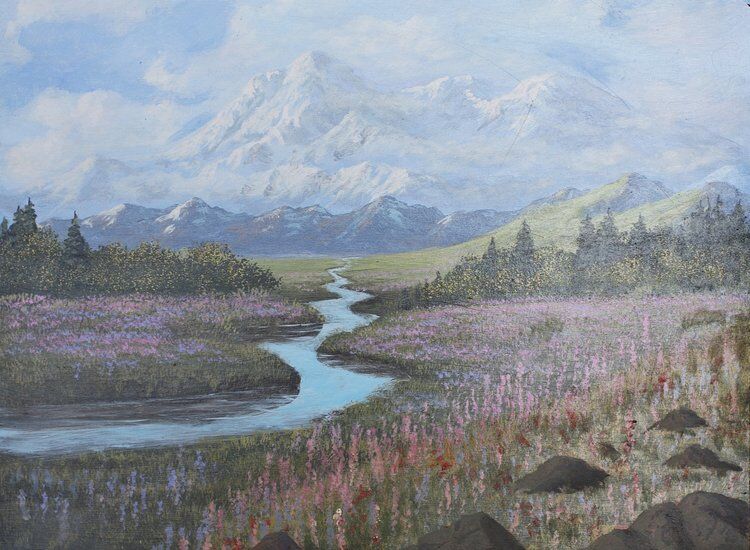 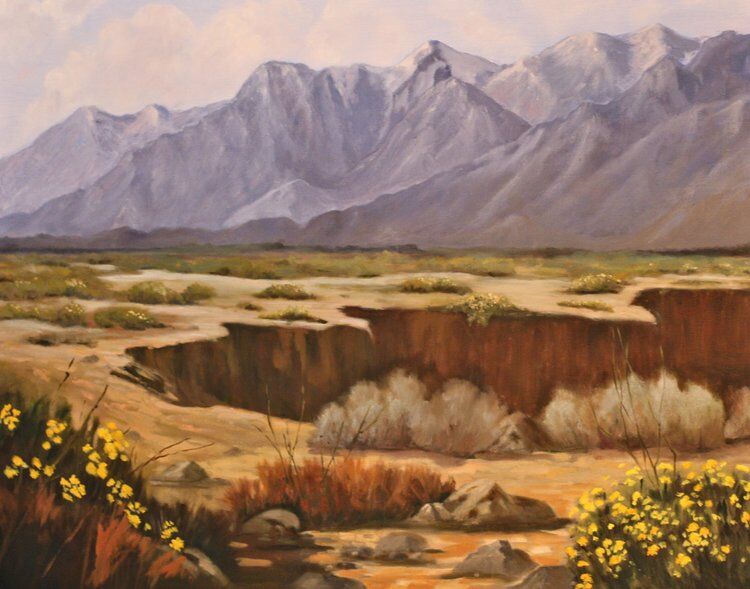 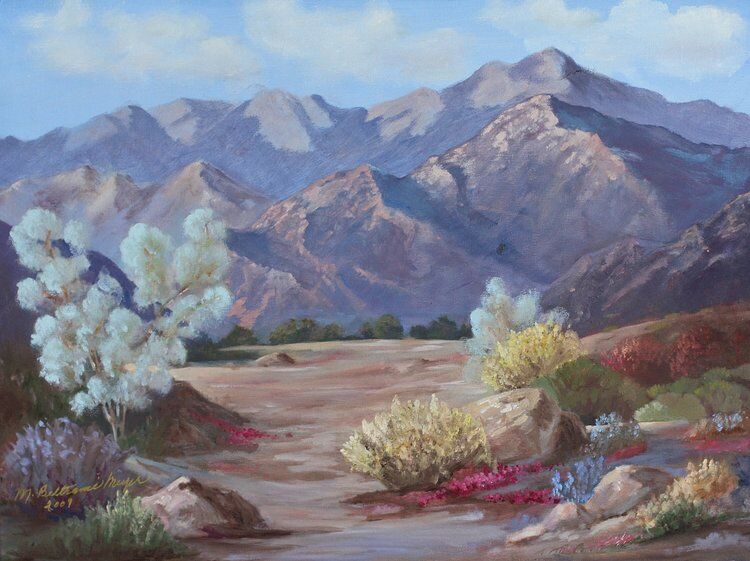 Over the past 50 years I’ve lived in Anchorage, many businesses have disappeared or been bought by outside chains. Muffler City & Brake (105 West 5th) is one of few family owned businesses remaining. An emporium for regular folks and auto hobbyists, you can actually consult with mechanics. Some working there are the children and grandchildren of original owners—Marge and Al Meyer. Marge is an accomplished landscape artist, who can back-light mountains in oil paint, making the masses feel jagged and have volume, as they drift in and out of passing clouds.

Back-Story: In the mid-Fifties, Marge and Al towed a 30-foot trailer up the Alaska Highway, planning on selling it in Anchorage.  The profit margin was allegedly high enough to cover driving back to Pasadena with leftover cash for college. Back then the Alcan was unpaved and alternated between dusty/gravel and liquid pudding when raining. I know because husband David, and I drove the Alaska Highway three times in the early Seventies, and it was life altering: isolation, bugs, moldy ham sandwiches and a mercurial roadway, which ripped our tires to shreds.  Well, the Meyers flatted/replaced so many tires, they couldn’t afford to leave Anchorage, not to mention the market for used trailers had tanked. So, Al and pregnant Marge wintered in their trailer; their only bathing facilities was in the Mountain View mobile home park. However, they saved enough cash to open their first store (Al’s brother Bill and wife Jean were co-owners) across from the Anchorage Times building (now court  offices), selling auto parts above the Polar Hotel (demolished), complete with ‘ladies of the night’. As Marge thankfully relates, “Al had always worked on cars.” Their store (orig. United Auto) moved to 5th and A, increasing inventory to attract hotrod enthusiasts. Living for a time in the back of that store, which they shared with a soul food restaurant, barber shop, and pool hall, they next moved into the former Chrysler dealership building, across the street, which continues to be the home of Muffler City.  At one time the Meyers owned nine auto stores from Anchorage to Kenai and even toy and stereo shops in the former Sears Mall. Marge reminisced, “ the phonograph  stopped selling.”

After the ’64 Earthquake, Marge and her four kids wintered for several years in California; Al remained in Anchorage, commuting every six weeks. That’s when she and several girlfriends formed a painting group in Costa Mesa. Marge recollects, “I never took an art class in grade school; I didn’t think I could draw.”

Marge must have had talent for recognizing design because, when she returned to Alaska, she and Al bought the ‘1966, Harpel Residence II’ situated in College Village. Bill Harpel, who started KHAR radio in 1961, died in a snow machine accident in 1968.  Harpel had hired architect John Lautner (1911-1994) an apprentice to Frank Lloyd Wright, to design a one-of-a-kind Anchorage home, which allowed the minimal winter sunlight and views of the Chugach Mountains to penetrate.  ‘Life Magazine’, 1967, featured the Alaska Harpel house, where the Meyers entertained many DC Democrats like Hubert Humphrey and locals like Mike Gravel and Bill Sheffield. Back in Anchorage, Marge took a drawing class at UAA, and attended several of Bob Ross’s early art clinics, when Ross was stationed in Fairbanks, and not yet a celebrity.

Marge and Al began snow-birding to Palm Springs; they stayed in the sun longer and longer as decades progressed. Proficient in rendering mountains, Marge says she likes to paint Alaska rocks over California’s San Jacinto Mountains. Four landscapes in this essay define Meyer’s long career in oils which reveal contrasting hues, opposing textures, and respect for the environment, as we all are stewards of the land.

Alaska Landscape #1: This three-tiered horizontal work, with two brown outcrops in the foreground and middle, are reflected in the meandering blue-green water, while becoming highlights on the evergreens, situated atop these rocky masses. A row of fir trees along the beach in the back-ground fades into the darker green/mauve lower hillsides.  Climbing up the jagged peaks, a Meyer specialty, purple mountains nicely contrast with the snaking turquoise waters below. The upper snowy peaks, with a soupçon of violet hues, are back-lit by a cloudy sky, whose faint blues make the bare patches on this final row of mountains noticeable.

Alaska Landscape #2: Bathed in a veil of autumnal mist, the Fireweed has peaked, while the meandering stream anticipates its ice-overcoat.  A few odd rocks in the foreground/right spar with the jagged peaks and valleys of the mountainous background, uniting the composition. The viewer must optically leave the lowlands, and follow the stream back to lower blue/violet hillsides, above the velvet-green trees and bogs of the far-middle-ground, thus complementing the Fireweed, which overtakes the foreground. The snowy mountains in the background float in and out almost unnoticed, between the moving clouds of the same color value.

Palm Springs Landscape #1: This is like a scene from a sci-fi movie where the barren land adds ambiguity to the oddly dressed space aliens. No extraterrestrials here, so the landscape must improvise.  A large brown sinkhole depresses the desert, becoming an inverted mountain, sparring with the range in the background. Occasionally the California desert gets enough rain to bloom, and dormant leaves and blossoms suddenly pop, as Marge vividly expresses. In the foreground, yellows, oranges and olive greens clash with the purple mountains in the background, as does the verdant terrain atop the sandy surface. This gritty beige middle-ground is needed to glue all the varying optical experiences together.

Palm Springs Landscape #2: When the desert blooms, colors explode. A variety of primary colors and textures are visible in the foreground among strewn rocks, which optically conjoin with the mountains in the background. However, it is the foregrounded reddish plants, reflected in sand and the purple mountain background, which unite and dazzle this work. The backlit blue sky lightens the heavy mountain masses, coordinating with a tiny patch of blue plants in the right foreground, while contrasting with the lemon and light-olive greenery in the middle.

Marge continues to commute between Anchorage and Palm Springs.  She is a member of the California Art Club (est. 1909) devours art magazines like ‘Art of the West’ and technique videos, while paying homage to Alaska’s renowned Sydney Laurence (1865-1940).

Jean Bundy is a writer/painter in Anchorage. She serves on the board of AICA-Int.