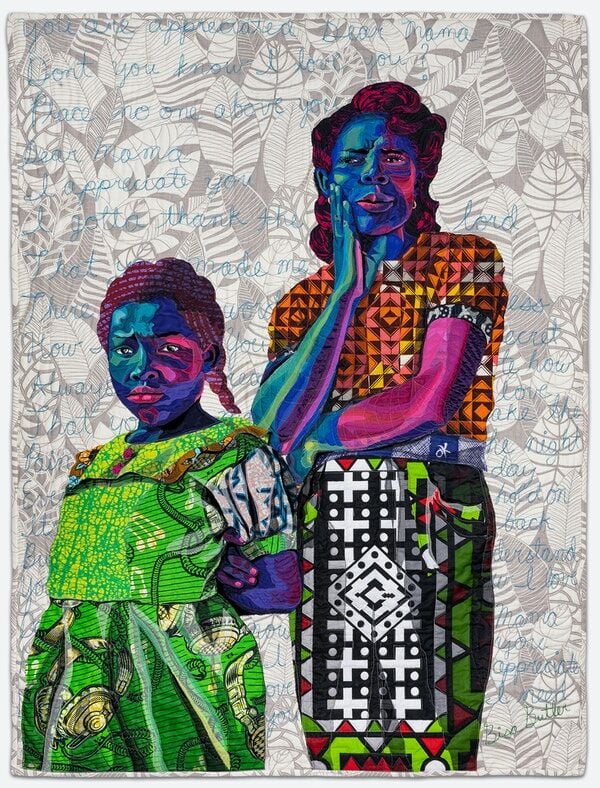 McElhinney, Jersey Palisades from below the Cloisters

I’ll admit holidays are weird this year. Husband Dave and I sadly decided to weather the Pandemic at home, relying on Zoom to make appearances with family, who are strewn across the country in their own household-bunkers.  Two artists, Bisa Butler and James Lancel McElhinney, made my present ‘Groundhog Day’ lifestyle more cheerful, as when ‘The Wizard of OZ’ went from black/white to color, as a kid.

Art Institute of Chicago’s exhibition, ‘Bisa Butler: Portraits’ (ticketed in situ; and www.artic.edu--thru April 19, 2021) is about ordinary people cut and appliquéd onto fabric. Spectators may think of Yinka Shonibare’s 3-D works, which reference Colonialism, or Nick Cave’s headless humanoids crafted from thrift shop clothing, Butler’s counterpanes are fabric-collaged, then sewn onto patterned cloth. Apparently, some quilters have complained her methods/materials are not true to the quilting genre. Art has no correct methodology! I interviewed Hawaiian fabric artist, Mary Haunani (‘Senior Voice Alaska’, June, 2010) and she told me Native Hawaiians preferred to appliqué local flora, rather than cutting cloth into squares and adopting Colonial designs, once insisted upon by New England Missionaries.

Butler uses contemporary and vintage photographs as inspiration. Unlike home sewing machines, a large industrial arm is free to stitch the tiniest swatches without bunching-up layers of material. Like painter Kehinde Wiley, her compositions have no ground; they become timeless and belong to every place. Butler wants her bodies to transcend race and culture, so skin tones are also psychedelic. Viewers are meant to ignore ethnicities and focus on the inner-self portrayed. By varying fabric colors and textures, immaculately dressed bodies come alive and appear to dialogue, while exuding self-confidence. Butler’s finished pieces are delectable and lessons in how to juxtapose tessellated color, like the celebrated Bauhaus instructor Johannes Itten (1888-1967).

‘I Know Why the Caged Bird Sings, 2019’, shows four late-Nineteenth Century African-American Southern women conversing. Butler used a photograph of Atlanta University students, 1899-1900, pioneers in getting graduate degrees. Their self-assurance is underscored by this work’s title taken from Maya Angelo’s classic 1969 book, which addresses courage and survival. Like Sargent’s painting of Mrs. Phelps Stokes, 1897 (Metropolitan Museum), Butler’s women are dressed in garb that hints of masculinity, suggesting the emerging modern woman. As my grandmother, of that period, remarked, ‘a touch of the masculine is very becoming’.

‘Dear Mama, 2019’, shows a mom and young daughter stylishly dressed, coifed and at loggerheads over triviality.  Butler has embroidered the background cloth with a repeating pattern of verbiage about a mother’s love and appreciation of her daughter, in spite of a momentary meltdown. Butler’s colored swatches vibrate towards their complements as the two jousting bodies, engaged in stubbornness, pop from their contrasting background.  Recycling material to make new art is great for supporting Climate Change too.

The artist James McElhinney is a visual raconteur: artist, and oral historian.  His mini-tome ‘Sketchbook Traveler’ is a backpack-able, 5x7 inch, art book that explodes with information. McElhinney’s message: there is a relationship between writing and drawing. The key is to forget longing to be a Leonardo or a Hemingway—throw caution, have fun. McElhinney regales, “Drawing is just a form of writing that employs a visual language (Mc11).” By developing the art of curiosity, and looking from ordinary to breathtaking, you’ll stretch your capabilities. McElhinney insists travel can be real or in the imagination, a useful tool in the age of Coronavirus, when most of us have prudently chosen to stay home.

‘Sketchbook Traveler’ begins by enticing readers to write and/or sketch as did past journalists: William Clark, Alexander von Humboldt, and Hokusai.  McElhinney writes, “Take your time. Drawing is a slow art, a form of meditation, a way to graduate from looking to seeing….Drawings are just collections of straight lines and curved lines—movements and measurements filling the page (Mc 13).” McElhinney resides in New York’s Champlain Valley and is an expert on the Hudson River, which begins in New York’s Adirondacks and meanders 315 miles into New York Harbor. The river is a metaphor for the American experience, as it has witnessed Colonial warfare, Indigenous persecutions, and the Industrial Revolution with its excess river traffic that caused uber-pollution. Folksinger Pete Seeger, with his sloop Clearwater, became an early crusader for restoring the Hudson.

Sketching the great outdoors can be daunting. Unlike indoor studio space, boundaries are endless—where to begin?  McElhinney invites would be and seasoned draftsmen to experience how he approaches an outdoor composition. A close look reveals he draws with a red pen then fills in the countryside with a limited palette: red, yellow and blue. He has no qualms about writing notes all over sketches either.  Having traversed the Hudson’s banks, McElhinney realistically drafts  the granite, shale and limestone that jut out in specific points along the river. Large vertical slabs of basalt resembling a stake-wall of Hershey bars can be viewed from Manhattan’s Hudson banks, forming New Jersey’s Palisades. His book discusses nature conservancies, walking and biking trails that now parallel the river, allowing residents and tourists to embark on alternate ways to vacation beyond the many museums unique to Gotham. McElhinney instructs readers how to pack lightly, dress sensibly, and be environmentally respectful.  As these Hudson area suggestions can be applied to hiking in the Rockies or in Alaska, it is good to do homework and know dangers: wild animals pop-out, steep terrain can be slippery, and cold/ hot temperatures can shift. McElhinney writes, “The mission of the sketchbook traveler is to devote as much time to engaging with their surroundings, not struggling with bulky box easels, umbrellas, and any gear other than  a small messenger bag, or multi-pocket travel vest (Mc 114).”

‘The Jersey Palisades from Below the Cloisters’ is a good illustration of ordinary spaces disclosing a myriad or textures and angles. Fabricated rock wall contrasts with the natural stone.  Trees along the river banks frame the mercurial Hudson, calm in this picture. Unkempt foliated trees oppose weathered wooden benches, inviting onlookers to metaphorically sit and absorb a view that has captivated artists, specifically the late-Nineteenth Century Ashcan school.

‘Lower Cataract, Kaaterskill Creek’is an example of using one color (red) and relying on  a variety of heavy to light lines, going in a multitude of directions, to focus viewers on the falling water, craggy rocks and spindly trees. Kaaterskill Falls is situated in the Eastern Catskill Mountains and continues to attract the curious. A modern day Thomas Cole (1801-1848) McElhinney moves beyond Nineteenth Century American Romanticism, with its tropes of Manifest Destiny, and presents landscape as something to be protected in light of Climate Change.  You might surmise McElhinney depicts vacancy, like Edward Hopper (1882-1967) but his watercolors don’t appear melancholy, just keenly observational.

Whether you’re a beginner or need to jump-start your abilities, McElhinney and Butler not only fuel creativity, they become uplifting in these uncertain times.

`Mine Sleuth: ‘Bisa Butler Portraits’ Ed. by Erica Warren and ‘Sketchbook Traveler’ by James Lancel McElhinney are available on Amazon.

Jean Bundy is the Climate Change Envoy for AICA International