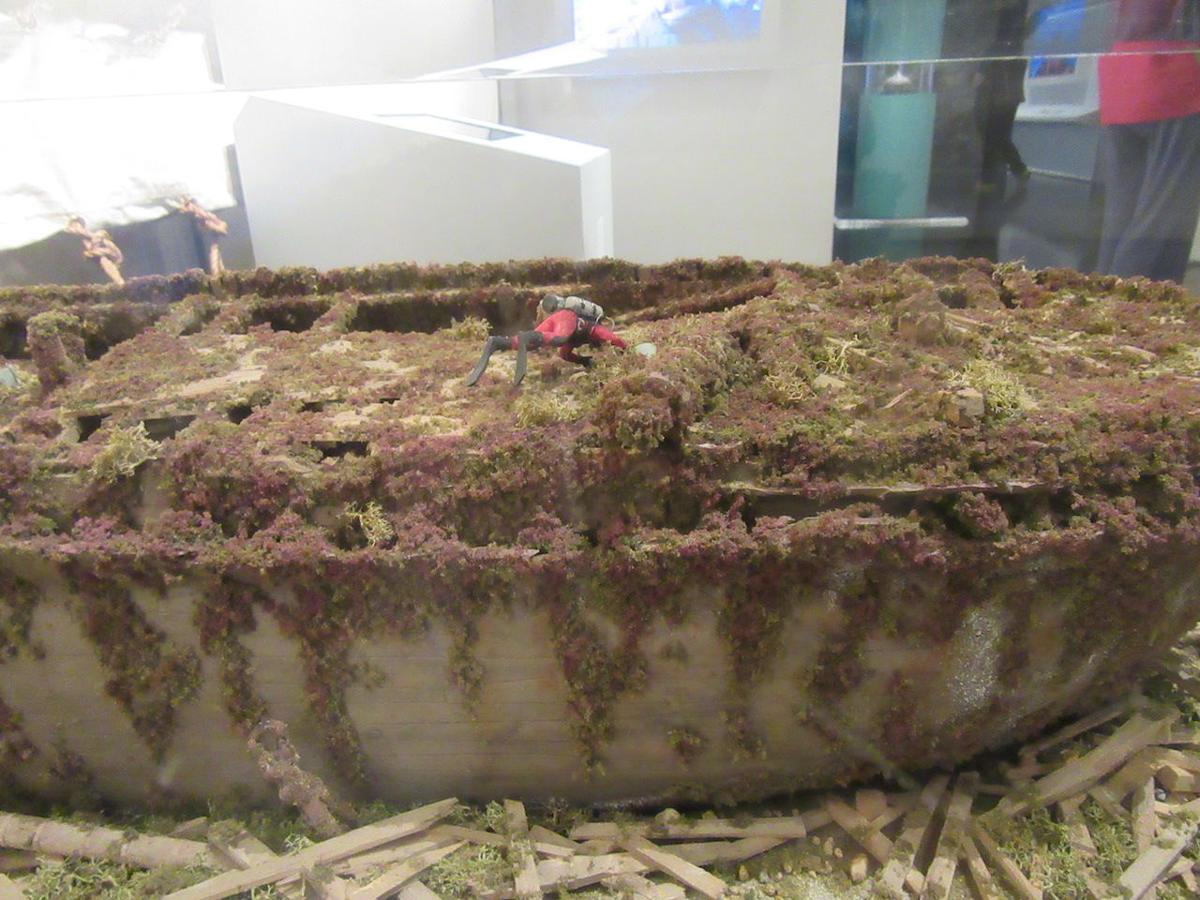 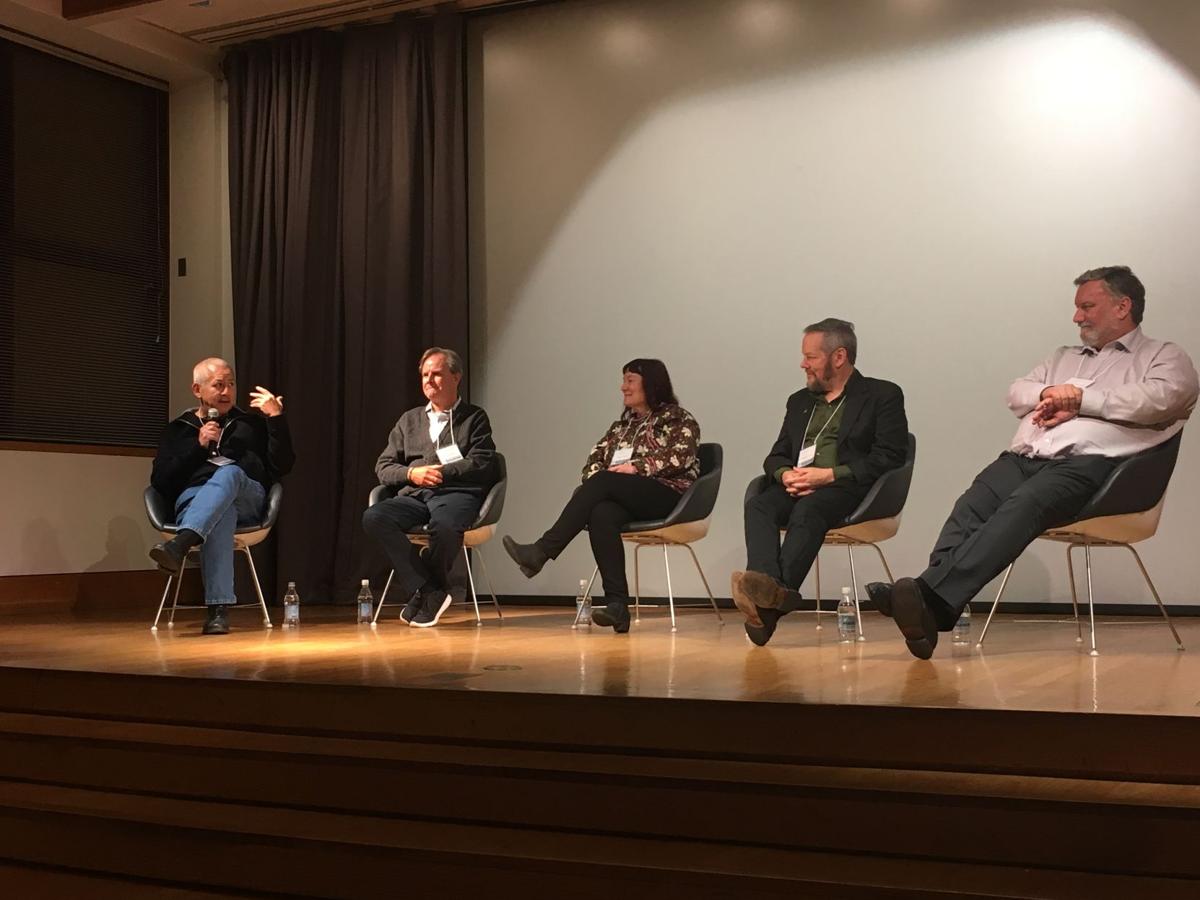 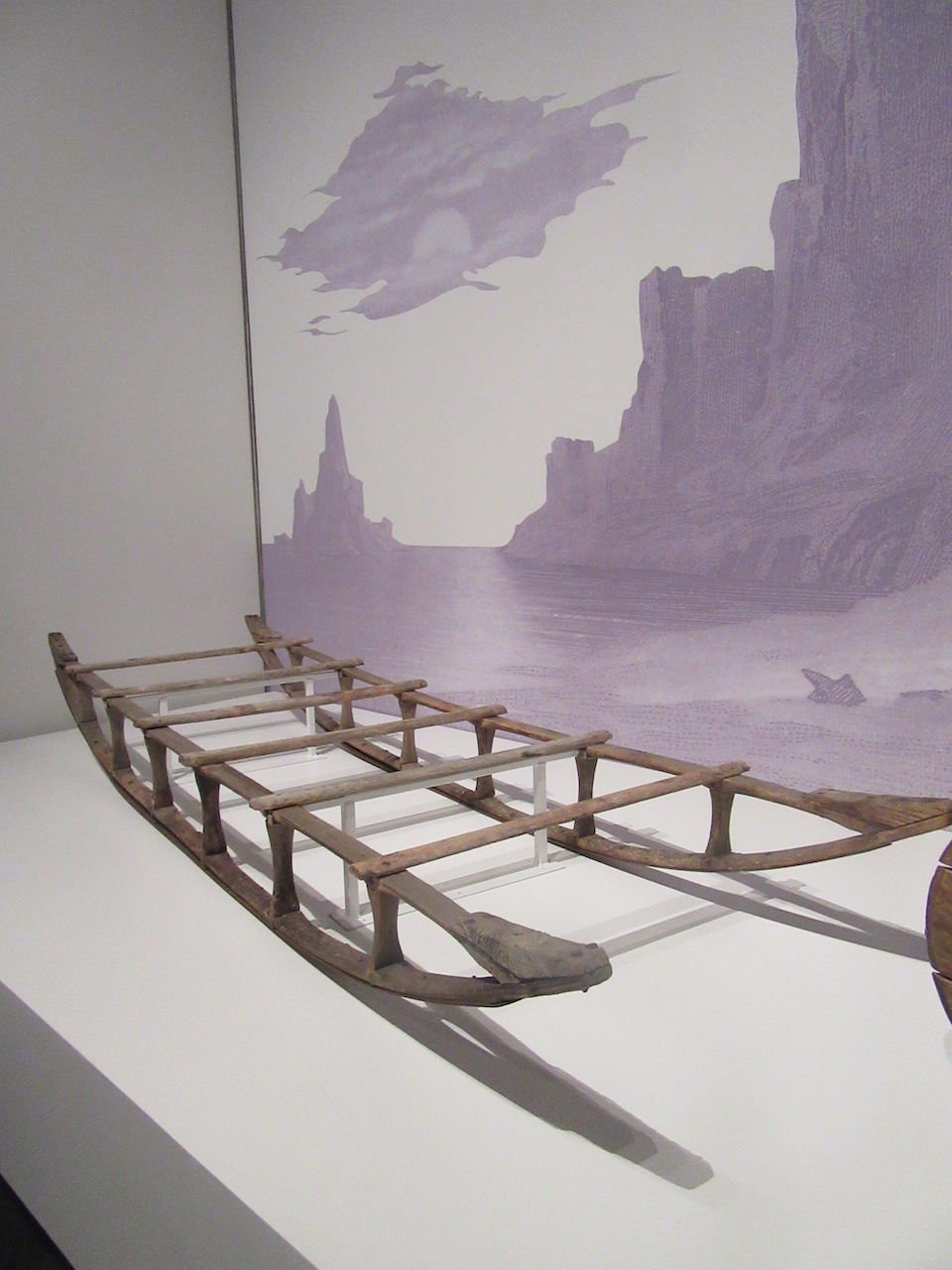 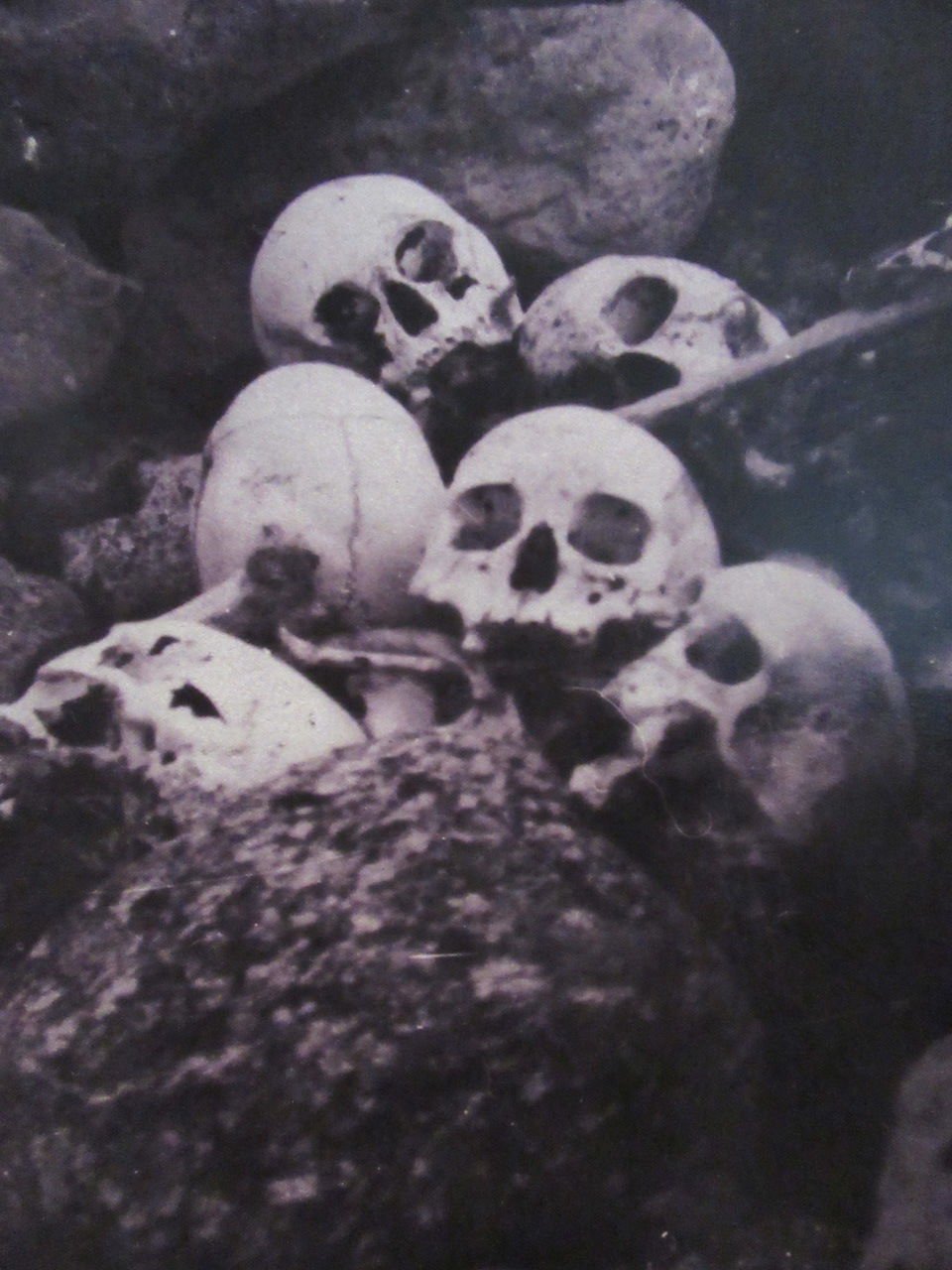 By David A. James This summer the traveling exhibition “Death in the Ice” has been featured at the Anchorage Museum. The exhibit explores the fate of the Franklin Expedition, which set off from England in 1845 to find the fabled Northwest Passage, a route from Europe to Asia over the top of Canada, and vanished. Two ships and 129 men were lost. The only written evidence of what happened was a not left in a cairn on Victory Point on the northwest corner of King William Island dated 1848 which said the expedition’s commander, Sir John Franklin, had died, the ships were hopelessly locked in the ice, and 105 survivors were abandoning their ships and heading for Hudson Bay. Reports from Inuit in the region spoke of starvation and cannibalism among the crew. Some skeletal remains confirmed this, but for over a century-and-a-half, little more was learned. Then, in 2014, the wreck of the command vessel, the Erebus, was found in Queen Maud Gulf, far to the south of where the note said the ships were abandoned. Two years later, the Terror was found, ironically enough, in Terror Bay, on King William Island’s southwestern flank. For more than 150 years it had been assumed by Europeans that the ships would be found near Victory Point. Instead they were located where Inuit at the time of the calamity said they had succumbed to Arctic waters, the places where subsequent oral Inuit history always claimed they could be found. Suddenly, it seems, the long-accepted story, based on limited physical evidence, has been upended. Assertions long deemed unreliable owing to their source have proven far more accurate than the firm beliefs of learned individuals who insisted that only physical evidence could be trusted. History is being rewritten before our eyes. •••

The fact that oral history has proven to be the best source of knowledge about the Franklin Expedition was a predominant theme at a symposium held at the museum on Sept. 21. Five individuals with extensive knowledge on the expedition and the recent discoveries gathered for a well-attended discussion of what the recent discoveries of the shipwrecks have told us, and what new questions arise as a result of the findings. The most important lesson, said Canadian author David Woodman, is that “Oral history has a powerful role to play to correct and augment the history that’s been handed down to us.” Woodman was the first speaker to take the stage. Long obsessed with the finding the wrecks, Woodman was one of the few to dig deep into oral testimony offered to American searchers Charles Francis Hall and Frederick Schwatka, each of whom traveled to the region of the calamity independently in the latter 19th century. Both interviewed local Inuit at length, gathering accounts of what befell the men. While the stories Hall heard were secondhand, Schwatka met with Inuit who claimed to have seen the Erebus in Queen Maud Gulf with smoke rising from its stack, and human and dog footprints leading away from it in the ice and snow it was bound into. They also said that upon boarding the ship, they had found a body. Woodman, who long ago contracted a chronic case of Franklin Fever, decided that these stories made more sense than the official account of what transpired. During the 1990s he made repeated trips north hoping to locate at least one of the ships. And while he was unsuccessful, he was looking in the right area. Not far from where he scoured the sea bottom, the Erebus was discovered through serendipitous chance in 2014 (it was only because sea ice off the the northwest coast of King William Island failed to go out that year that Parks Canada teams, by then aggressively looking for the ships, found the Erebus after a piece from it was accidentally spotted on an island near where it rests). Woodman explained that his approach to the search, which differed dramatically from what had long been the norm for those seeking answers was to trust what was seen rather than letting the physical evidence drive the narrative. “I use the relics to verify the stories,” he said. “I don’t use the stories to verify the relics.”

Putting faith in what the Inuit claimed both at the time and ever since makes sense, according to Utqiaġvik-based anthropologist Anne Jensen, who followed Woodman on the stage. While much of her talk focused on diggings she has been involved with and the historical knowledge gained from what has been found, she stressed that traditionally for the Native peoples of the Arctic, accurate knowledge of their surroundings was a matter of life and death. “Community survival, perhaps your family’s survival, depended on knowing where things were,” she said. Thus she’s not surprised that the people interviewed in the 1860s and 1870s had precise information on the locations of the ships, even if British explorers in particular dismissed the information they offered. Personal perspectives on oral histories, as well as myths and legends, was offered by the next speaker, Paul Ongtooguk, Director of Alaska Native Studies at University of Alaska Anchorage, and a master at storytelling. Ongtooguk told the audience of the Inupiat tradition of telling children bedtime stories that could be quite frightening. When he was young, he explained, he would be told tales that could raise the hairs on his back. He shared several stories, including one about a distant tribe of men who were rich in metals (immeasurably valuable to Inuit for their multiple uses). Some of the men turned to cannibalism in this story, while others died. A few survivors had joined local Inuit groups. Years later as an adult, Ongtooguk said, he learned of the Franklin Expedition and had an epiphany. “That’s the scary story.” It fits. Some Inuit oral history accounts, while unconfirmed, claim a few of Franklins men assimilated into Native society, a tantalizing possibility. Paul Watson, a Pulitzer Prize winning journalist, and author of “Ice Ghosts,” a history of the search for Franklin, was the fourth speaker. He pointed out that the Inuit name for the island in Queen Maud Gulf where the piece of the Erebus was found is “Where it Sank,” clear evidence that they knew what they were talking about.

Watson also expanded on the day’s other major theme: it begs imagination that the ships could have reached their final resting places via the currents and sea ice currents. Had they simply drifted from where they were abandoned in 1848, the Terror would have had to have taken a sharp u-turn into Terror Bay, while the Erebus would have needed to thread its way through a maze of small islands without running aground. What appears increasingly likely is that some of the final survivors remanned the ships at some unknown point and attempted an escape. Pointing to the location where the Erebus sank, Watson declared, “That looks to me like people were navigating, trying to find their way out.” This points back to what Hall and Schwatka were told, and this was the subject of taken up by Russell Potter, the day’s final speaker. A professor of English at Rhode Island College, Potter is widely regarded as one of the premier experts on the Franklin Expedition. In his presentation, Potter stressed the contributions by American searchers, who bucked the British approach and relied on the Inuit accounts rather than the relics. With the evidence increasingly confirming this testimony, Potter said it was time to recognize both Inuit knowledge and the efforts of Hall and Schwatka in obtaining it. The story of the Franklin Expedition has become huge in Canada since the discoveries, Potter noted. And he hopes in the US it will catch fire as well, because, he said, “The American role in the search is a very powerful one.” ••• Much more was discussed in the symposium. In response to the long running accusations of hubris that have been hurled at the expedition, Sir John Franklin’s kindness of character was pointed out. The impacts of climate change on modern Inuit life was highlighted. Attendees were reminded of the humanity of the lost men (a point poignantly shown by a slide photo of a pair of handmade gloves that a sailor had left behind; they had hearts woven into them). In response to a question about why men would have volunteered for such a hazardous venture, it was pointed out that prior to the Franklin disaster, there had been relatively few fatalities during British missions into the Arctic. For naval men of the time, the tropics presented a far greater risk of death. But in the end, what draws people to Franklin, what drives an obsession that has lasted seven decades, is the mystery of what ultimately happened. Far from solving it, the discovery of the shipwrecks has merely fueled ever more intense speculation. It was Woodman who summarized it best. “Everything they find raises as many questions as answers,” he said. “But it’s all thrilling.”