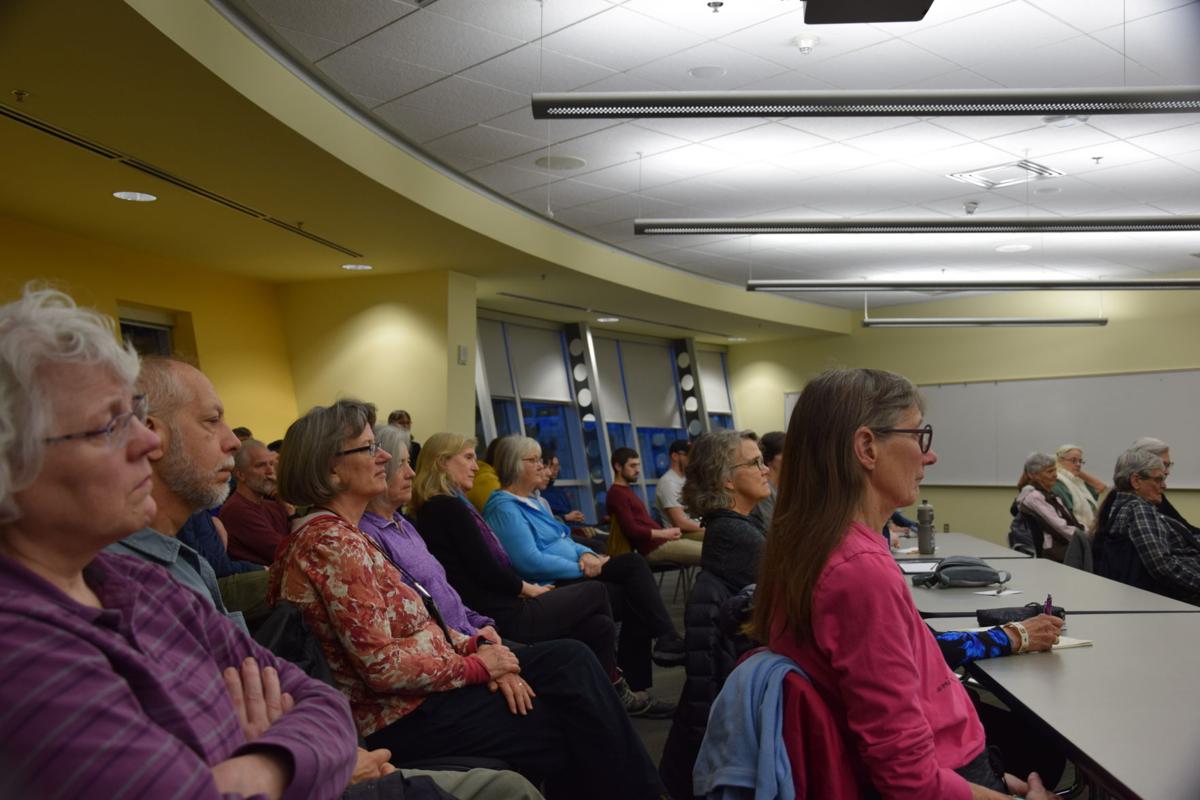 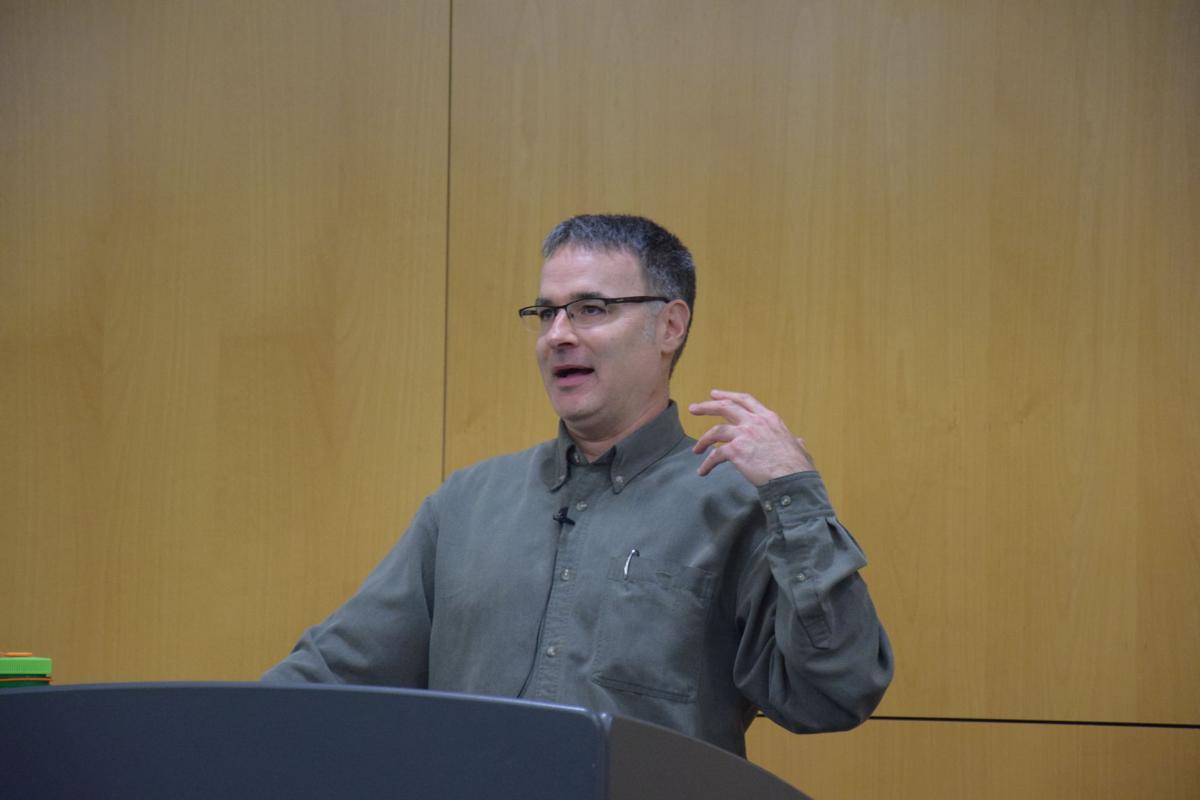 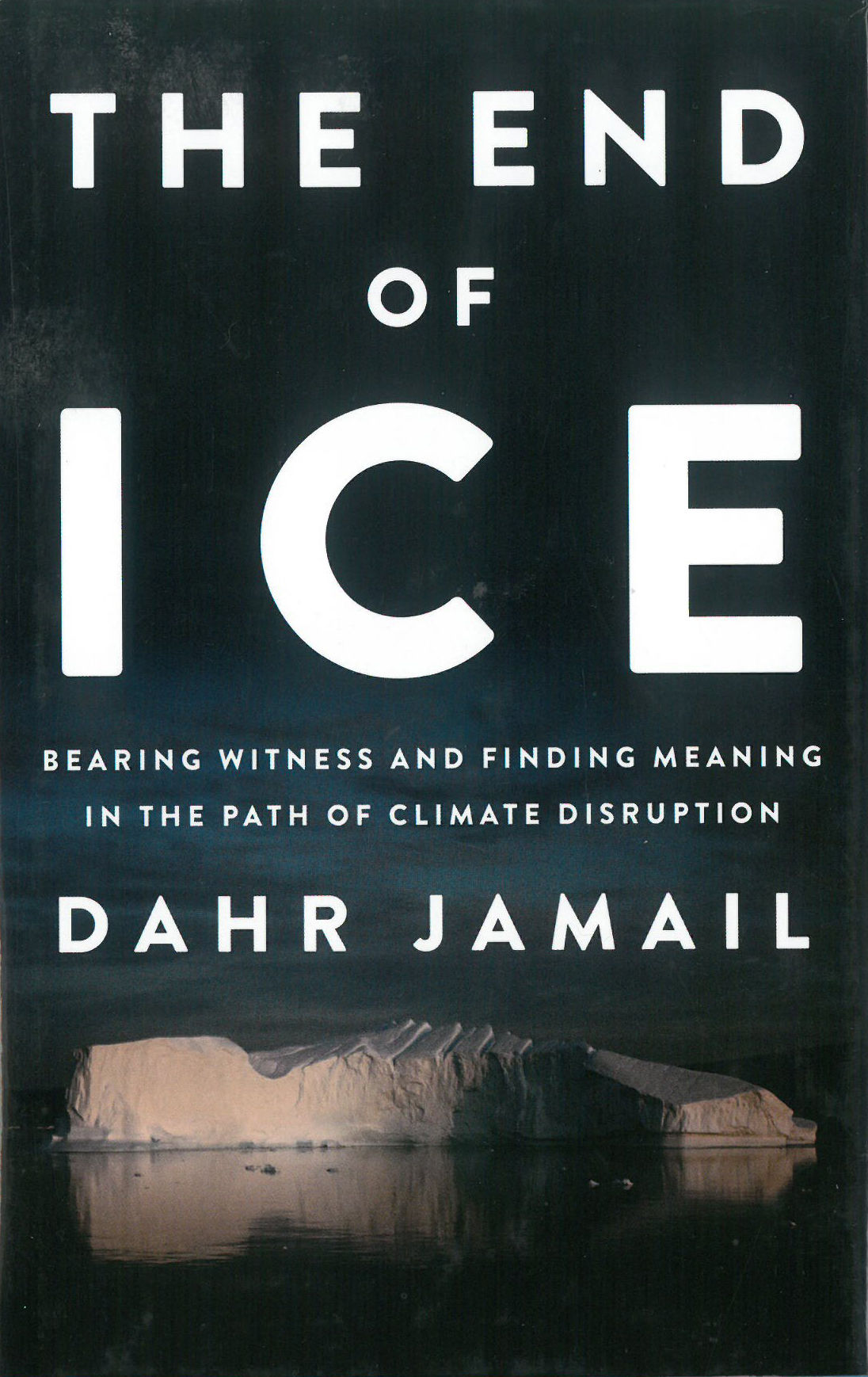 In a large classroom on the third floor of UAA/APU’s Consortium Library, a small group of Anchorage citizens gathered to hear Dahr Jamail hawk his acclaimed book, ‘The End of Ice’, reportage about the state of the planet. While a few students wandered in and abruptly out, appearing not to care about the topic, attendees (majority over 60 yrs.) puzzled over Jamail’s motto, “Mountains are where I go to listen to the Earth (Jamail 18).” It was mid-November with outside temperatures a balmy 48° F. Most in the audience had lived in Alaska over fifty years, and remembered late autumn to be snowy, in the low twenties. When Jamail concluded his talk, several listeners chastised him for dismissing any hope for the Earth to recover. Others conceded that motivating by fear has been proven unsuccessful. Jamail, unnerved by cross-examination, segued about going to a Washington State high school where he lectured teens to think outside the box, even to the point of avoiding college. Another audience member responded by referencing Amish who pollute less by living a more subsistence lifestyle. Another mentioned out-of-control homelessness and riffed that maybe their lifestyle didn’t waste resources the way those who live in houses do. Jamail finished by encouraging grassroots approaches, as governments worldwide are in denial.

Briefly ‘The End of Ice’

Jamail’s book starts with a concise introduction, fingertip references, along with a short narrative about being rescued, by climbing colleagues, from a crevasse. He’s an avid mountaineer, where working together is vital for survival, which could be a metaphor for all joining-in to clean up the Earth. Jamail begins, “The heat-trapping nature of carbon dioxide (CO2) and methane, both greenhouse gases, has been scientific facts for decades, and according to NASA, ‘There is no question that increased levels of greenhouse gases must cause the earth to warm in response (Jamail 4)’.” This is Global Warming 101: result of increasing temperatures, droughts, wildfires, along with hurricanes, coastal flooding and permafrost melt. Jamail remarks, “Alaska’s glaciers are losing an estimated 75 billion tons of ice every year (Jamail 35).” Next he takes readers to the Pribilofs where decreasing oceanic food supplies due to warmer water temperatures which also encourage shellfish poisoning mean, “Thousands of common murres are dying of starvation (Jamail 61).”

Jamail then reports from the Rock Islands of Palau where death of coral beds (coral bleaching) is another indication of Climate Change. According to University of Hawaii marine biologist, Dr. Mark Hixon, “The situation is dire, but not hopeless…there are already corals living today that have adapted to warm, acidic waters that will be typical of future oceans (Jamail 80).”

Trees, which store water and absorb atmospheric poisons, are also reacting to warmer temperatures, droughts, deforestation, fungus and beetles. According to Dr. David Peterson, US Forest Service biologist at the Pacific Northwest Research Station, “we have time before things go completely off the rails (Jamail 138-139).” Of note: dead trees release CO2 and thus lose their function as nature’s sponges, becoming polluters (Jamail 146-147).

Everyone knows the Amazon is the largest rainforest in the world with its multitude of rivers, birds, insects, fish, and medicinal plants. According to biologist Dr. Rita Mesquita with INPA, an Amazon research institute, “By 2016, activists were being killed at a rate of nearly four people every single week worldwide. Brazil saw the highest rates, with forty-nine killings, many of them in the Amazon, where timber industry production has been linked to sixteen of these murders as deforestation rates have risen by a staggering 29 percent (Jamail 164, 170-171).”

‘The End of Ice’ concludes in Utqiagvik (Barrow) where Jamail engages with KBRW’s radio announcer/photographer Cindy Shults, who has seen nuthatches and hummingbirds, common to Anchorage, flying near the Chukchi Sea. According to geophysics professor Dr. Vladamir Romanovsky, with the University of Alaska-Fairbanks, “ as the permafrost thaws the land sinks lower, and so for villages near coastal zones, like Utqiagvik and other northern villages across Alaska and Siberia, this will combine with rising sea levels to form a serious threat to their communities (Jamail 190, 192).” Jamail also talked with Elder Richard Taalak, who has witnessed shrinking sea ice without using scientific instrumentation.

‘The End of Ice’ is well researched, but needs several reads to unpack all the information. Interspersing acquired friendships like scuba diving with specialists, made reading the data less dry. Surprisingly, I found the book more positive than Jamail’s UAA discussion. Some experts that fetch up in his book expressed hope, as the Earth has proven to be self-healing throughout its catastrophic history when encountering earthquakes, and volcanic eruptions. And according to Dr. Dan Fagre of USGS’s Northern Rocky Mountain Science Center, “the Earth has a resilient system that has been through much worse than what we’ve caused: ice ages, volcanism, etc. ‘So many of these things will recover.’” However in response to glaciers and forests vanishing, Fagre surmises they will return, “But not in the time frame that includes humans (Jamail 36, 41).” OK, Jamail is the most pessimistic of the bunch writing, “disrespect for nature is leading to our own destruction. By desecrating the biosphere with our own pollution and having caused the Earth’s sixth mass extinction by annihilating species around the planet, we are setting ourselves up for what I believe to will ultimately be our own extinction (Jamail 212).”

‘The End of Ice’ is like a semester in a science class. Ironically, Jamail doesn’t produce a resume anywhere in the book; I would like to know where he went to school and more about how he got into reporting. I also wondered if Jamail’s acute despair about the Earth’s predicaments was jump-started by some personal tragedy he was trying to overcome. In the last chapter he talks about nursing a seriously ill friend, and compares this experience to tending to the welfare of the Earth. Maybe it just boils down to Jamail being spiritually centered when mountain climbing and thus explaining, “These forays into the mountains are my way of being with the Earth in order to remain connected to my sorrow for what is happening as well as to honor her (Jamail 217-218).” I thought of Heidegger’s book, ‘Being and Time’ or his explanation for the best that can be said to verbally describe what it means to be alive and inhabit the Earth.

Climate Change is real and there is a lot that is depressing. For me, the 1964 film, ‘Doctor Strangelove’ with its satirical humor about the Cold War’s potential catastrophic apocalypse, contains visual tropes for reacting to planetary extinction.

Jamail doesn’t attack tourism, industrial polluters, and didn’t blame third world countries for over fishing to feed starving populations. He offered no solutions, which is why the UAA audience appeared at times perplexed. Truism: No one has answers that don’t involve going on a severe planetary diet. So Jamail’s advice to appreciate the environment while it lasts might be the only rational approach. Humanity’s disconnection to the environment becomes a major theme meandering through this book. That is probably why Jamail likes to meditate amid mountains—I get it. He suggests that everyone seek out their way of surviving.

I recommend putting ‘The End of Ice’ on your gift giving list. However, if you give it to teens for high school projects, I strongly suggest that parents (caregivers) read and discuss the theories, to avoid sadness and misconceptions. I am acutely aware that Climate issues are scary to my Dimond High granddaughter, Averyl.

Mini Sleuth: I want to thank UAA’s Rachel Epstein for organizing this book talk after UAA’s gorgeous bookstore was given over to enrollment services, the result of last summer’s mandatory belt tightening. For information on buying textbooks and t-shirts at the smaller bookstore located in the Alaska Airlines Center, phone: 907.786. 4782. Epstein’s sessions allow for exchange of ideas, vital to a healthy community. Email Epstein to be put on her list-serve: repstein2@ alaska.edu.