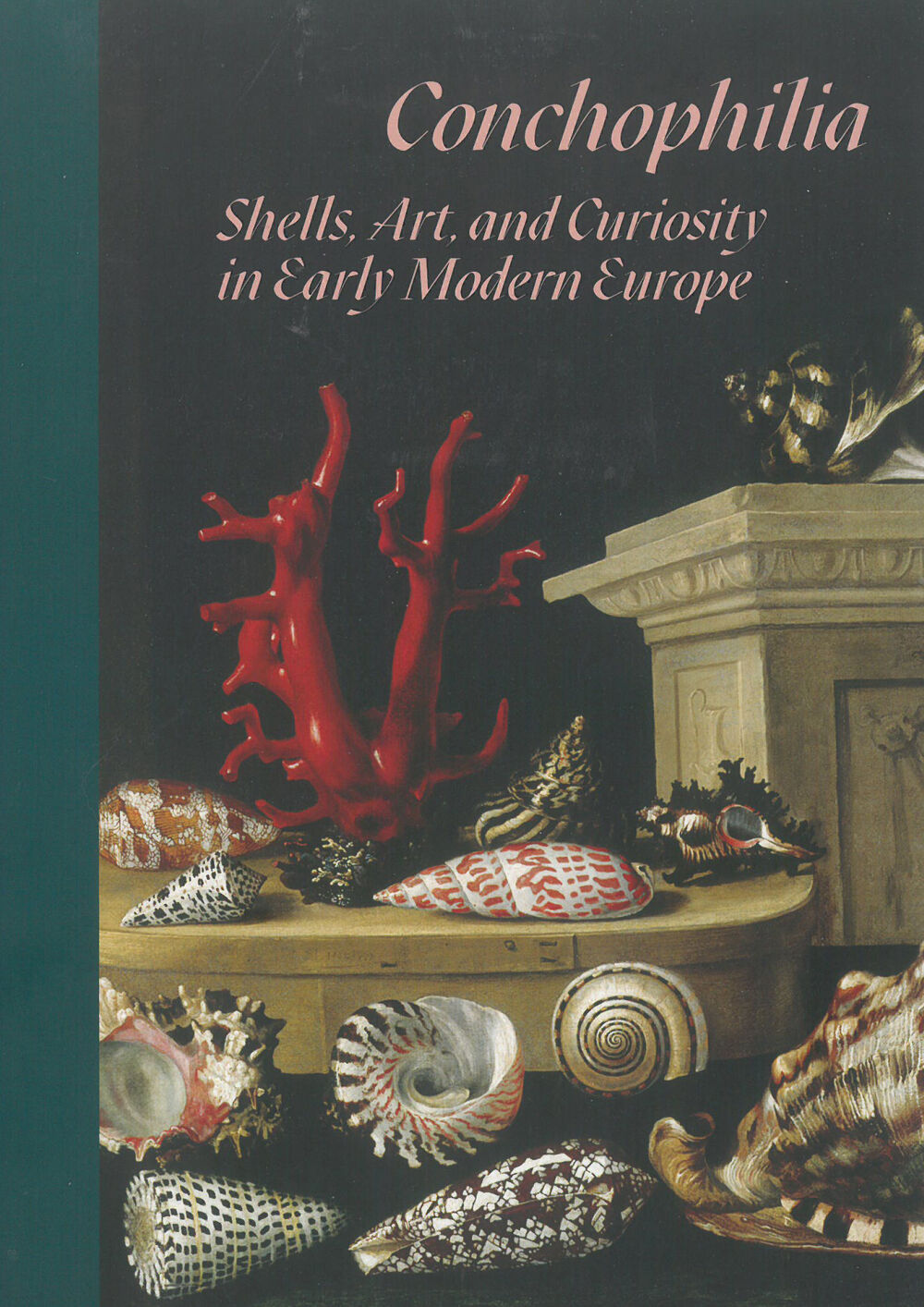 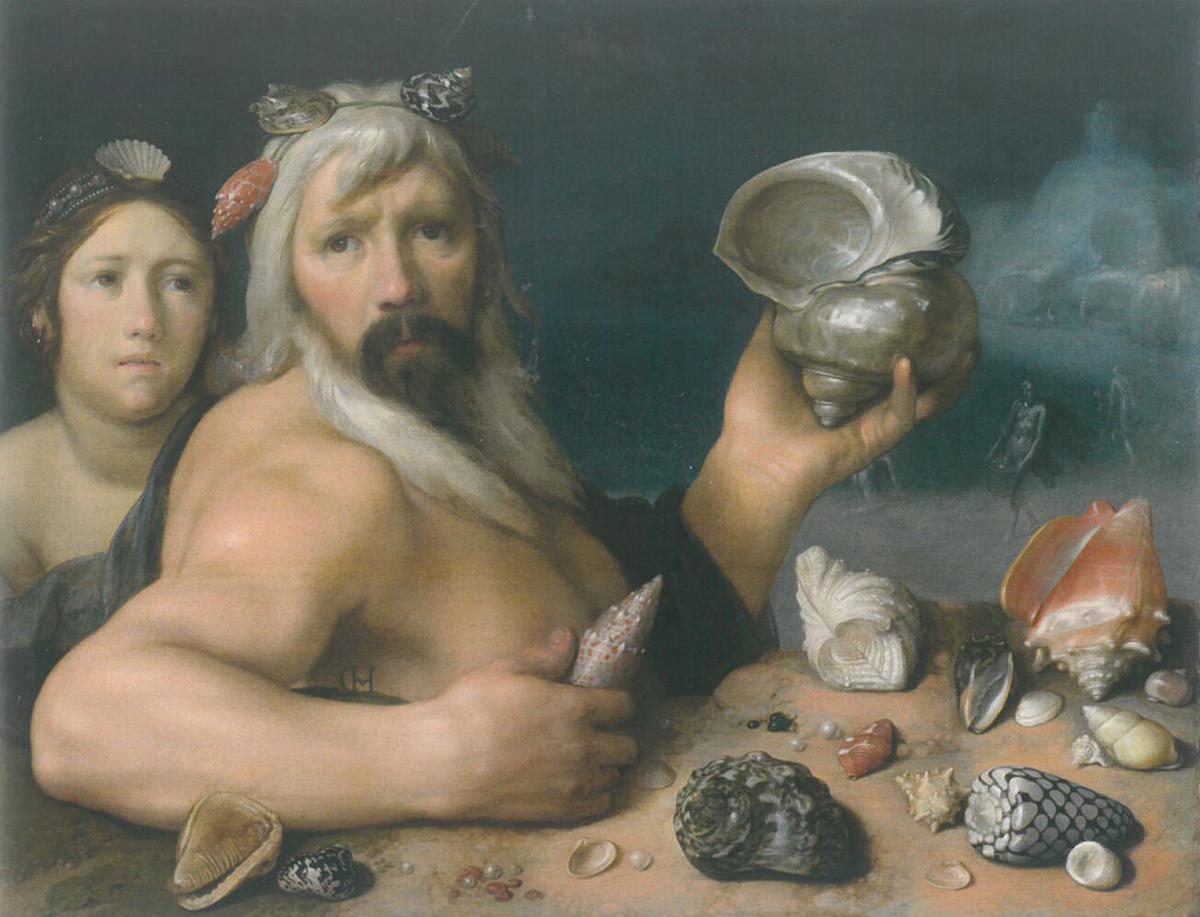 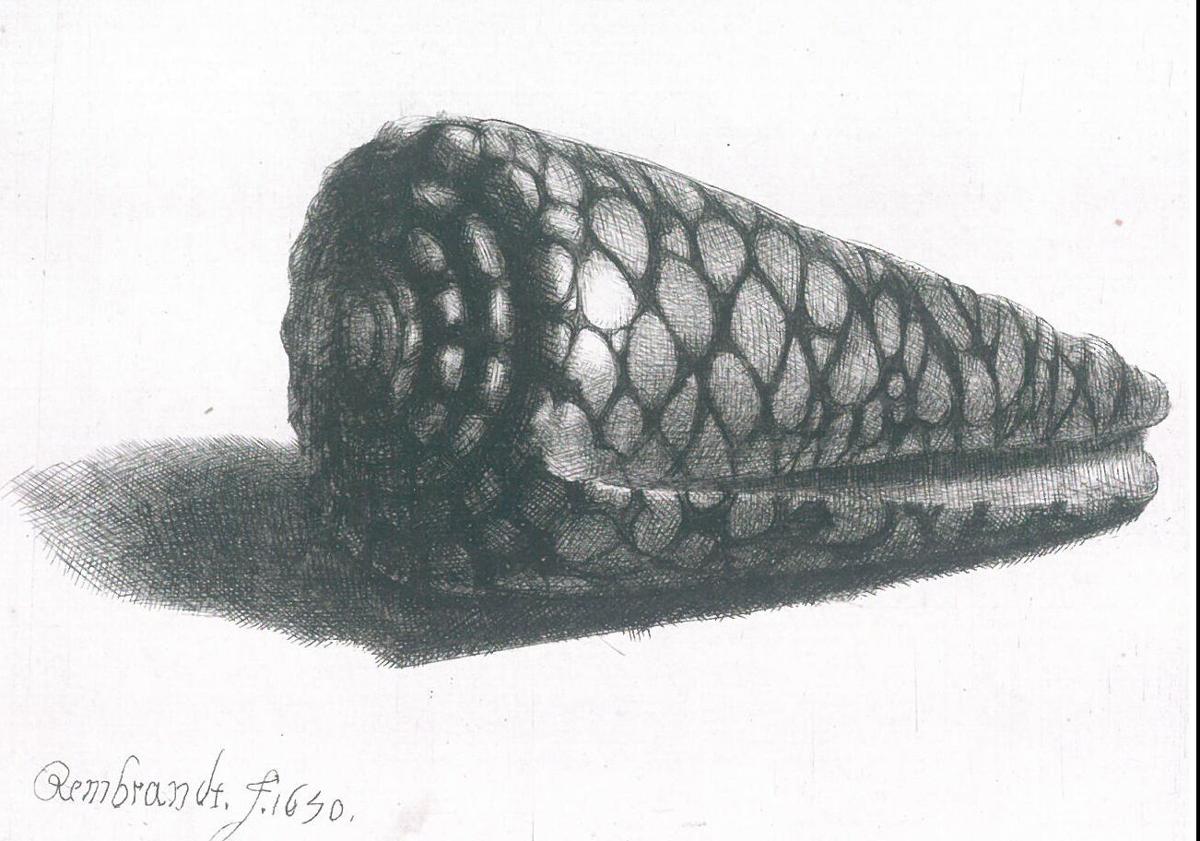 The Shell by Rembrandt 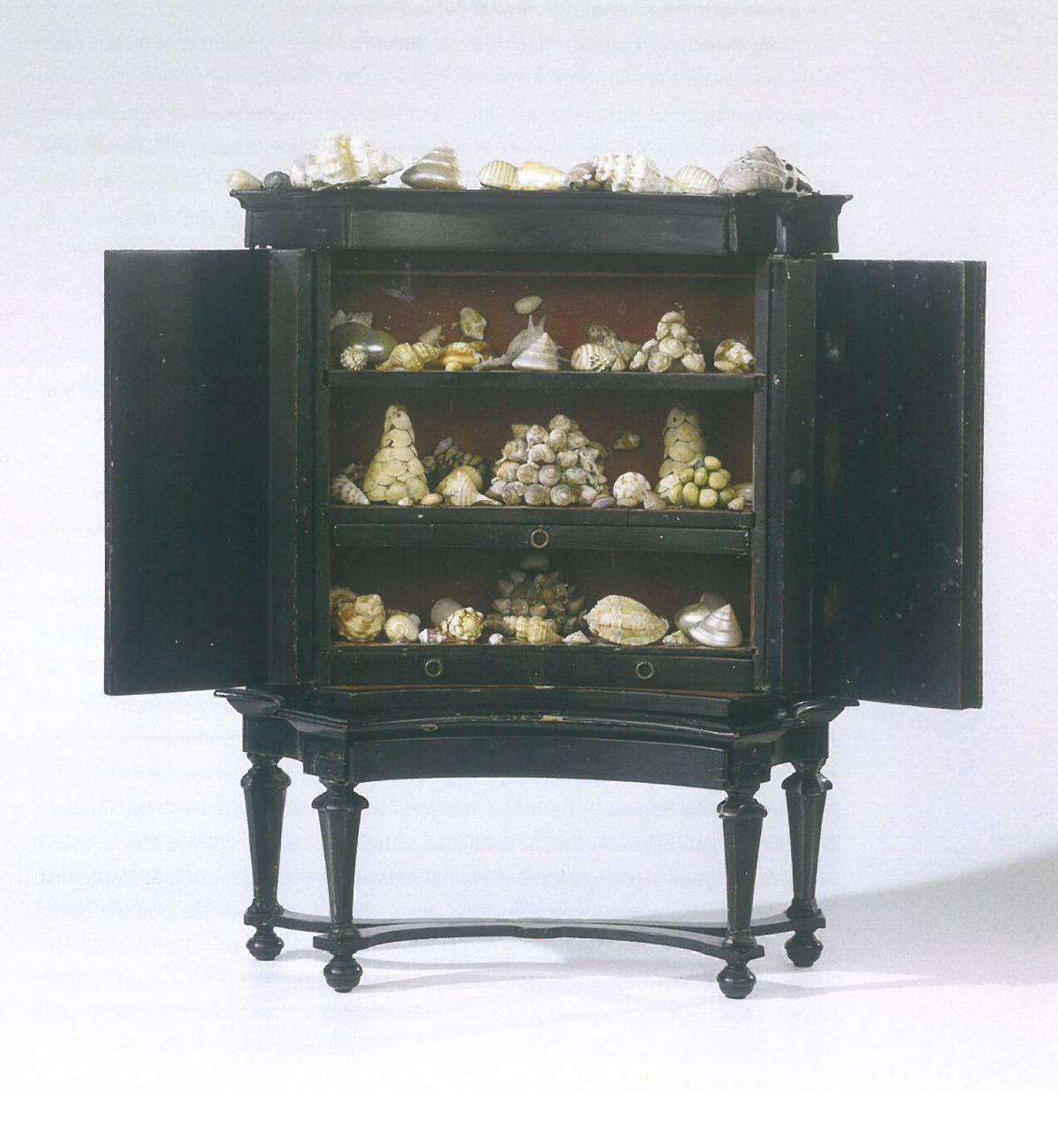 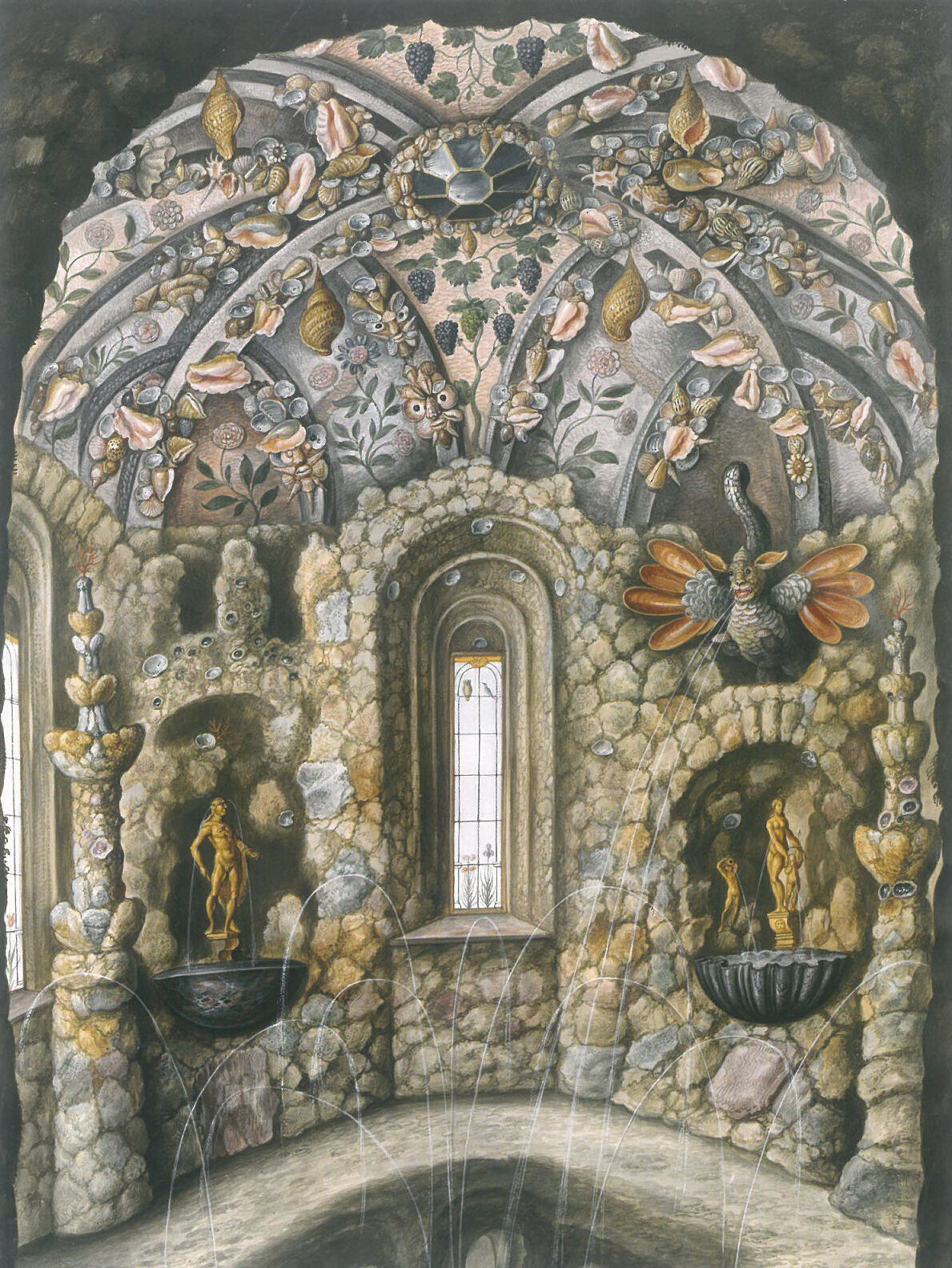 Holidays are for rediscovering dusty boxes filled with ornaments or thumbing through threadbare cookbooks for that recipe, which has alternative ingredients penned into a buttery-stained margin. Contemporary mortals are not the first to go nuts hoarding weird stuff. Shell collecting actually goes back to the Middle Stone Age (3). The book: ‘Conchophilia, Shells, Art, and Curiosity in Early Modern Europe’ is about collecting shells circa the Seventeenth Century. Marisa Anne Bass writes, “Shells in Greek antiquity were often presented as votive offerings to the goddess Aphrodite-Arsinoe—protectress of seafarers (98).” Bivalves became prized for their beauty, mystery and like objets d’art on the auction block today, increased in value for irrationalities of desire and greed.  By the mid-Seventeenth century ornamental shells grew in abundance and affordability for the middle-class to acquire (162).  Stephanie S. Dickey imparts, “By the later eighteenth century, as methods of harvesting, preparation, and transport became more regular and specimens more widely available, the bottom fell out of the market (169).” Who knew—shells were speculated like tulip bulbs!

Anne Goldgar writes, “Shells are things that were once inhabited by creaturely life, that once belonged to an ecosystem distant from humankind before finding their way into artist’s studios, or the drawers of a collector’s cabinets (4).” Seventeenth Century Dutch East India and West India Companies brought shells to Europe, thanks to the enslavement of Native populations, who routinely perished in the procurement process (3, 5, 6). It is not surprising that, “the early modern fervor for shells as prized possessions from foreign lands was founded on a long history of trade and, ultimately, imperial and colonial exploitation (3).” It’s ironic that shells were believed to reflect upon, “the magnificence and almightiness of the great Creator of the Universe (9).”

Contemporary children collect shells on beaches, and later apply clear nail polish to bring out colorations. In the Seventeenth Century, shell cleaning and polishing was serious business. Either performed by Indigenous or by European professionals; bivalve inhabitants were first scraped out-alive or dead. Shells were then stripped of outer layers, polished and sometimes etched with ‘pastoral or mythological’ narratives. One way of processing was to fill cavities with wax. Shells were then bathed in human urine, quicklime, and salt. After a bath in fresh water, they were submerged in nitric acid before polishing (6, 10, 25, 142).  As in every commodity driven society, there is fraud. Dickey writes, “Imperfect shells could be restored, overpainted, or otherwise manipulated to mask damage or simulate rare varieties (170).”

‘East-Indian Art Cabinet with Miniature Shell Collection ’1686-1710, is a mini-curiosity cabinet containing tiny shells, and is part of Petronella Oortman’s dollhouse. (104). Her petit furniture was a copy of her husband’s full-size curiosity cabinet, which represented his Dutch financial ability and status to collect (107). To have the freedom to play, of course, was a privilege of the prosperous. However, Sara Rothé insists, “we should, in the grown-up world, seek moments that mirror our childhood (118).” It was surmised, aristocratic women invested time in doll houses, as a way to fantasize freedoms absent in their patriarchal world (106).

‘Johann Walther, Interior of Count Johannes, of Nassau’s grotto at Idstein’ 1650-1670, is an early version of a decadent ‘man-cave’.Shells were crafted into floral designs and embedded into grotto walls, either indoors or outside stately homes. Architect, Joseph Furttenbach (1591-1667) wrote that, “‘a grotto should be somewhat gloomy, so that it resembles a wilderness’. Windows were closed off with grilles, with light only entering only through a number of small holes. (148). ”Early Modern Europe was intrigued by the briny deep as a place inhabited not only by sea monsters, but mermaids cavorting with seamen; the allure was transposed into grottoes on land (70).

‘Cornelis Cornelisz van Haarlem, Neptune and Amphitrite’, is oil on panel, imparting a double entendre. Grasskamp hypothesizes, “nature’s urge to create and humans’ wish to procreate were seen as intrinsically related and revealing a shared impulse to generate (64).” Neptune who is the center, not only shows off his shell collection, he highlights in his right hand, a phallic substitute. Indicating desire to copulate with the bewildered Amphitrite at far left, her metaphorical vagina is another ‘wink-wink’ bivalve in Neptune’s left hand.

‘The Shell’ 1650, is an etching, engraving, and drypoint (first state) by Rembrandt, who also owned a curiosity cabinet of shells.  According to Dickey, “Rembrandt’s bid for [painter Jan] Bassé’s conch was the highest recorded price for a single shell in over forty years of Amsterdam’s auctions (161).” In addition to oil paintings displayed in first class museums: Metropolitan and Louvre etc., he also made prints.  Here Rembrandt is cross-hatching for the dark and mid-tones of shell and shadow, adroitly turning this bi-valve-- 3-D.  Sadly, genius Rembrandt was not a money manager; he went bankrupt and lost most of his possessions. Unlike today, bankruptcy was a mega-societal disgrace.

Bass writes, “Every shell implies movement, even when at rest. A vacated shell of a gastropod or bivalve was once a thing put in motion by the creature who lived within it, rode the waves, burrowed into sediment, or scoured the ocean floor. [A] shell’s very contours mark out the stages of its growth and the annals of its making (79).”

‘Conchophilia’ is great gifting. OK: I would have liked more about the enslaved who provided The East India Company with lucrative and salable goods, and more about the massive bivalve plundering, without regard for oceanic conservation. The shell story is about coveting natural beauty, which brings out man’s inhumanity—something to consider in this season of ‘Peace on Earth’.

Jean Bundy is a writer/painter in Anchorage. She is a vice-president of Aica-Int. and shows paintings at Pictor Gallery, NYC.