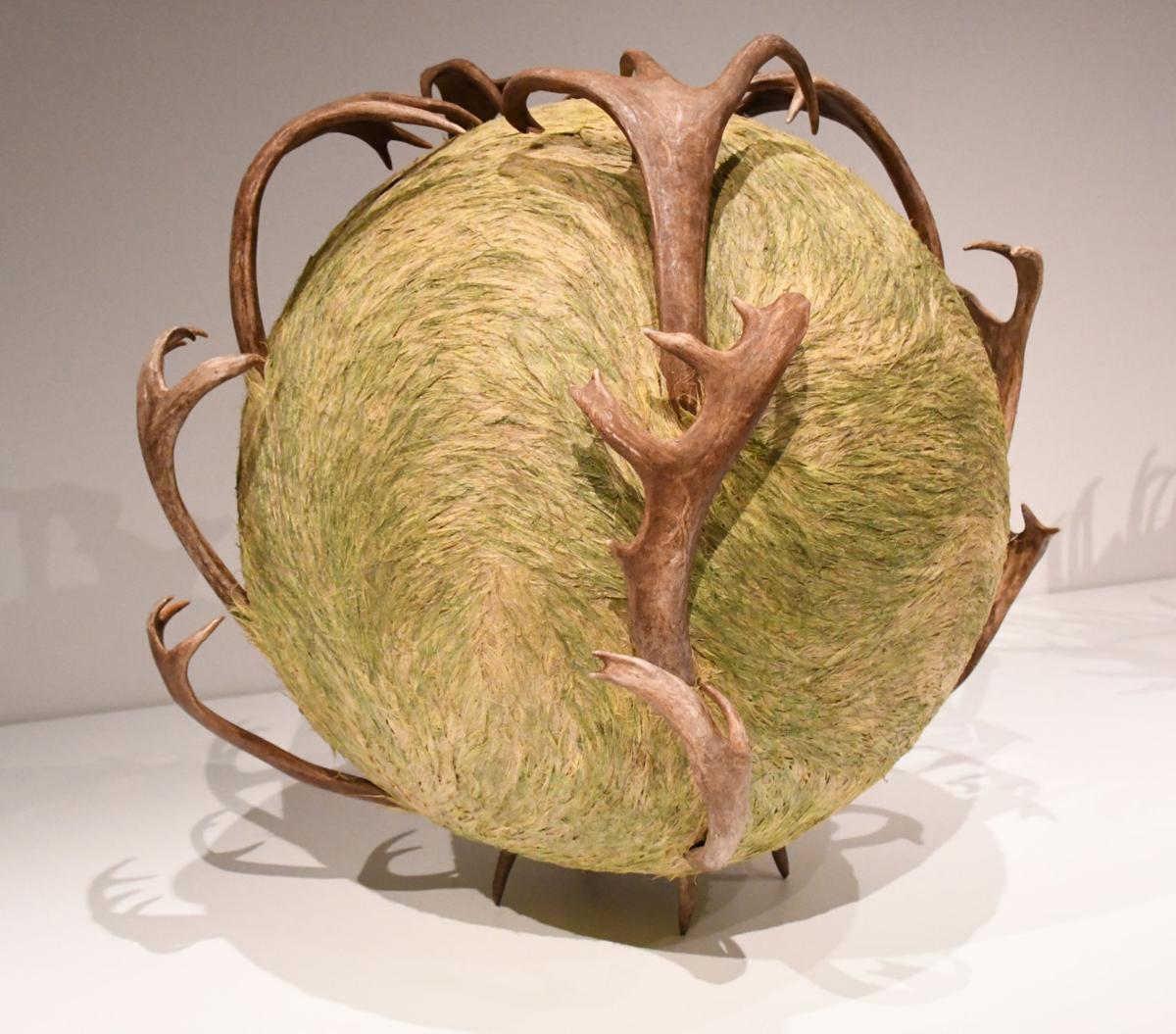 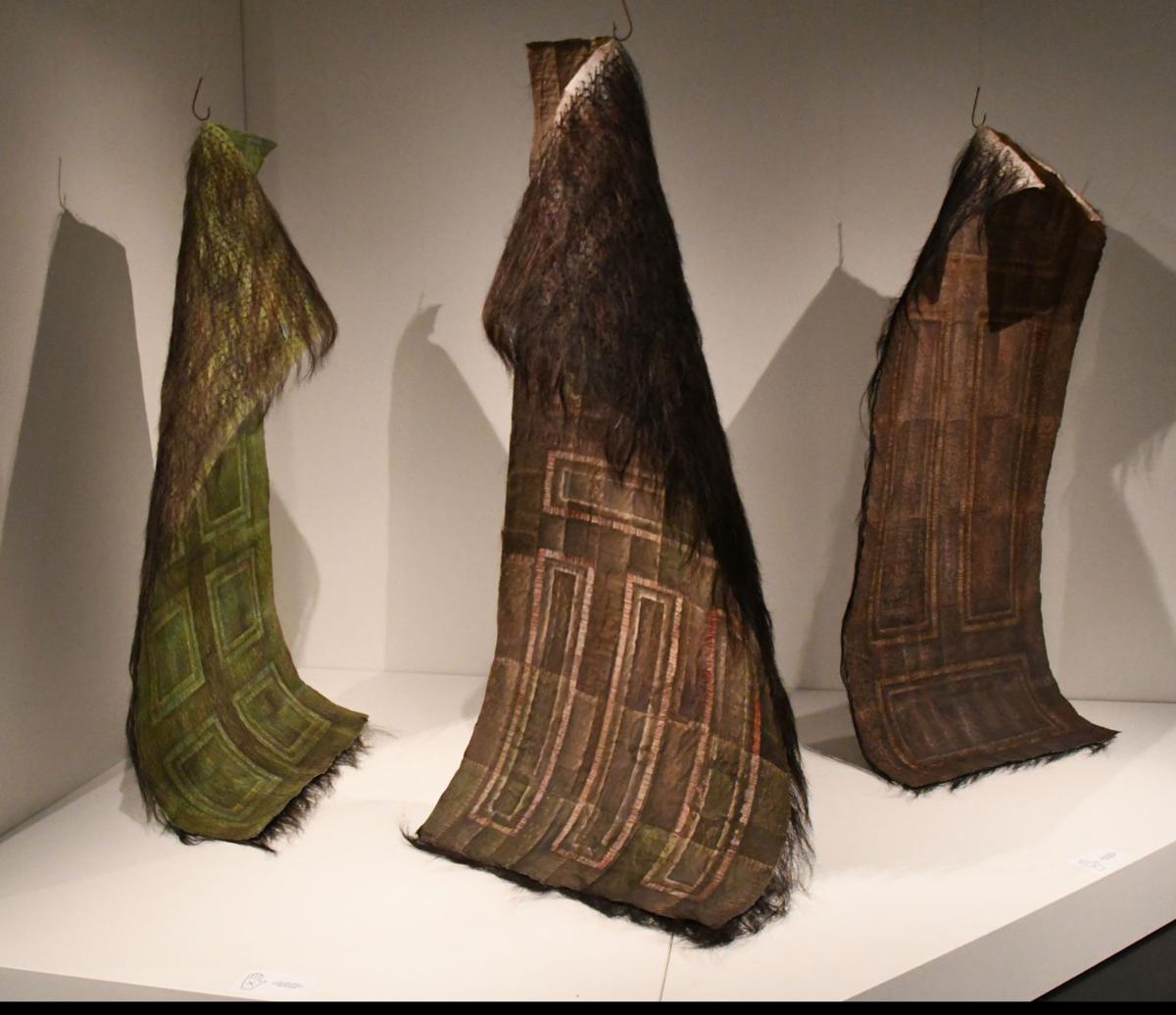 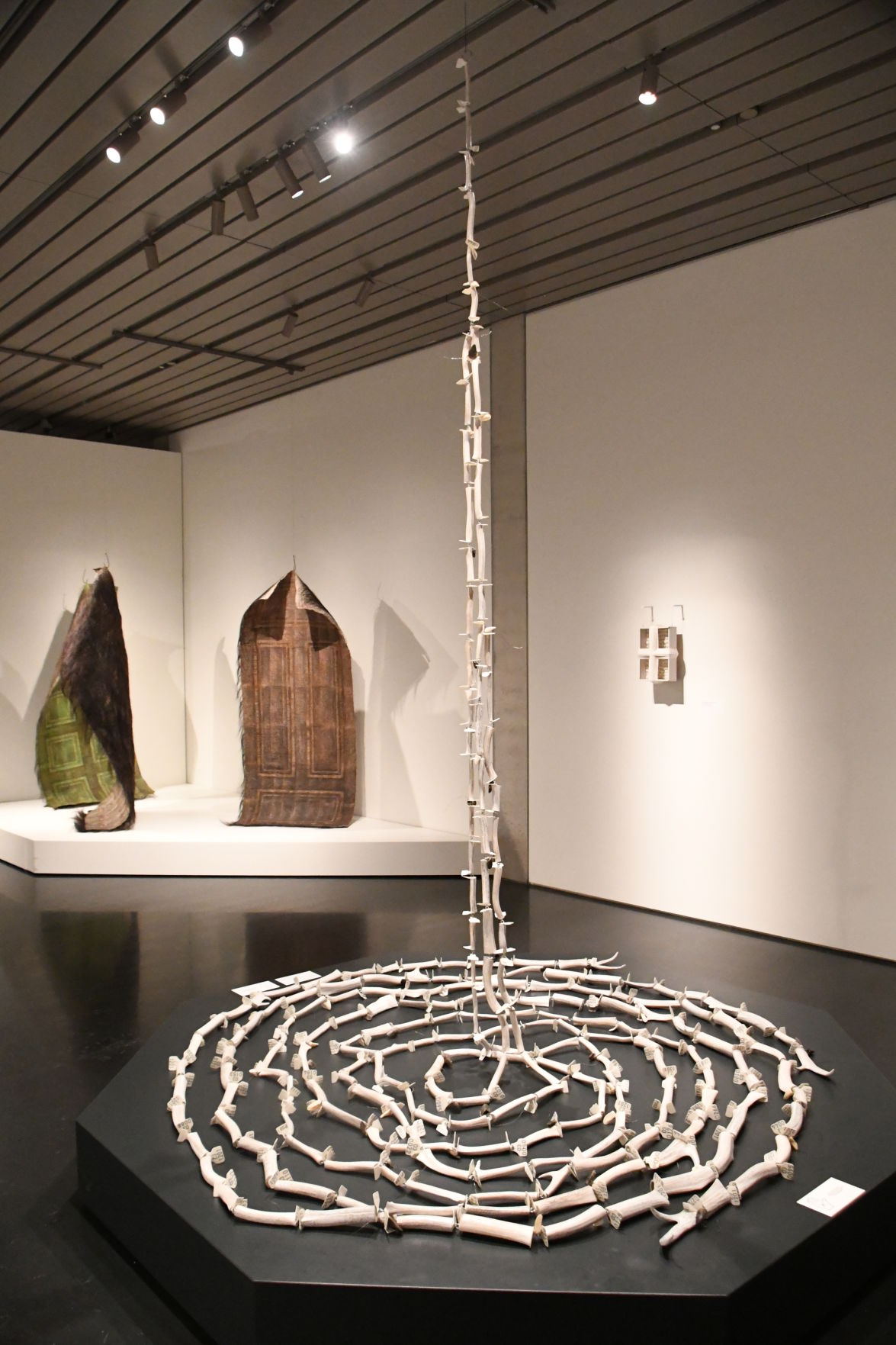 The Anchorage Museum has a strong commitment to acknowledging the art of Alaska’s indigenous people, and recently they have embarked on appreciating all Arctic aboriginal artists, such as Norway’s Aslaug Juliussen. Not only is Northern ancient craft being recognized as fine art, but present-day aboriginal artists, like their ancestors, are recycling animal by-products not only for functional purposes, but for decorative effects, in an effort to bring attention to minimizing waste that contributes to Climate Change.

After studying at Oslo’s National Academy of Craft and Art Industry, Aslaug Juliussen became a textile apprentice to famed Anker Aurdal, who professed that, “modernity always bears signs of the past, assimilating traces of tradition in one form or another (catalog 15).” Juliussen also spent 22 years helping her family herd (eat and wear) reindeer, which provided inspirational art materials along with oral histories from women workers who engaged in “collecting, rinsing, cooking, drying, sorting, and packing (catalog 16).” This uniquely contextualized her projects within the Sámi culture, embedded in the seasonal cycle of reindeer.

Reindeer grazing goes back 18,000 years to an Ice Age and has been evidenced in then-Subarctic China, Spain and England. Skins may be the reason humans endured sub-zero temperatures. The more complex a reindeer’s antlers, the more powerfully they are perceived by the flock. Female reindeer also have antlers and become herd leaders after males have shed theirs. This helps pregnant ones assert themselves and not only dig up food but get de-antlered bucks to help them forage.

Around 800 A.D. Norwegians began ranching reindeer, and castrating them as pack animals. Humans and dogs kept predators away while bonfires dissipated irritating mosquitoes, and tags on ears defined ownership. “Everything they needed they got from the reindeer. The skin is fine, soft, strong and well-suited for making clothing, and only kangaroo skin can measure up to the quality. Reindeer fur makes the world’s warmest winter clothing, boots, thermal matting, and bedding. Antlers and bones were used to make tools and musical instruments, the tendons were used as sewing thread, and the stomach and bladder containers for milk, butter, and cheese. Reindeer meat was used fresh, dried, salted, and smoked. Selected animals carried large packs or pulled sledges that whole families could ride when moving from place to place. The same closeness and comradeship existing between the animals is, for the tame reindeer, transferred to humans. Up to the 1950s, a reindeer’s role as friend and collaborative partner was a matter of course, and the friendship between sledge reindeer and their owners could be as close as that often existing between horses and their drivers (catalog 35, 38, 39).

Reindeer herding continues to be arduous, but the Sámi who pursue it use entire carcasses and pollute little. While I am not going to herd reindeer, I found reading about this subsistence lifestyle not only fascinating, but a metaphor for better living today. Their work habits have a message for us who take for granted Western supermarket shopping or push the ‘Amazon’ computer button.

Juliussen’s work is recognized for its Formal qualities as well as homage to past craftsmen along with her sincere appreciation for animals who continue to contribute to human survival. She bridges ancient craft with modern techniques by morphing animal detritus into gorgeous art that quietly contains contextual messaging honoring these necessary beasts. Both her ancestral forebears and reindeer auras are ingrained into the materiality of her work. Juliussen feels, “The materials, once part of a living animal, are brought to life again in her art. Her works reference her family background as reindeer herders in Finnmark, Norway, as well as themes of beauty and mortality (catalog 41).” Three exhibited pieces explain her thesis.

‘Ovdagiehdakuvla or Forehand Ball, 2005’ is a large sphere crowned with bones, made from reindeer antlers, dyed green hair and hide glue. While this sculpture could look nice in a gallery or a home, it also resembles a globe and reminds viewers of the Arctic’s vital functionality to the rest of the Earth.

‘Hornkjede or Antler Chain, 2006’, is made of patinated reindeer antler, bones, hooves, string and earmarking tags. The circular formation of the bones suggests the round pens used to corral reindeer.

The center of the snaking sculpture rises up as if to unite the once alive and formerly tagged animals who are now free, with their universal connection, like all species, to matter and spirituality that make up the cosmos.

‘Multiple Stitches-Sight in Absence, 2016-2017’ are made of cotton fabric, horsehair, metal wire, embroidery, painting, drawing and fishing hooks and are woven cloths resembling portable doors for the nomadic Sámi or just ornamental fiber- hangings. The way they are loosely hung suggests they are welcoming visitors, while uniting both outdoor and indoor spaces as they connect the natural and factory-made worlds that define human existence in good and bad ways. According to Juliussen’s catalog, “The power of an object may stem from tradition as well as from its ability to act as a medium or in ways deliberately provided by its producer (catalog 71).”

This is a fabulous small show, bursting with red, black, blue and green hues, as well as rough, smooth, hard and soft textures, that present a big message about appreciating and caring for the planet.

Mini Sleuth: ‘Aslaug M. Juliessen: Intersections’ is available at the Anchorage Museum or on Amazon.

Jean Bundy aica-usa is a writer, painter in Anchorage