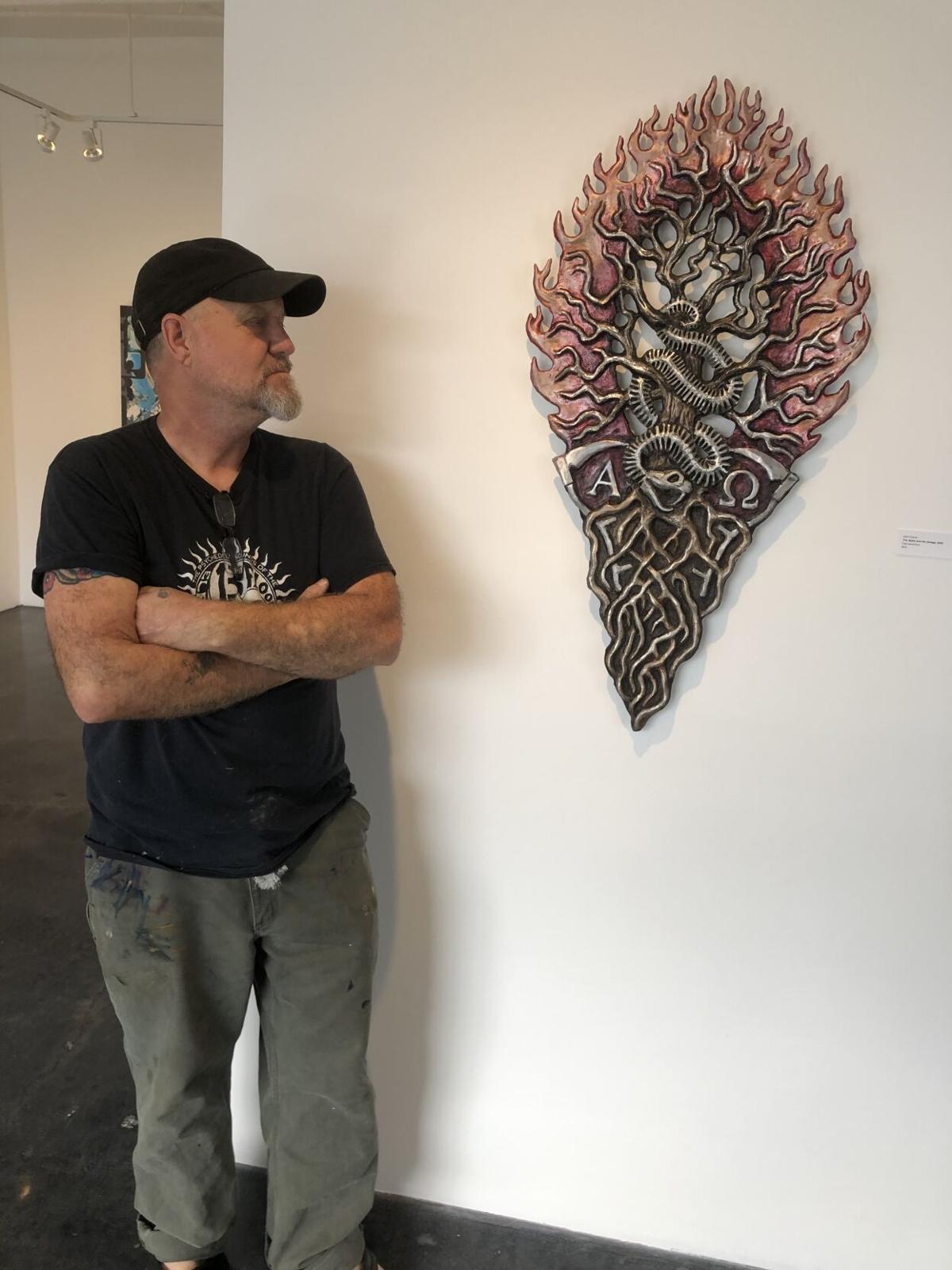 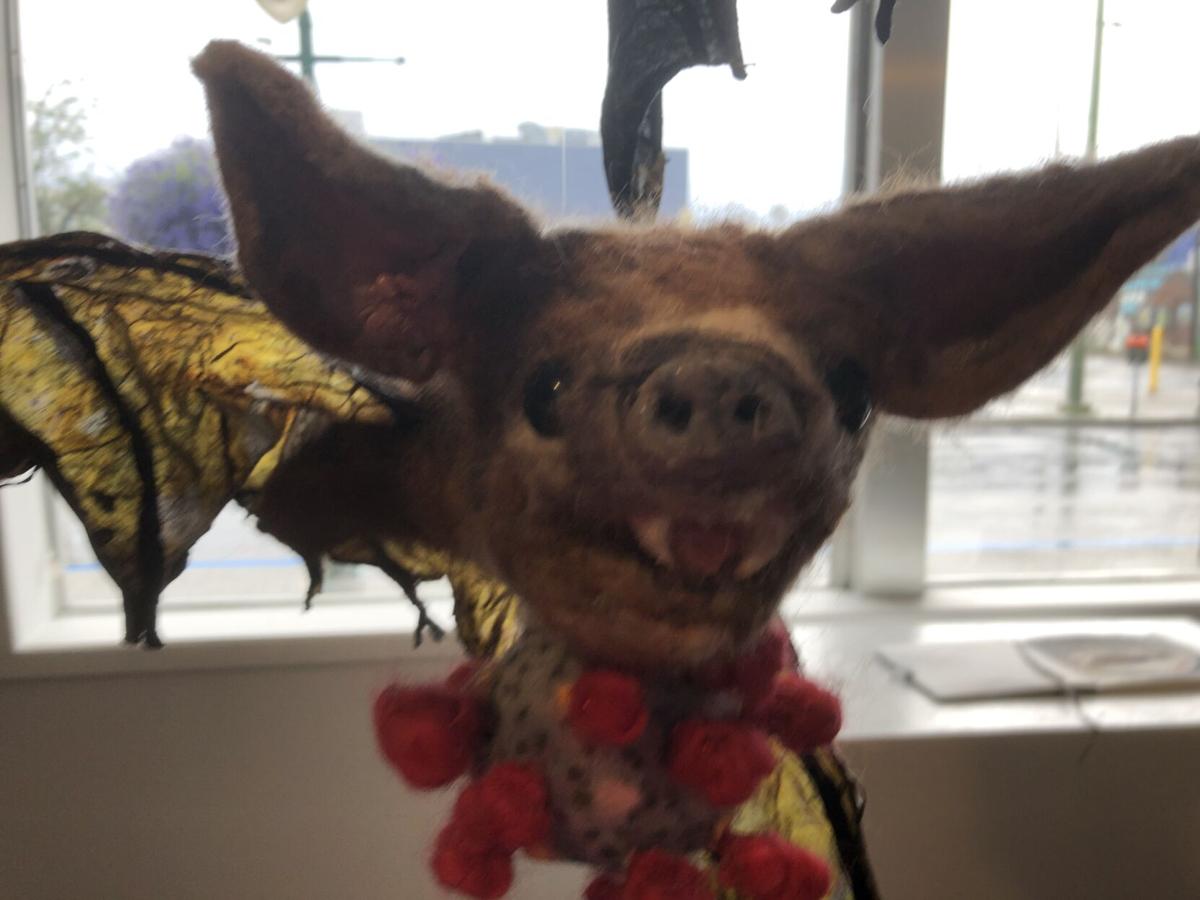 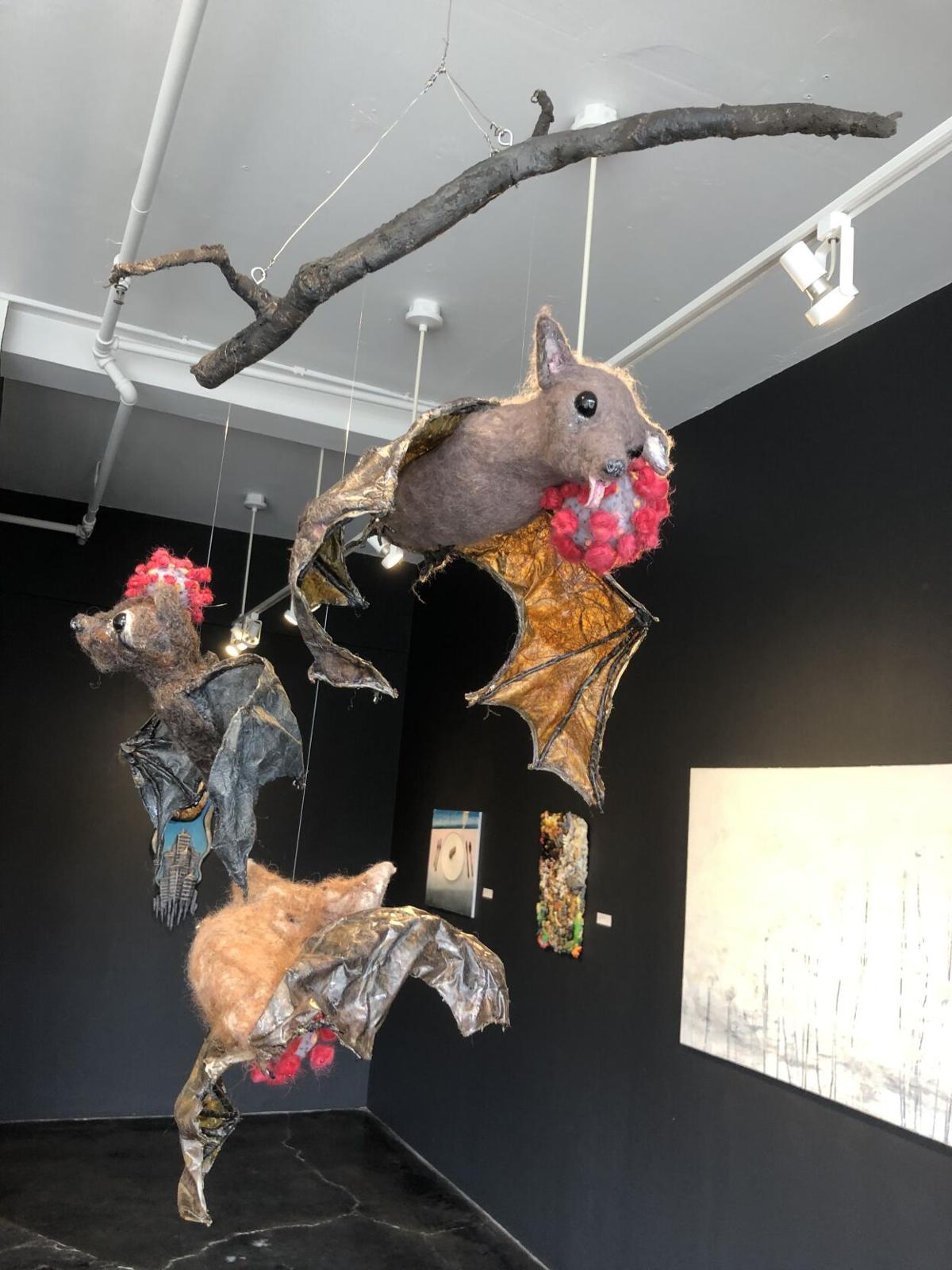 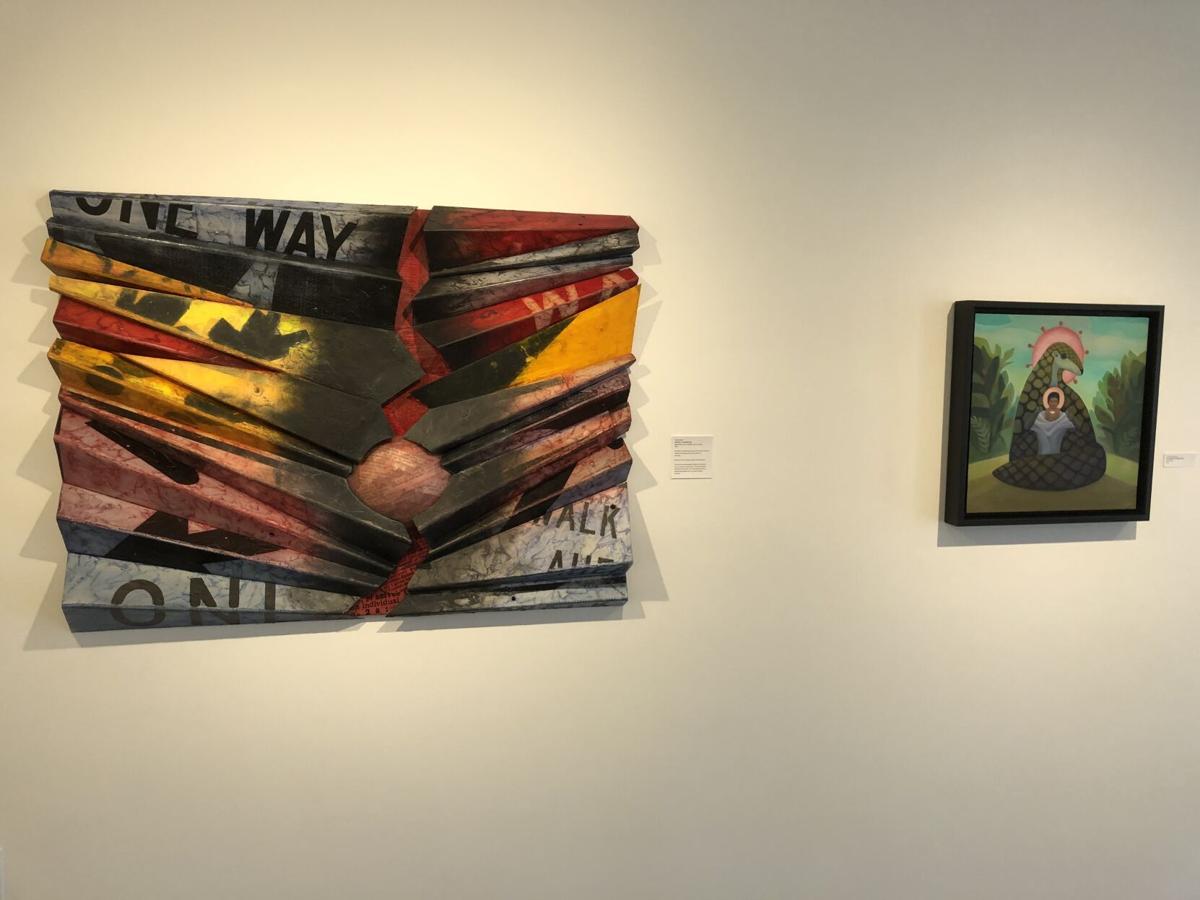 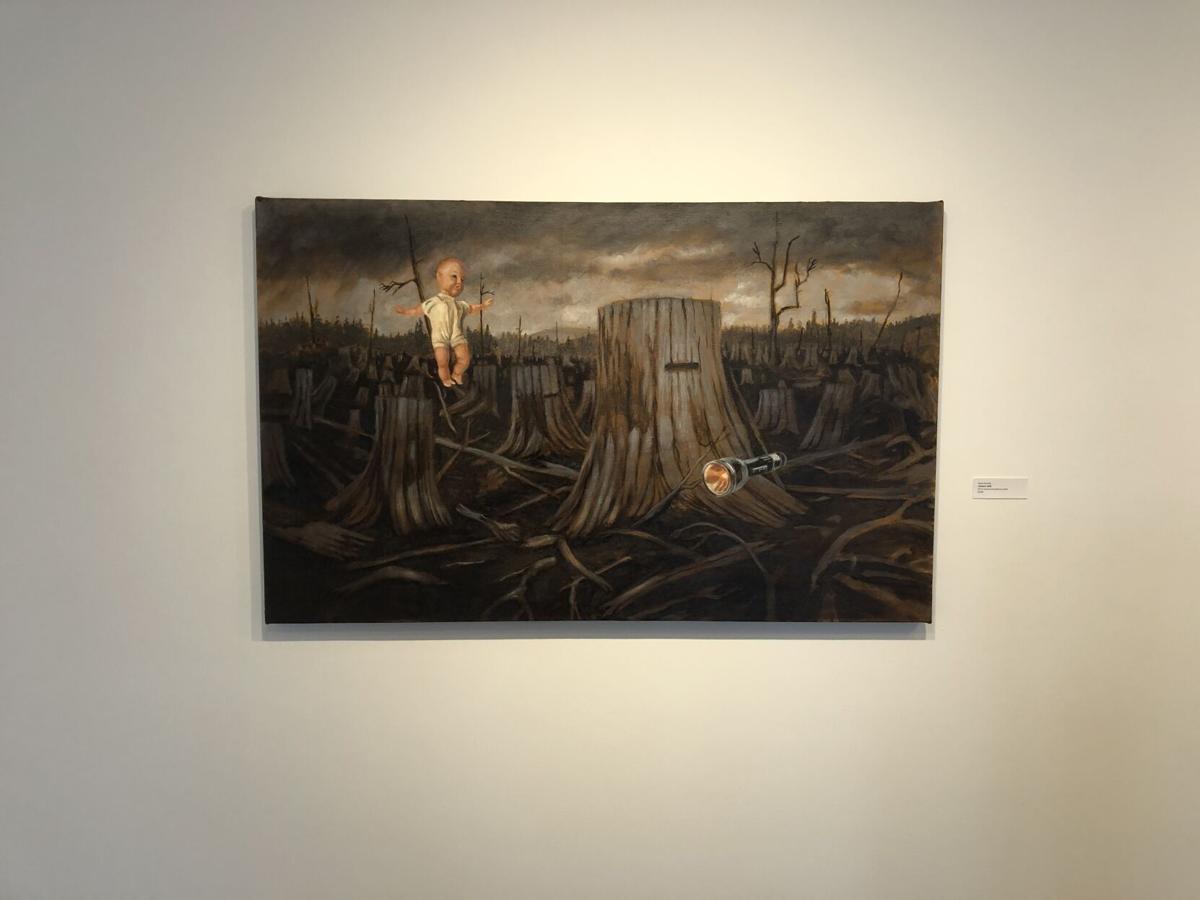 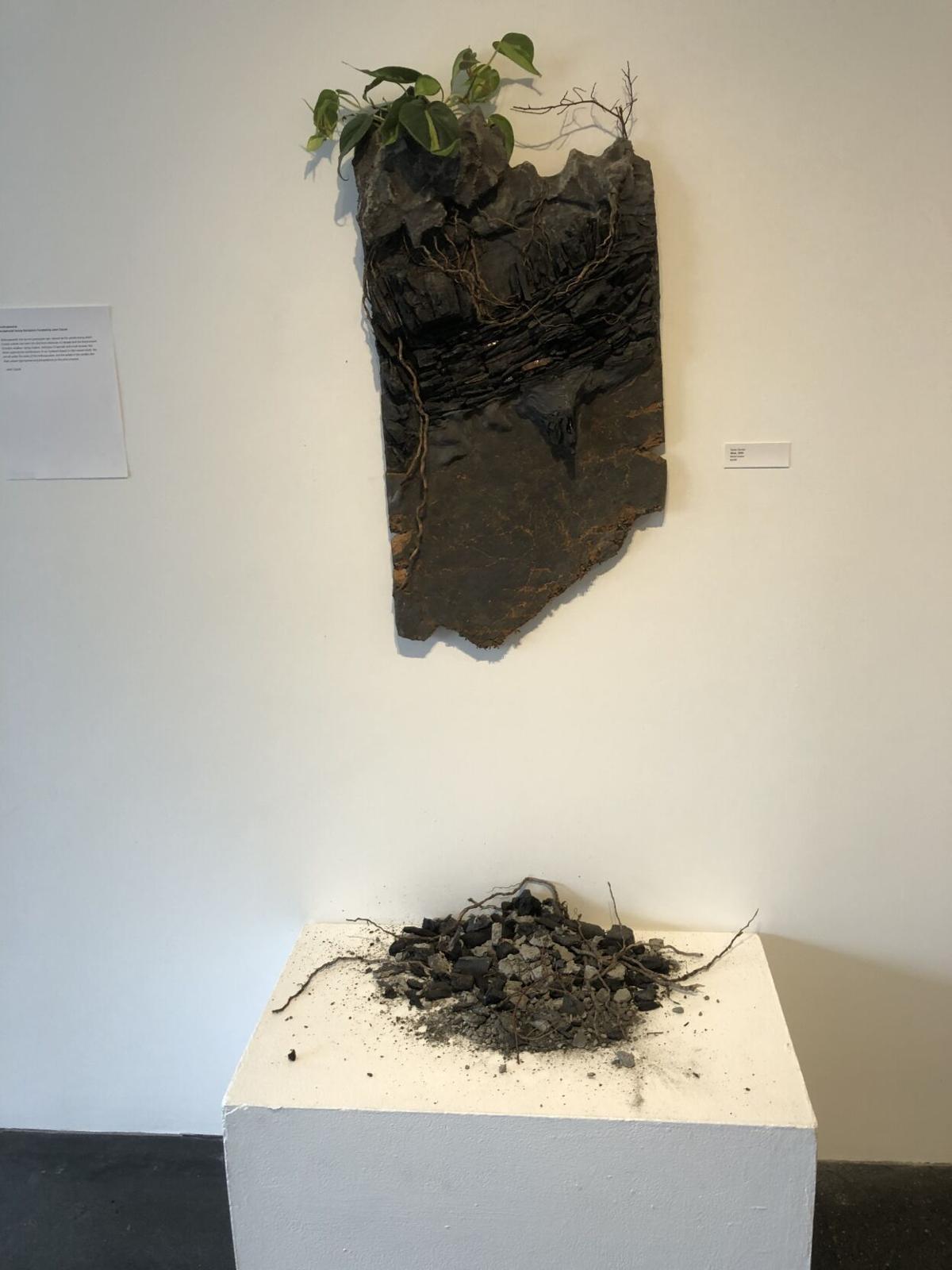 If you’ve seen the sculpture in Spenard of a giant Spam can with a raven perched on it, you’re familiar with the artwork of John Coyne. An excellent painter as well, Coyne’s sculptures are often large and metal. In the interest of observing and discussing mankind’s effect on the earth, Coyne curated an art exhibit at the International Gallery of Contemporary Art downtown, featuring twenty artists, all but one local.

What does Anthropocene mean?

Anthropocene is the current age we’re in, where man has a direct effect on our atmosphere and our environment. We have an outsized footprint right now and because of that, it’s the progenitor of global warming, of course, deforestation, destruction of coral reefs, extinction of animals, wildfires, novel viruses, it’s just a whole list of horrible things.

So this show was pretty much dedicated to the effects of humans on the earth?

Yeah, pretty much, yeah. The Anthropocene. And I instructed the artists when I curated this, I didn’t really want anything didactic. I didn’t want like, “we have to recycle,” or, “we have to get away from fossil fuels,” or anything like that… I wanted them to take those themes, or a couple of those themes and then, pretty much do what they do anyway, but just include the theme into their work. And I suggested, you know, kind of going more towards the darker and phantasmagorical. That was my suggestion. For this show, though, I was really hands-off. The artists I picked, they’re all, you know incredible artists, and I didn’t feel I needed to you know, look at their progress, or make suggestions about their work or anything like that, you know, just, here’s what I want, go for it.

Right, right. And I’m really happy with the results. If you look at the show, you got mixed media, there’s traditional oil painting, there’s fabricated objects, found objects, — you know, pretty much runs the gamut of media. Everybody kind of it seemed, stepped out of their zone a little bit. And also, man, I figured another great thing about this show was a lot of people, or not a lot of people but enough people were, just not feelin’ it. There was sort of a malaise that kind of went hand in hand with being, you know, stuck in your home, and that’s when (COVID-19) first came down and nobody was leaving, and I think this show kind of helped motivate people to make some art.

John walked me through the gallery, pointing out pieces by local artists like Sarah Davies, Sheila Wyne, Kerby McGhee and Edwin Mighell. As the capstone of the tour he showed me a mobile made of large bats amalgamated with corona cells.

And then, this is my mom’s. And she learned how to sculpt in a women’s federal penitentiary. She spent 12 years in a penitentiary, and she worked with whatever she could get her hands on — like, buffing pads and stuff like that. And now she’s in Fairbanks and she has access to all this wool and alpaca and goat fur and shit and she’s going crazy with that. She was all worried, ‘oh, it won’t be good enough for the show,’ and I was like, ‘Mom, come on, please.’ She did a great job; I’m very proud of my mom.

What does it mean to you to have your Anthropocene gallery somewhat scuttled by Corona?

I think it’s pretty fitting. (Laughs) I think it’s a pretty timely show. You know, cause I had introduced the show, or applied for the show and was accepted for it, well before this all went down. And unfortunately, we couldn’t have a First Friday, which was really too bad, because, you know, I love First Fridays in Anchorage. It’s a big social get-together party atmosphere, and it’s great for the galleries and the artists so, so that was too bad. We didn’t even open on Friday, we just kept it closed on Friday.

So they just had regular hours of the gallery that people could come through?

Yeah, we did just like a normal gallery. Well not, normal; they’ve been modified.

Along the lines of the theme, do you think the impact of humans on the earth is destructive?

Oh, yeah, yeah. You know, I’ve gotten in a lot of discussions about this. I’m not an environmentalist; I’m not overtly involved with any kind of politics, you know. Essentially, I’m an observer, and, if you’re, just by being sentient, you can’t help but be aware of the fact that things are going askew. I did a piece called Our Lady of the Vanishing Coral, and that, the whole coral, the whole bleaching and disappearing of coral, is initially what really concerned me because I love to scuba dive and I love coral, and so, so this was a while ago, like before global warming became a real, an issue in the forefront, and so sort of, this subjective thing, ‘the coral is dying,’ and then, ‘why is the coral dying? What else is dying and what are the other implications of it? But it kind of for me, it started with coral.

So you’ve been thinking about this for a while now?

Oh, yeah, yeah, and I’ve seen the effects of bleached coral. You know I was just in Guam a little while ago, and did some diving there and there’s what used to be these huge and beautiful coral fields, are all bleached out now and it’s really sad. And the idea is that if the coral goes, then the oceans go, like coral are pretty much the lungs of the ocean, and the ocean’s gonna suffocate without the coral. And if the oceans go, we go.

It does seem harder and harder to deny humans are affecting the earth. How much, is something we might find out soon enough.