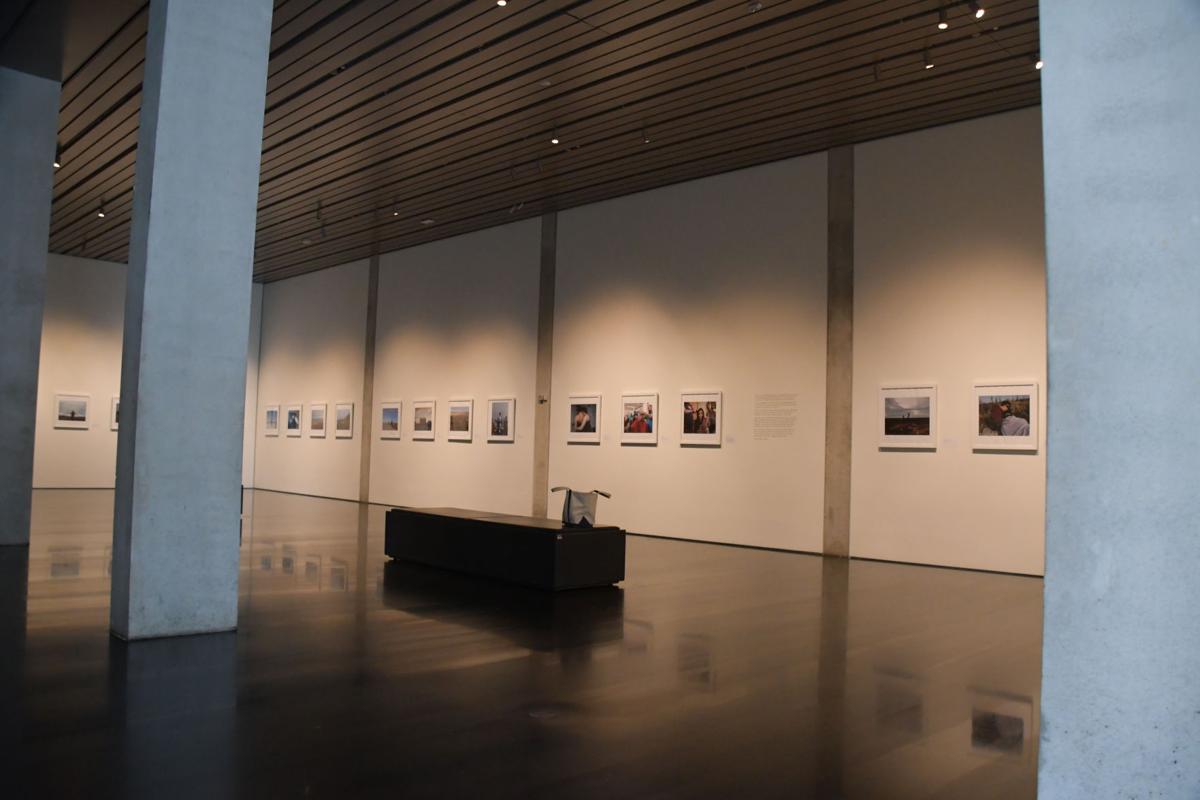 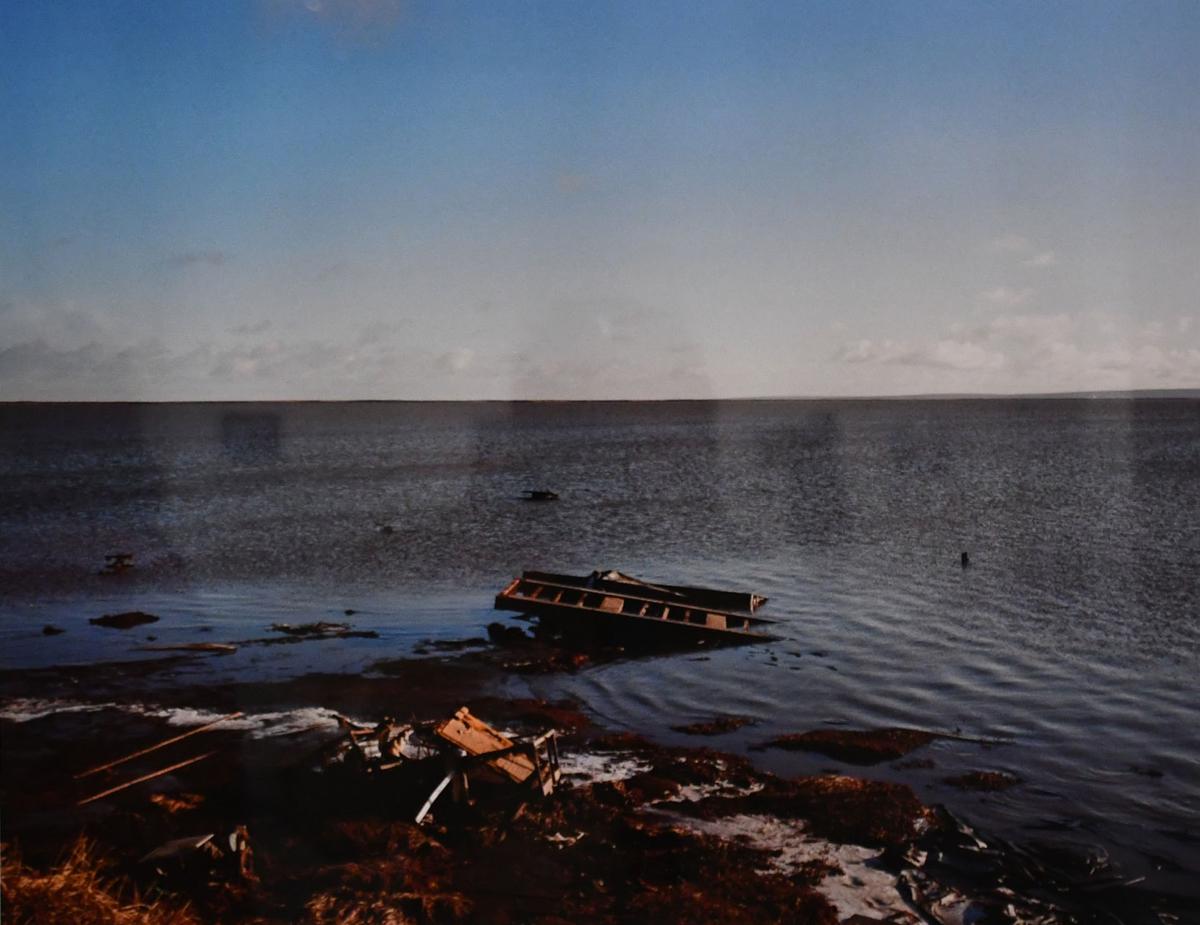 With a mask on and my timed-ticket (Wednesday 4-6 pm) in hand, I ventured into the re-opened Anchorage Museum to sleuth for art, to see what Covid-19 had laid waste, hoping it wouldn’t look like Pixar’s ‘Wall-E’. Gone were the red high-backed sofas surrounding the snack bar, which was, surprisingly, open, but there was no one having tea or eating their big peanut butter cookies (MUSE restaurant was closed). I walked down the vacant West hall to the gift shop and was greeted by a friendly clerk, who said if I picked up merchandise, products would have to be quarantined or cleaned—not an enticing way to shop. Next, I headed into the freight elevator, which now has floor-decals indicating only four riders in this cavernous machine. A tissue box and a trash can nearby were meant to be used when pushing floor buttons. I complied and elevated to the fourth floor gallery.

On view was ‘To Become a Person’ — photographs by Ash Adams, text by Iñupiaq writer Laureli Ivanoff. Many pictures were of Bush teens, playing outdoors, and readying for a prom while texting. According to Ivanoff, “today’s adolescents must also learn to navigate rapidly shifting worlds shaped by climate change, expanding access to social media and technology, and the enduring effects of colonization.”

A few images related to Climate Change really excited me, as artists, especially those living in the North, visually see and comprehend that Global Warming is for real. Ivanoff relates, “When Papa was alive he talked about the weather like it was a person. In the Inupiat life, Sila, the weather, has a spirit. ‘It wants to be windy’, he’d say. Or, ‘It wants to be cold’. I did not know this mindset was progressive. Papa respected the weather. Inupiat live by the seasons. The weather decides for us our actions for the day. Papa would stand at the beach, look out to the ocean and accurately forecast what Sila would do for days ahead. He knew her signs. Today fall storms swallow our land. The ocean warms. It rains in January. The ice, once a reliable friend, is unpredictable. I wonder what Papa would say today about the spirit, he once knew so intimately. The rapid change means change for us. Starving birds. Scorching summers. Forced relocation. Starving seals. Sea walls. Dying fishes. Sinking tundra. The forces of change do not stop. We’ve adapted for centuries. And we will continue. Yet, I feel her signals. She is telling the world to adapt. She is demanding respect.”

Ash Adams photograph ’Newtok, October 2018’ is a gorgeous 3-tiered landscape that places the viewer on shore, looking out, forever. But it also illustrates what is happening to parts of the North — remains of someone’s home, and their narrative, which collapsed into the acidic-warming-rising ocean, has become driftwood. The caption reads, “Debris from a home floats in the water off the coast of Newtok. Residents have watched the coastline creep closer and closer inland for decades, and in 2019, relocation began to the village’s new location at Metarvik.” This occurrence is denied/dismissed/overlooked because it exists in the Bush—not our problem!

Another Adams photograph shows a youth playing on sun-bleached carcass of a whale. Closer look, the seated child becomes part of the jaw bone—life recycling. The mammal was caught to feed a village and now its remains become a jungle gym, as kids are good at remaking objects into toys. Bones also become an environmental sculpture, a monument to subsistence, but also a history lesson of past whaling days when ships from New England plied these waters in search of Leviathans, that fueled the Industrial Revolution, the beginnings of Global Warming, and sadly justification for Native abuse.

I left the exhibition and elevated down to the Art of the North, and Alaska Galleries. I saw no one but one guard who seemed to be commuting between all the galleries. It was comforting he recognized me, even masked. I also passed numerous stations of hand sanitizer. I imagined what Warhol would have thought with all these labels legitimately positioned in the hallways. I surmised Pop artist Claus Oldenburg (b. 1929) fabricating a giant ‘Purell’ bottle. I descended the atrium stairs. Decades of coming to the Museum flashed before me. I baby-strolled daughter Jenn into the original Anchorage Museum, a single story big enough for one exhibition of local painters with a pianist playing in the rear. As a student at UAA, I drew lots of the artifacts up in the history galleries (the second remodel) for Joan Kimura’s illustration classes—Russian samovars, whaling harpoons, Tilley Reeve’s Model T. I went to high school award ceremonies for my kids, weddings and even funerals in the atrium. Yes, I have been to the Metropolitan, and the Louvre, but there is something about a home town museum, which you can pop into on a whim, and discover the pulse of a community. This past March, I reported on the Anchorage School District’s 2020 Student Art Show where the noise of students showing-off their prize works to excited family members wafted up into the atrium cupola. A week later the world would change as the Virus spread across America, schools went online, and everyone was asked to shelter-in-place. My two hour timed visit was about to end. Leaving the museum, the silence was deafening. I can’t believe I miss the energy that a crowded gallery exudes. On the other hand art can really bounce off walls when no one else is sharing the exhibition walkways. Ok, it’s different, but the Virus can’t stop aesthetic creativity--I’ll be back!

Excerpted from ‘To Become a Person, is Ivanoff’s poignant verbiage, which addresses all cultures, “Indigenous knowledge and values are tools for confronting the challenges that lay ahead.” Go to the website and buy a membership or purchase a timed-ticket—don’t let ‘Corona’ spoil a visit to the Anchorage Museum, especially this summer.

Jean Bundy is the Climate Envoy for AICA-INT.