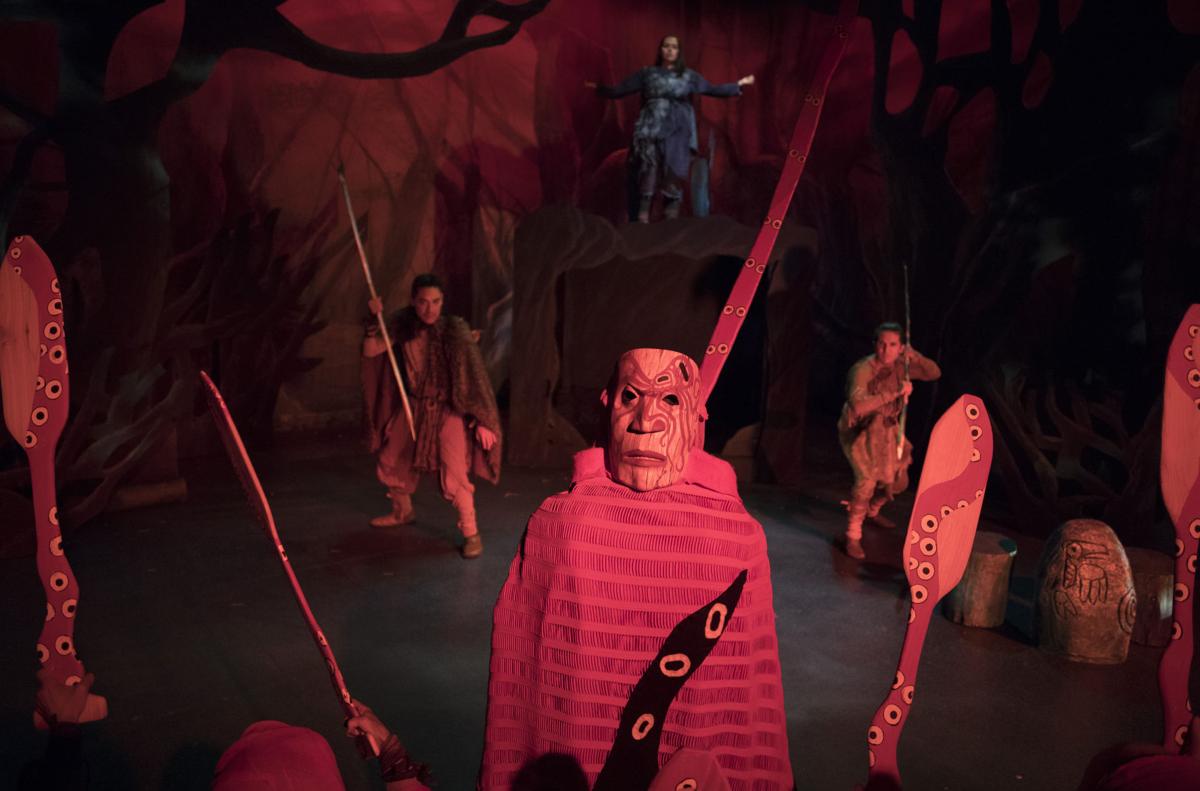 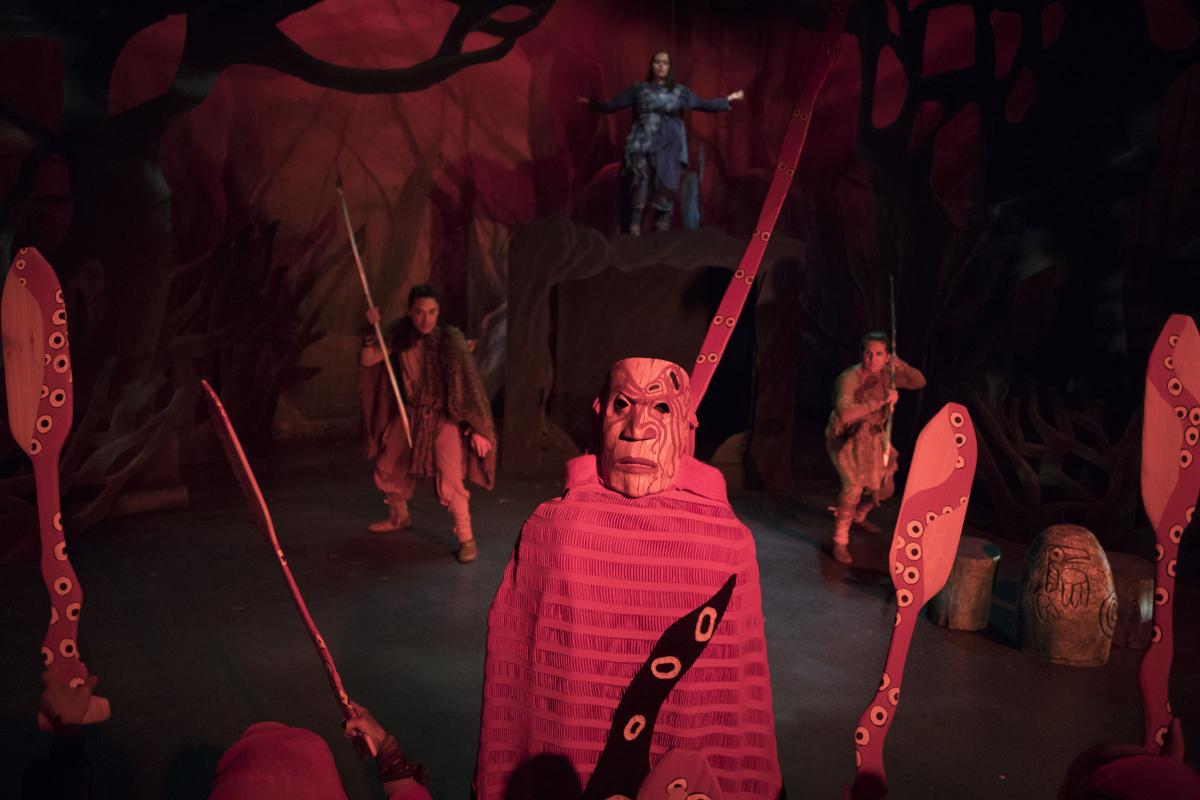 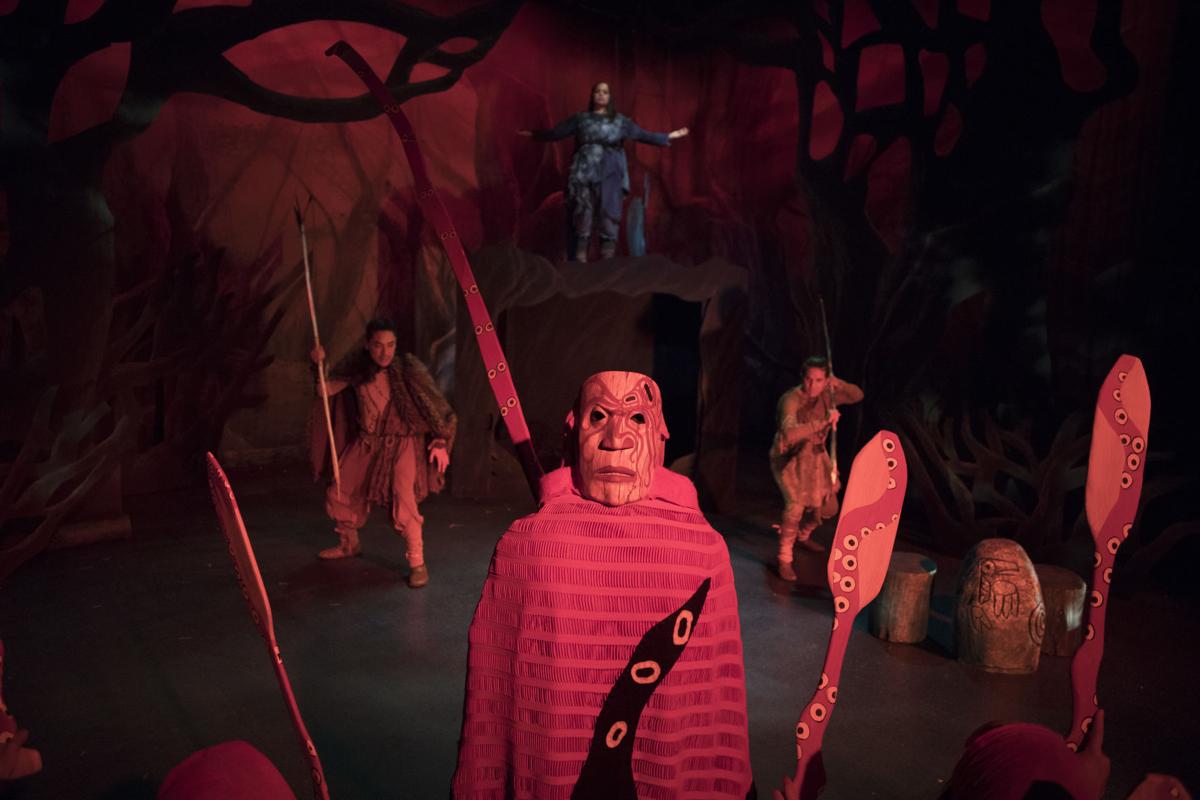 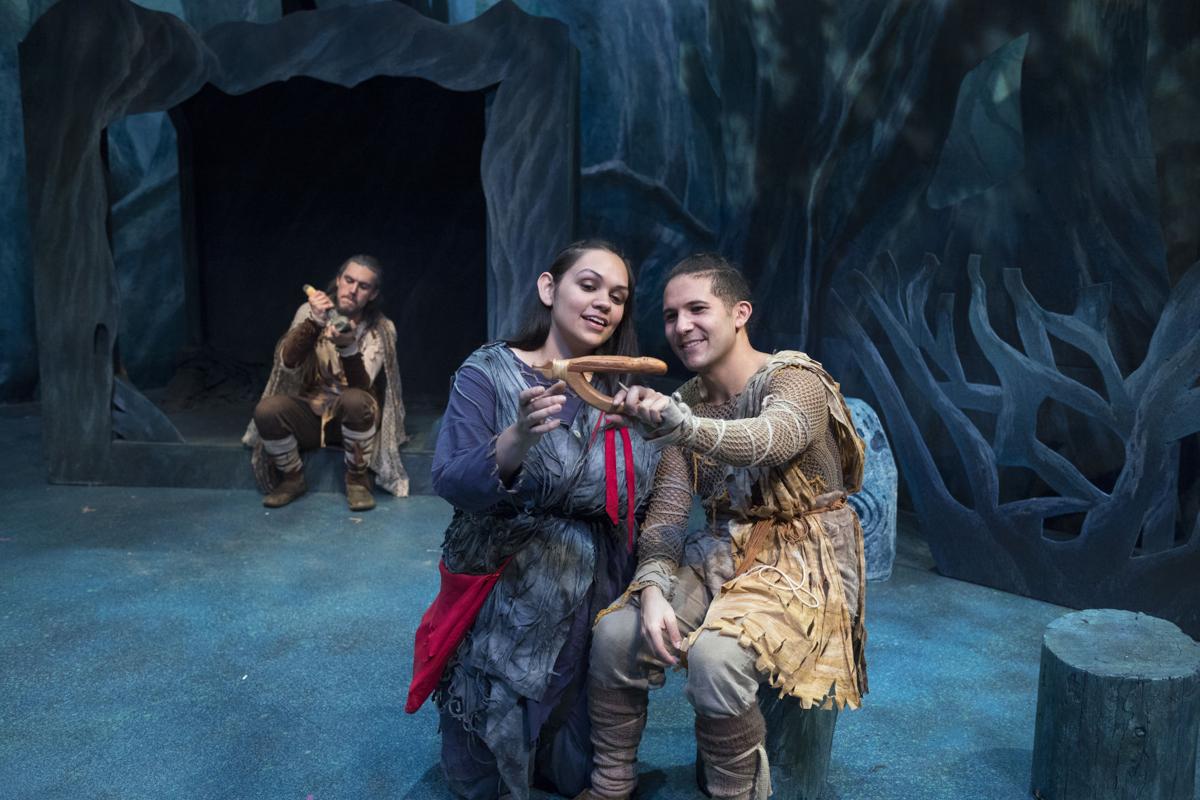 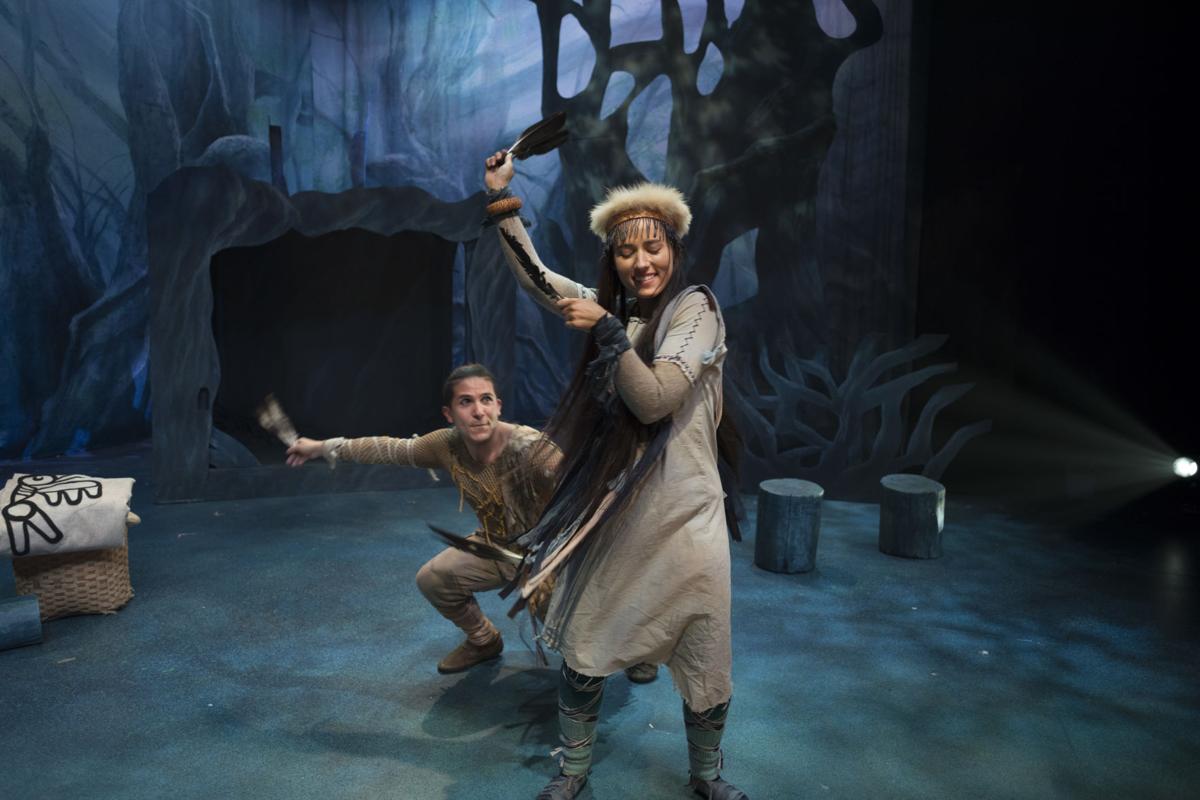 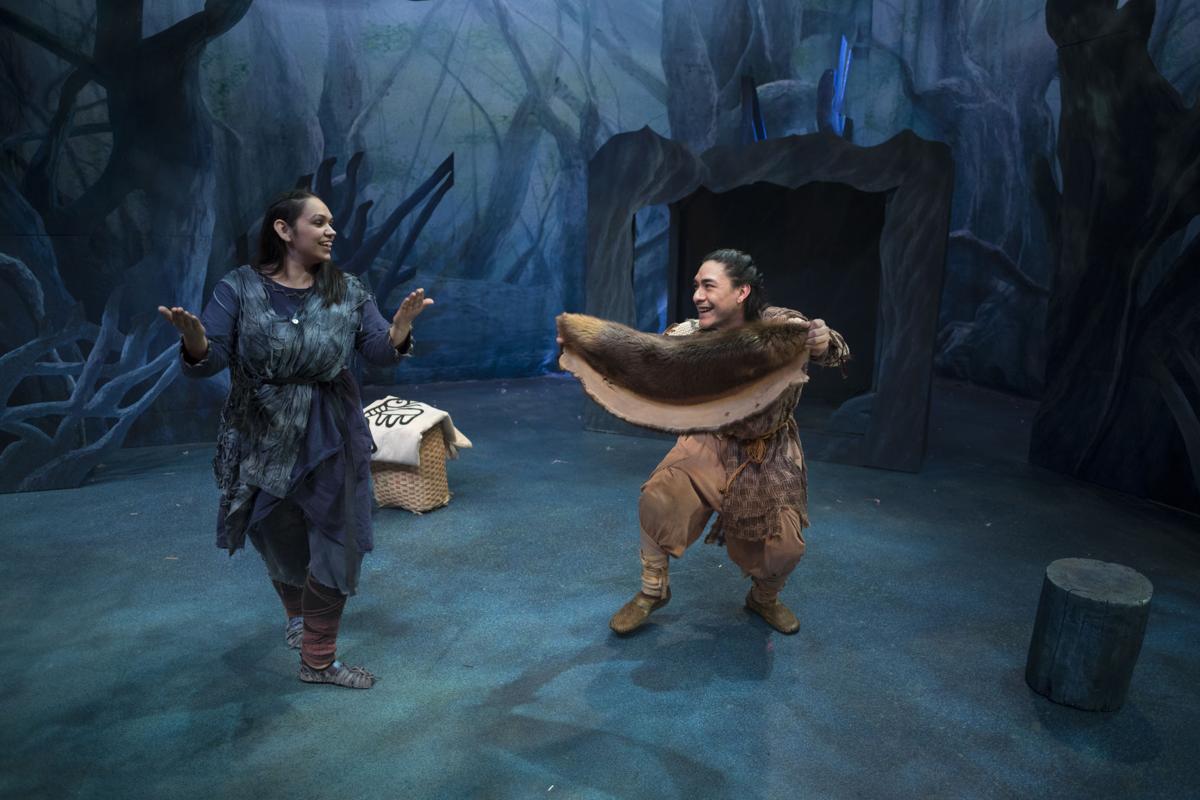 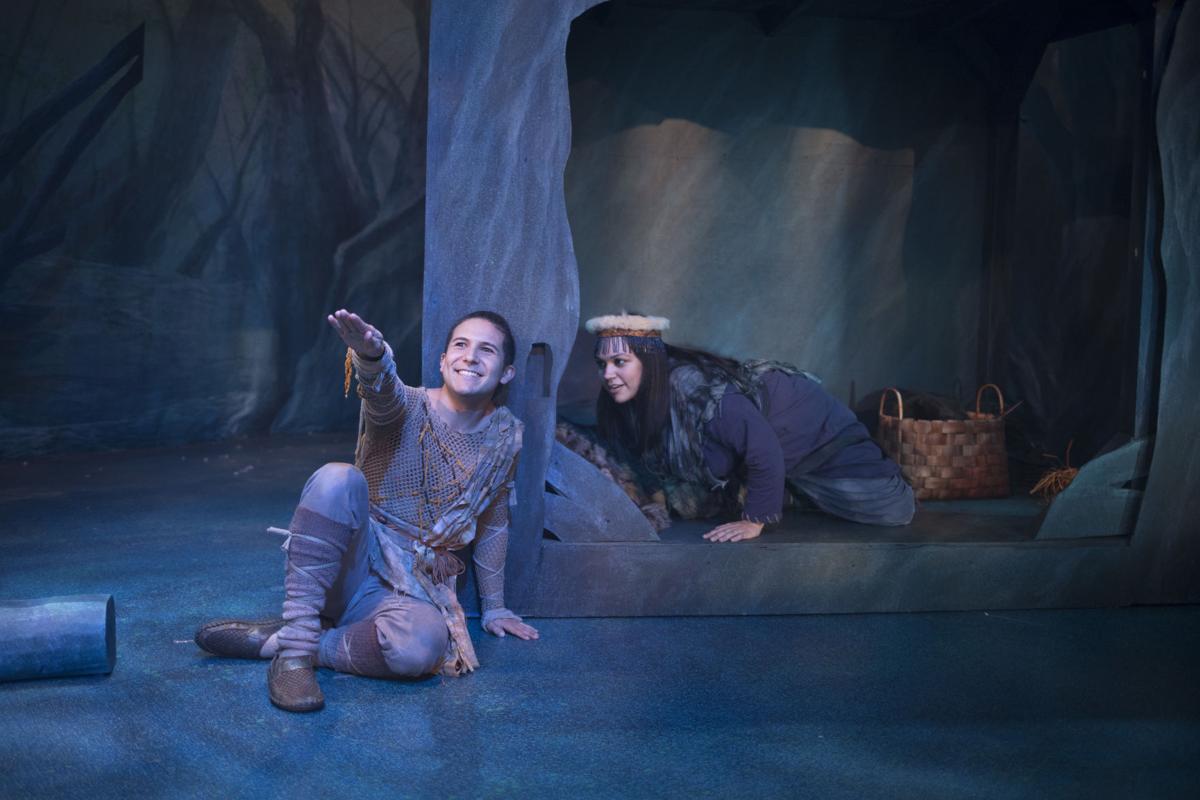 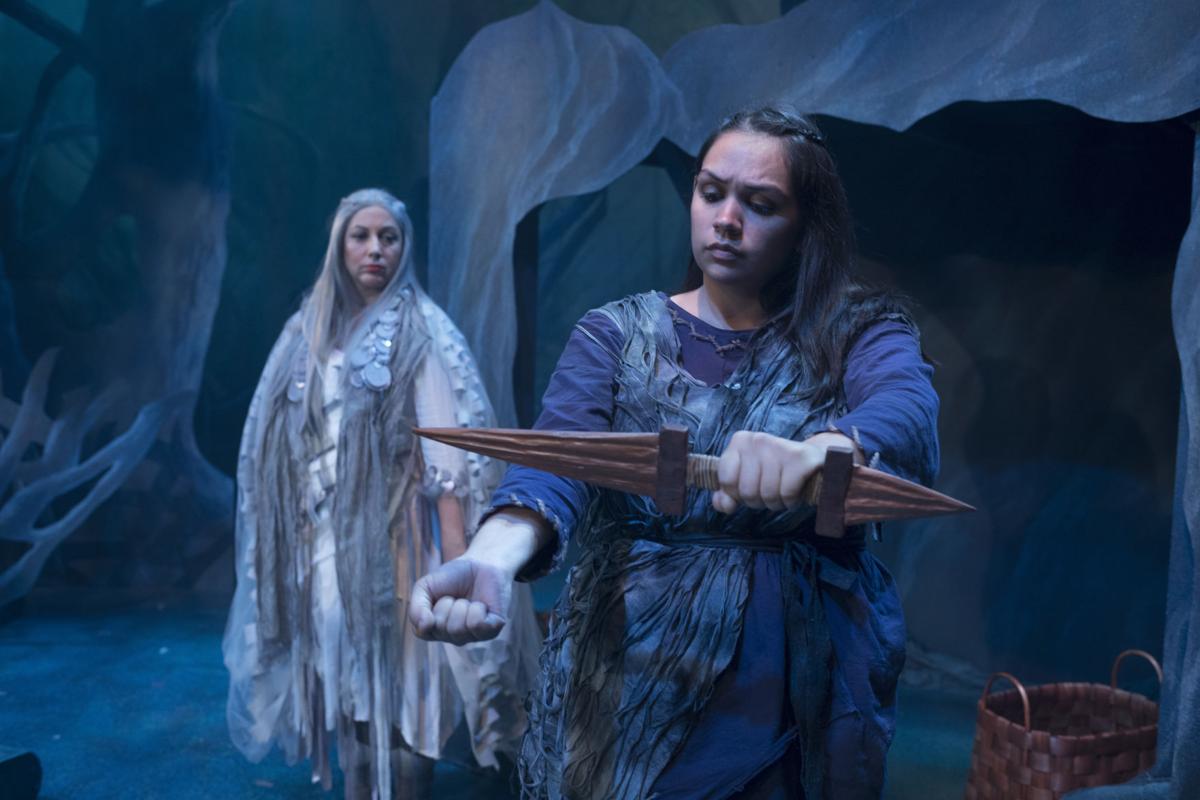 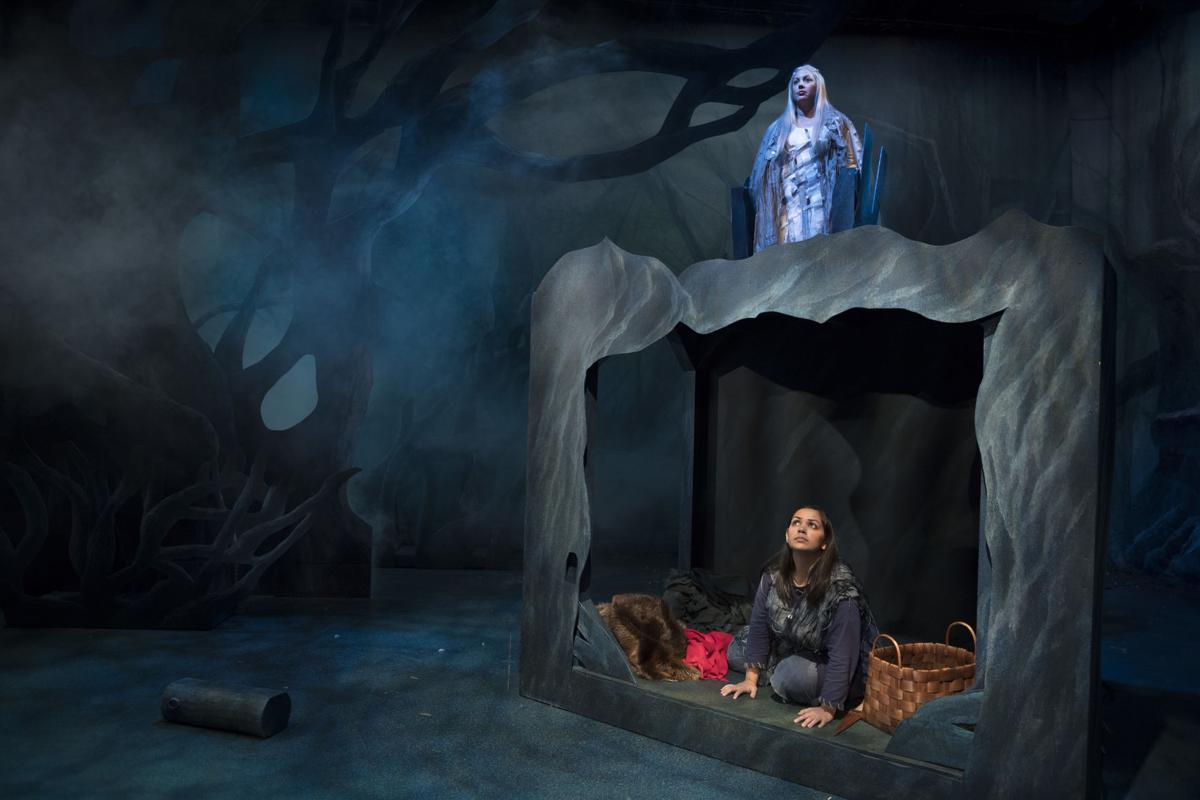 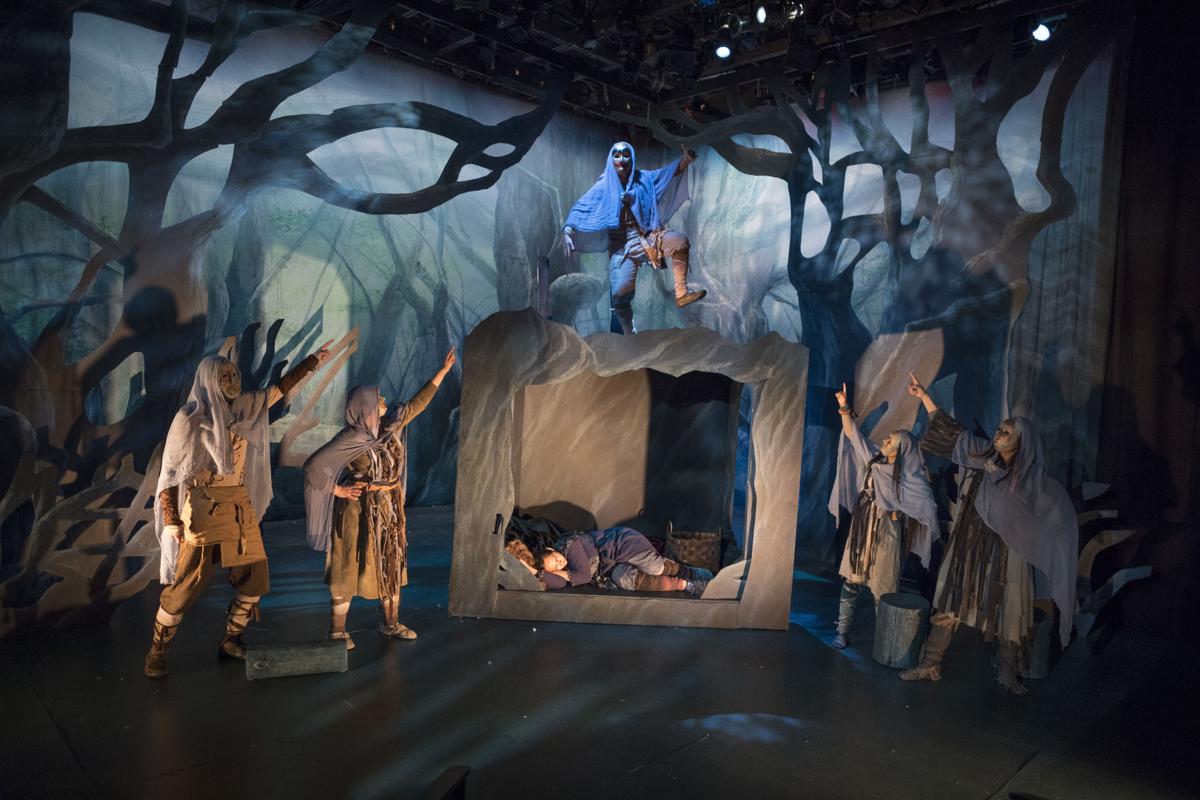 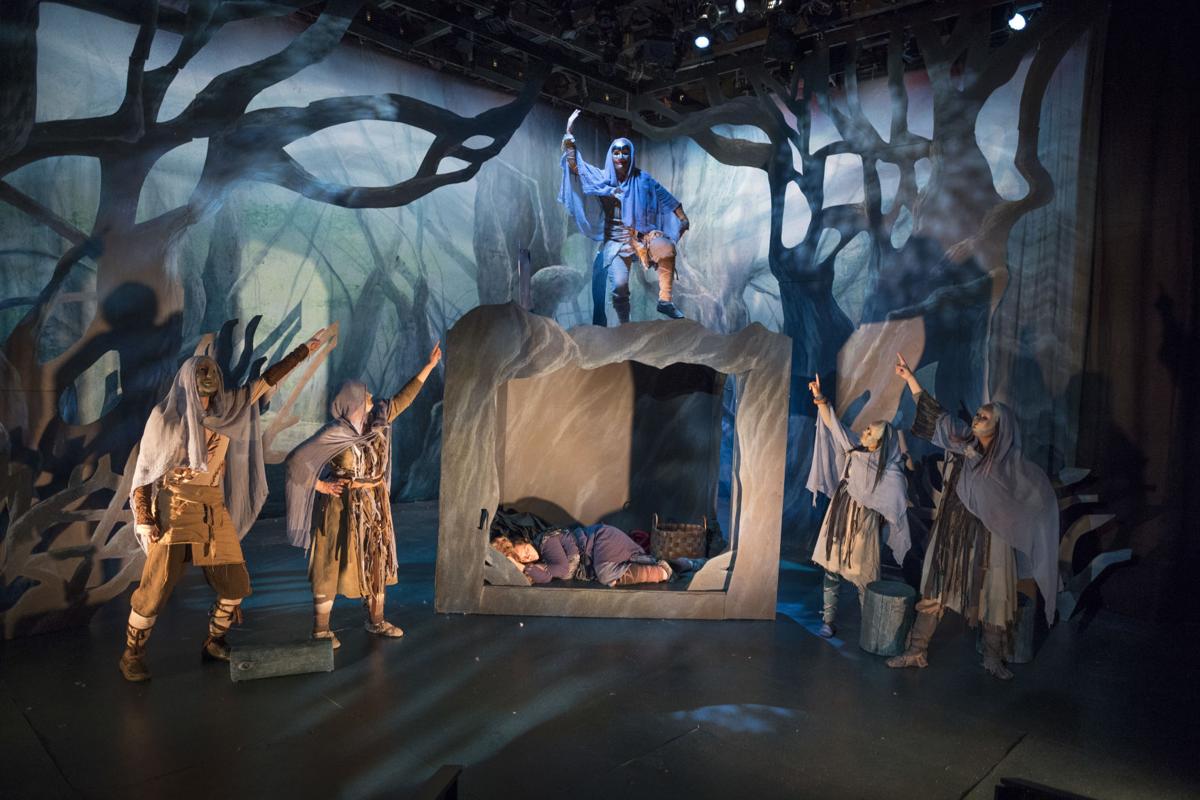 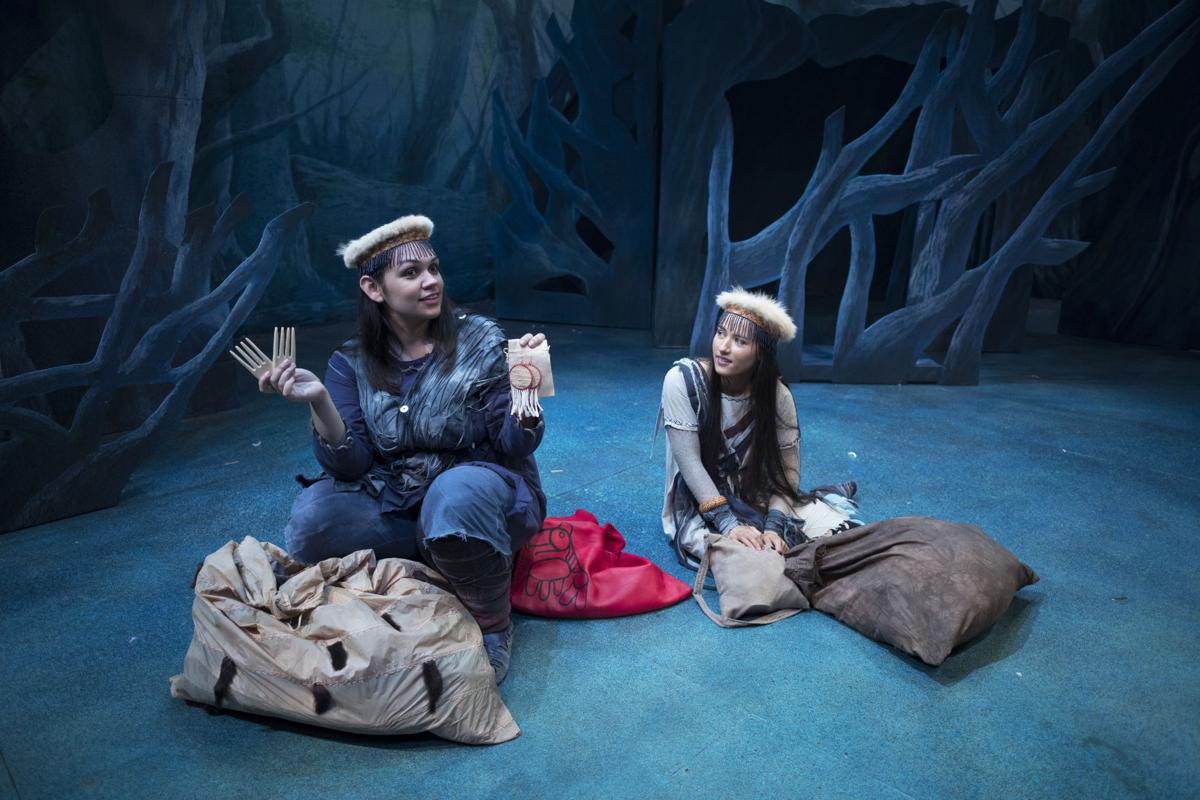 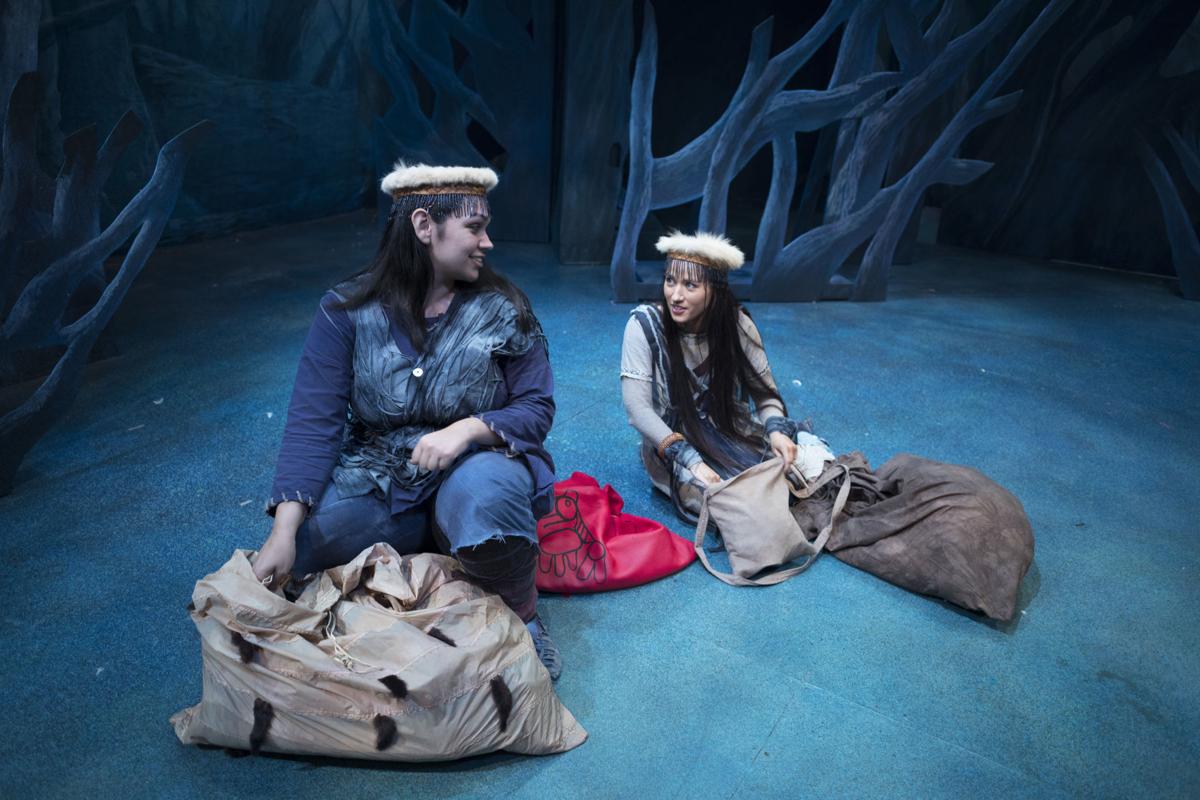 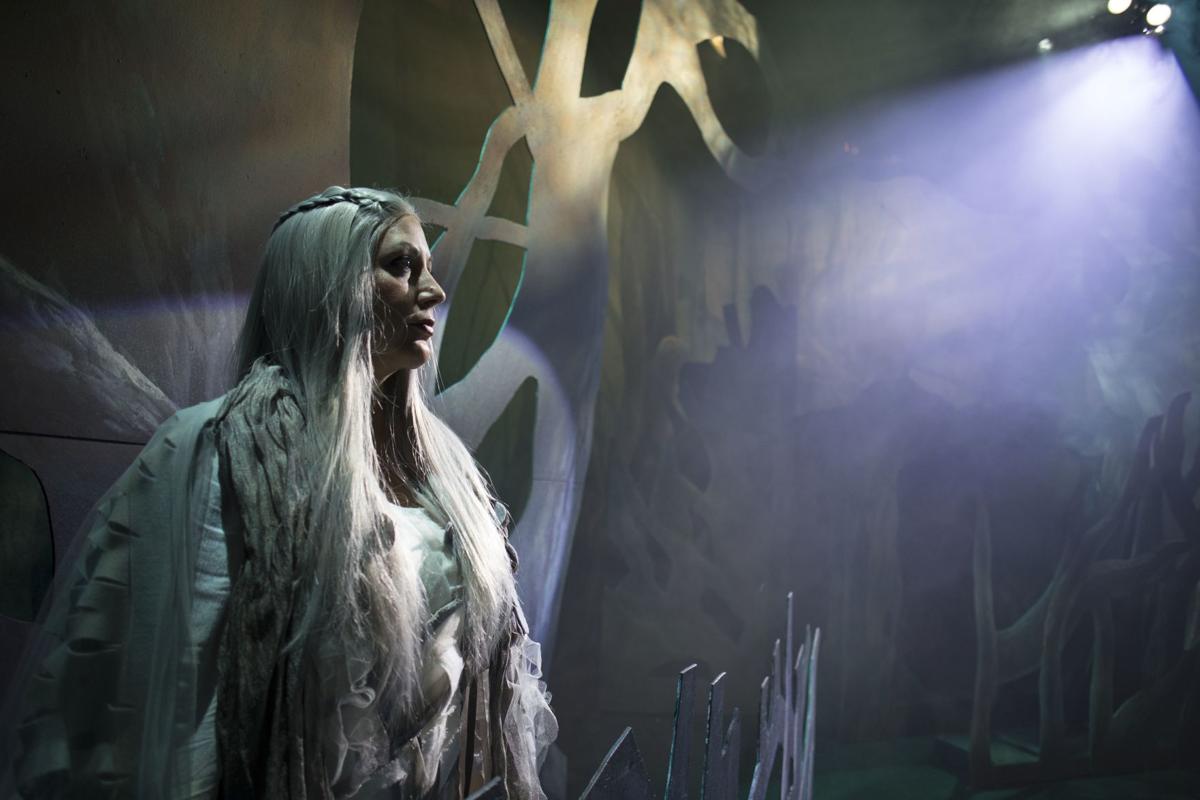 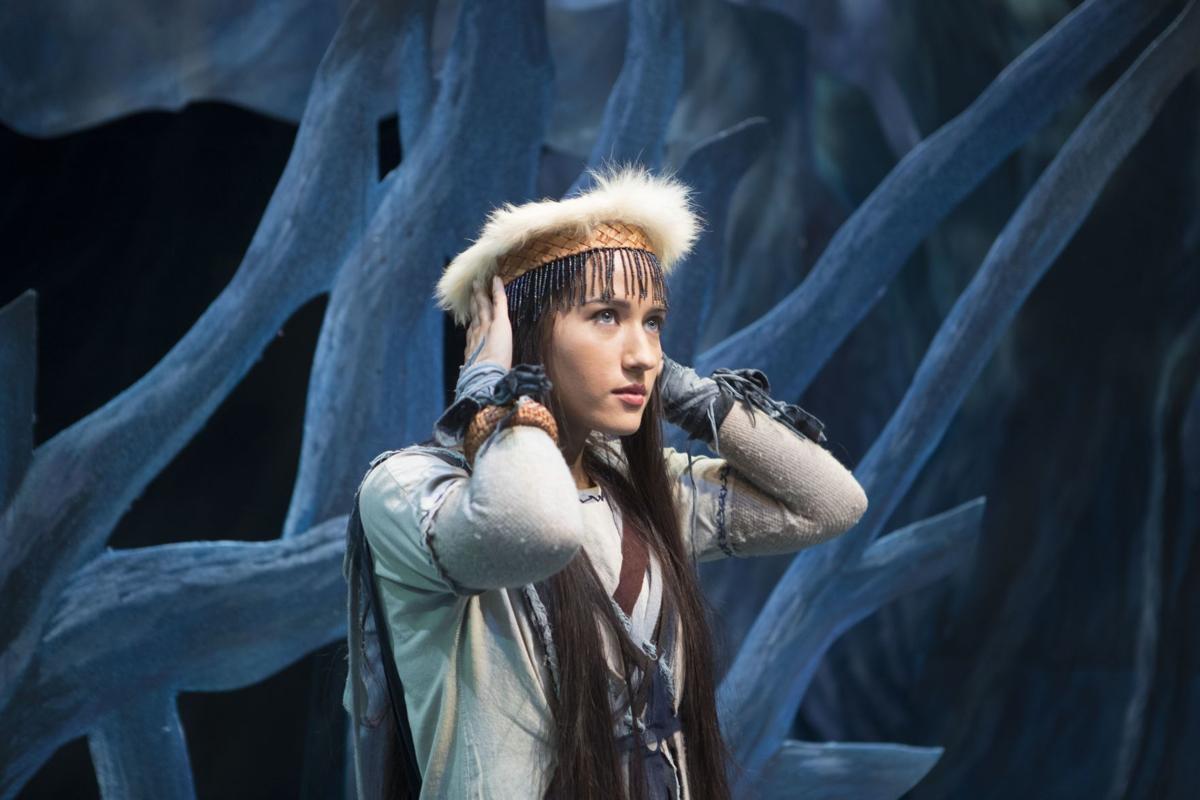 Anytime there’s a poll taken of critics, the film that invariably rises to No. 1 is Orson Welles’ 1941 classic ‘Citizen Kane’. Reasons cited tend to be how far ahead of its time it was both in terms of storytelling and production, but there’s another thing that sets it apart — Citizen Kane is about everything.

In ‘Devilfish’, the Perseverance Theater show that opened its Anchorage run last weekend and concludes this weekend at the Sydney Laurence Theater, playwright Vera Starbard has taken that concept of being ‘about everything’ to entirely new levels.

In the briefest and plainest synopsis, ‘Devilfish’ is about the Tlingit world of 10,000 years ago in Southeastern Alaska. A girl from one village is the lone survivor of an attack by the Devilfish, which is a giant octopus, known elsewhere as a kraken. She assembles the belongings of all her fellow villagers and paddles up the bay to the home of the Raven people, who marry her off to one of the tribe of the more recently arrived Eagle people to forge a peace between the two.

Her coming-of-age journey teaches her about love, loss and redemption.

But what Devilfish is really about is wealth — how it’s valued and how we value people by it; the tangible and intangible differences that make the child become adult; the battle of the sexes in relationships and in roles in governance; the value of technology vs. brawn; marriage for political expedience; and ultimately the close bond between guilt and selfishness.

Stylistically, Devilfish is a breakneck roller coaster between fairy tale, slapstick comedy, psychedelic terror, romantic comedy, adventure, tragedy and if that weren’t enough, the audience is literally and physically dragged part of the experience, too.

Prior to the show’s start, Starbard with the cast on stage tells the audience of the Tlingit tradition of stamping feet quickly to express applause rather than using one’s hands. Throughout the show, the audience has clear and present opportunities to do this and just before intermission, the crowd is even bestowed gifts by the actors themselves.

In one of the most creative uses of swag one will ever see, the wedding scene leading into intermission involves the cast handing out small bags complete with a small card promoting the show as well as a tube of lip balm and a Hershey’s Kiss, meant as a gift to the wedding guests, but also serving as a bridge between the ancient world and a Chamber of Commerce expo at the Dena’ina Center.

“That’s a very traditional Tlingit practice you would see,” Starbard explained. “It’s been a challenge because the theater is very transactional — I pay a ticket to see this product, so it’s a kind of feel that is not very indigenous. When you see a Tlingit dance or song… maybe a public celebration, gift-giving is just part of that. A Native gathering though will usually go hours long, if not days… It’s the feeling of being taken care of. If you were to be part of witnessing two people coming together, you insure a good marriage by receiving a gift.”

The wedding scene also marks the first point in the show that any Tlingit language is used.

Taking place not only before colonialism, but thousands of years before it, did allow Starbard some freedoms she hasn’t had in her other plays, most notably, ‘Our Voices Will Be Heard’, which was set in the late 19th century and dealt heavily with child abuse.

“I just think that in so many Native stories you are forced to talk about the non-Native aspect,” Starbard said. “It gets exhausting having to always highlight your culture in comparison to another… That culture was always there… I get a lot of comments about how sophisticated (the characters are) because it’s often seen that sophistication didn’t come to our people until White people. But it was always there and you certainly look at how we lived with the land. It wasn’t snow white with deer tripping around us. People had to find really creative ways to deal with a very harsh environment where life and death are part of every single day… It was freeing in that we only had to talk about us and celebrate us.”

Neverminding the cultural stereotypes, the characters in Devilfish speak in a language so modern, philosophical and erudite it belies any vision of any prehistoric culture. It’s an anachronism that works because it reminds the audience that life and its conundrums don’t fundamentally change, only the people do.

“We have this idea that a long time ago meant unsophisticated,” Starbard said. “But these people had to be incredibly innovative. I did mess around with the language a lot… 10,000 years ago we had no idea what the language sounded like, so we made it really accessible to people now.”

Devilfish began as a novel Starbard completed 10 years ago. She spent three-and-a-half years piecing together the play. One hurdle in that attempt was depicting a giant octopus coming out of the water to murder an entire village all on a Perseverance Theater budget and stage.

“I had no idea how we would do that on stage, but Art Rotsch, who was our artistic director said ‘somebody will figure it out.’ Up until rehearsal we had talked about doing a projection with shadow, sound and light,” Starbard said. “Then our choreographer came in and said, ‘no, this is a dance.’ I never really thought about it being real people until he came in and said, ‘this is how it would work 200 years ago’ with the mask, dance, paddles and the regalia.”

This dance of death choreographs against an eerie tune composed by musical director Ed Littlefield and the monster itself is represented in a black and red being with an evil backwards-facing mask. The tentacles are represented by a long cane that almost looks like a candy cane that pulls its victims to their deaths almost like the cane on an old vaudeville show that would pull away an entertainer being booed off the stage at the Apollo Theater, as it were.

Starbard said this method of throwing everything but the kitchen sink at storytelling is a decidedly Tlingit thing.

“It was an educational commission so ultimately it all had to make sure that what was happening was meant to teach something and in true Tlingit fashion I said, ‘then let’s teach them everything,’” Starbard said. “To me, the core of it is Aanteinatu’s journey. It is her dealing with trauma, how to be a woman and all the funny and ridiculous things, but when it really comes down to it it’s about teaching people Tlingit and Alaskan Native values. A lot of times that involves teaching really scary stories. The original Devilfish stories, quite a few of them — most of them end up with the whole village being horrifically killed.”

Life will go on for Devilfish after this weekend.

“Today (Tuesday) I’ve been asked to bring it to three different communities. It will all come down to funding and interest and where it can go — hopefully with the same actors,” Starbard said. “We have talked with the choreographer and composers about taking just the songs and making it a half-hour story of its own, each performing those at AFN or celebrations in Juneau.”

If Devilfish catches on, it could have a life much bigger than that, though.

“My sister-in-law has a production company and she really wants to see it turned into a movie,” Starbard said. “But one thing at a time.”